As requested, here’s the direction to the famous Seafood Pork Noodles of OUG, Old Klang Road.

Price ranges from RM4 to RM6.

You have a choice of soup or dry version. As for noodles, you have a choice of mai fun, kuew teow, lou shu fun or mee. It comes with minced pork, prawns, clams (lala), slices of pork, seaweed (on request), pig intestines, cuttlefish (sotong) and so on. 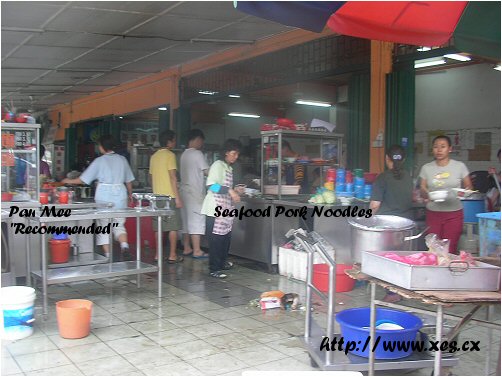 Recently I’ve been eating at this coffee shop before going to court. It serves really great toasted bread with kaya (pandan paste) and butter and also yummy breakfast set!!

It’s also very popular among lawyers as it is located opposite the Malaysian Bar Council.

Other than their toast bread, their Hainanese chicken rice and pork chop are excellent.

Their service is sometimes quite terrible. I have, on couple of occasions, got screwed by the Indonesian waiters.

Me: Eh, Ada butter tak? (Do you have butter?)
Woman: Mengapa tadi tak cakap??? (Why didnt you ask for it just now?)
(walks off)

I thought she would come back with butter, but 10 mins later…no sign of my butter..fugger..

However, complaining to the boss would be of no use at all because the boss is worst than them…

Chuo Ming overheard a conversation between the boss and a Caucasian tourist.

Tourist: Hi..what does this say in the menu?
Boss: Read it yourself. I got no time to explain to you. If you dont like it, go to another restaurant.

Priced @ RM4 for a small bowl and RM5 for a large bowl, you’ll first find it weird to have peanuts on your noodles. But once you have a taste of it..oOoOOooohhh…you will want more.