You may remember my blog postings about the Straits Settlement Court documents. I now have one from Kuching dating back to 1939. 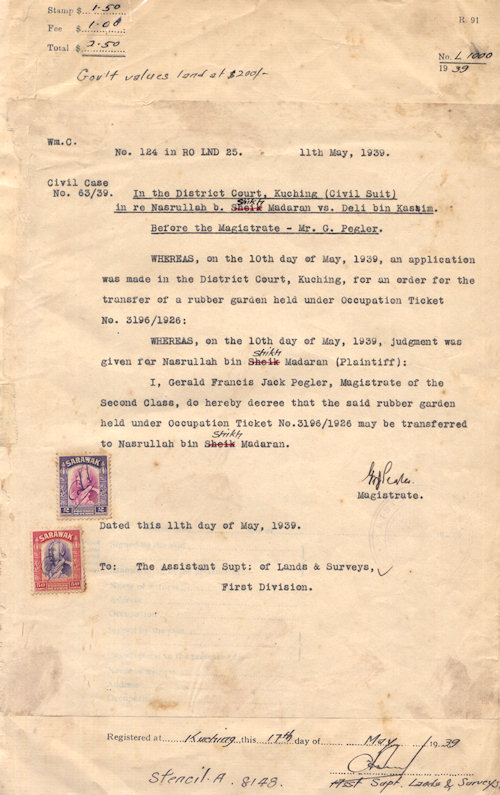 The person featured on the stamps is Charles Vyner Brooke, third and final White Rajah of Sarawak. This stamp was produced from 1934 to 1941. There is little value in these 2 stamps.

This Court order as a whole, however, is quite valuable. There are not many old Sarawak Court documents available in the market. This document was initially priced at RM400 which I have reduced to RM200 after bargaining. RM200 is still a little bit expensive considering that it only costs me SGD15 for my old Straits Settlement documents. However, I believe it is worth it as there is only one copy in this world.

This Court order was signed by Mr. Gerald Francis Jack Pegler (later Lieutenant) serving as a Magistrate of the Second Class of the District Court of Kuching. Not many information is available on Mr Pegler.

According to RootsWeb and the Roll of Honour websites, Mr Pegler was born around 1909.

He was married to Eve Lilian Dalton in or around 1936. They then had a daughter by the name Jennifer Gaye Pegler who was born in Singapore in 1939.

Mr Pegler’s name was mentioned in a few times in the old Singaporean Straits Times. On or around 13 May 1930, he was appointed as a cadet in the service of the Sarawak Government – then ruled by the White Rajah.

When World War Two broke, he was made Secretary of Defence. What happened to him next is unclear but a newspaper report stated that one person by the name G. S. J. Pegler (presumably G. F. J Pegler due to a typographical error) was tasked to lead the Sarawak Rangers to defend against the Japanese invasion.

After Mr Pegler’s death, his daughter, Jennifer got married had a daughter and a son. She died in 1971.

I contacted a relative of the Pegler family. Unfortunately, I did not receive any response from her. It will certainly be interesting to know the live of Mr. Pegler, who once had the luxury of living as Government officer and ended his life as a prisoner of war in the Burma-Thailand railway.