This is an overview of what has happen in the year 2003.

1. Suffered 2 heartbreaks
2. Rejected by Bar schools and eventually had to return to Malaysia
3. The worst financial position that I’ve ever been, my savings of RM10, 000 plunged to RM29
4. My mum crashed her car and days later our house porch collapsed
5. Liquidation of my mother’s business
6. Suffered from depression and suicidal tendencies.

I’m not the only person who suffered such misfortune this year, the human civilization suffered from loads of misfortunes too. For example,
1. The SARS epidemic
2. Iraq War
3. J.W Marriot Bombing in Jakarta
4. Global recession
5. Civil wars in Africa countries
6. Iran earthquake that took more than 30, 000 lives

But on the bright side, I
1. Successfully graduated with a degree
2. Learnt how to cook, eat vegetables and enjoy myself in 16 Watson Road, Sheffield.
3. Been to places that I would never forget
4. Met many friends that I adore, love and never fails to brighten up my day
5. Worked in a great law firm with loads of caring people
6. Learnt Japanese language

I yearn for a better year this time. Welcome 2004!

Maverick’s World Record Attempt has ended with 79 hours. A new official world record has been set.

Khai Fei and I went for Mindy’s birthday party at Bar Sa vanh. She had 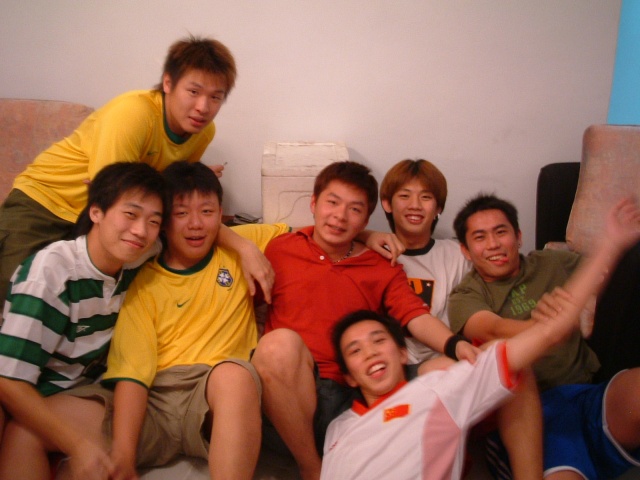 I’m off to Port Dickson for a night trip with my friends. Cya guys tomorrow.

The decks were located on a make shift stage with load of banners of the sponsors around. The amount of vinyl he has was abundant. Thanks to contributions from other DJs.

By the time we reached there, he has already spun for 14 hours. He looks tired but yet he was still dancing to the music. The song he was playing was pretty chill out and there weren’t many people.

The set is documented through video recording. Witnesses are also needed. Anyone can be a witness; so long they stay for the set for 4 hours. On the other hand, non-witnesses can sign the guest book. I saw Jonathan Kent’s (BBC correspondent) name and a lawyer from a prestigious law firm in the guest book

Paramedics are on standby in case anything goes wrong. A portable toilet is next to the stage. And there?s a little hut outside the venue for him to rest.

He’ll be ending his set on Tuesday, 2PM. I wonder if Ahmad Badawi, our Prime Minister would be there to present him a medal or something. Hehe

We asked him what is he going to do once he finishes his set. He said, “I’ll rush home to go online and download all the new songs released during my absence”. A true DJ I tell you.

Here are some pictures I took with Sui Lin’s camera.. 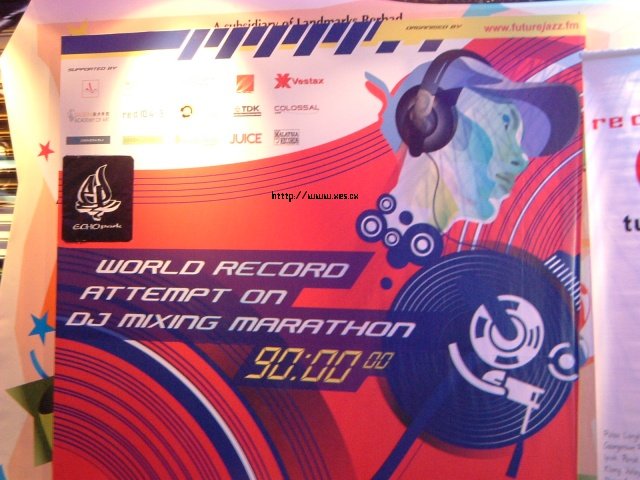 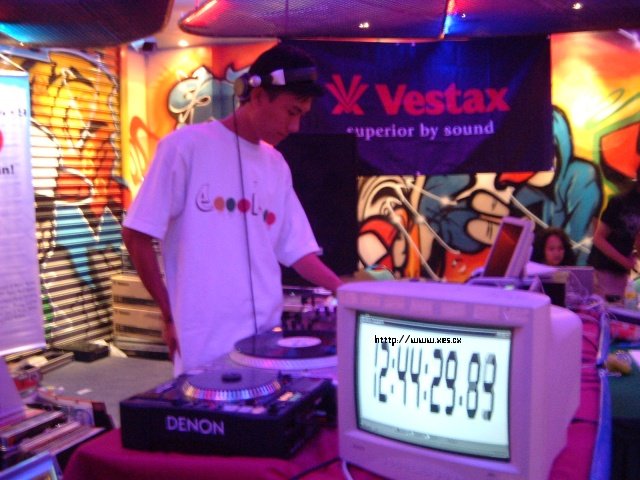 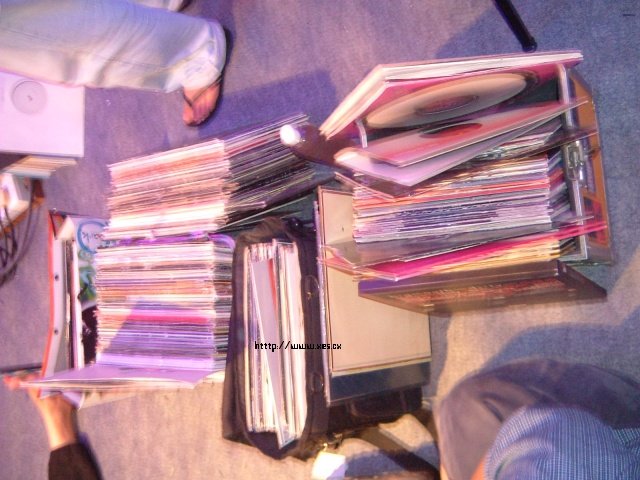 Some of the vinyls he has.. 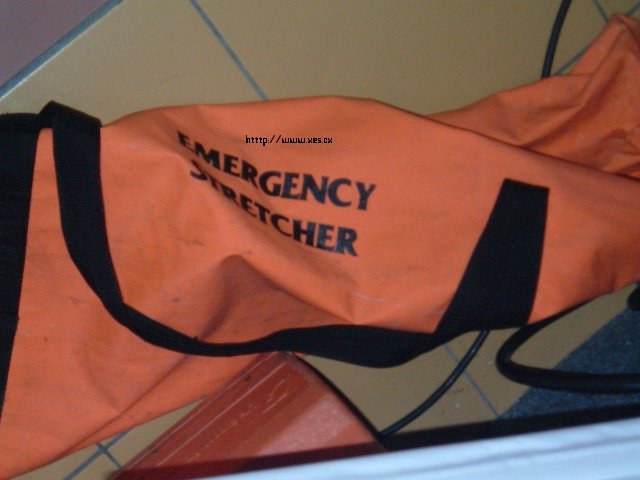 In case anything happens… 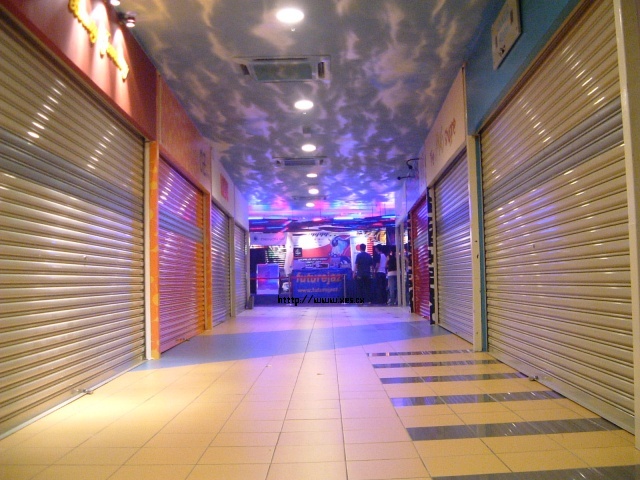 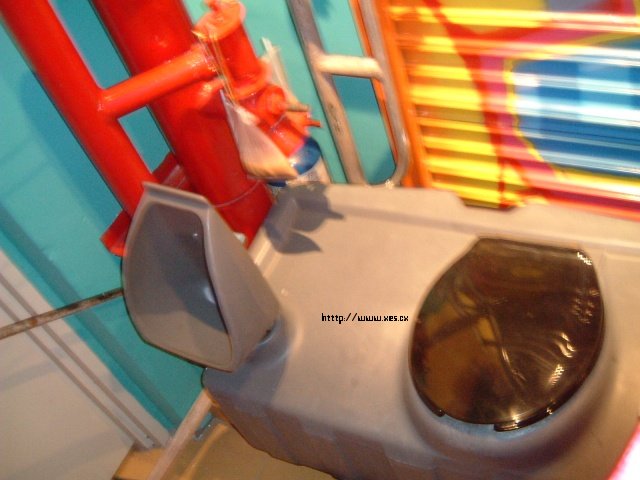 . I headed to Timothy’s house for Xmas dinner last night. The food was absolutely fantastic. Well, it’s a tradition that every year we’ll head down to Timothy’s place for Xmas dinner. I had 4 servings. BURPP. Another great thing about the dinner is that it’s a gathering of my old high school friends. It’s good to see the old faces again.

I rushed over to Cris’s place for his party. Well, the usual blogging and raving gang.

We were in Cris’s room, chilling out, chatting and even dancing. There was once, Ben, Sow, Zing, Ronald (4 big sized guys weighing about 1 ton!) and I sitting and lying on Cris’s queen sized bed. Each of us was sitting on the corner of the bed but an empty space was left in the middle. So Sui Lin decided to move in. As she was about to hit the bed with her butt,

Sui Lin is the fattest girl ever lived.

MERRY XMAS TO ALL MY FELLOW VISITORS!

I received loads of funny text messages last night, here’s one of them..

NOTICE: CHRISTMAS HAS BEEN CANCELLED this year

Someone told Santa that YOU

have been GOOD all year, and…

Yes, that’s what I got when I said I’m not going anywhere for Christmas Eve. I wanted to avoid the crowd, so I ended up in the arcade, yamcha with Khai Fei and sLoonG and watched Infernal Affair 3 bootleg DVD (thank you suilin for spoiling the movie for me, macheepet).

Yeah, I have no life and Christmas is just another day for me…but hey! it’s a pubic holiday!

Uncle Maverick reminds me of a superhero character. In the day time, he’s a coffee shop guy, where he manages a coffeeshop. While during night time, he’s a DJ. And on weekends, he’s a fisherman.

Uncle Mav has this tshirt called “The Happy Fisherman”. It looks something like this 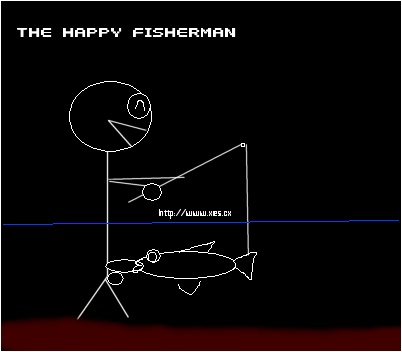 Everyday I used to get about 20 penis enlargement emails, 15 mails on sex deprived house wife yearning for attention, 10 emails about Paris Hilton sex videos, 5 emails about debt reduction emails and sometimes email from a Pastor telling me grandfather stories about how great god is.