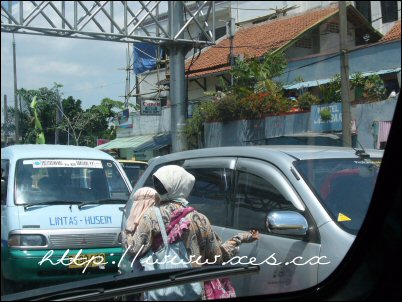 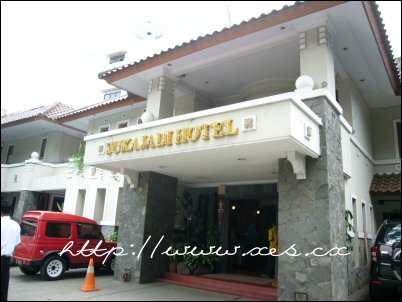 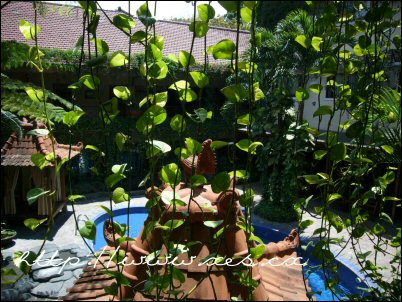 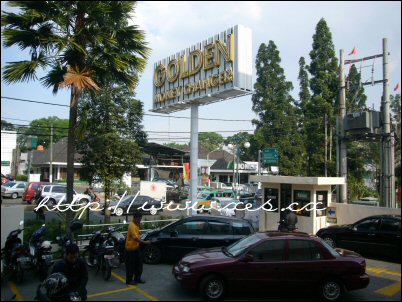 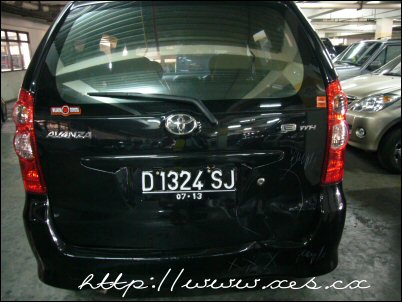 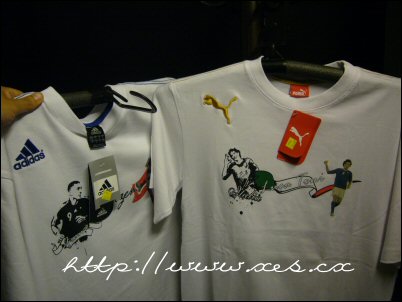 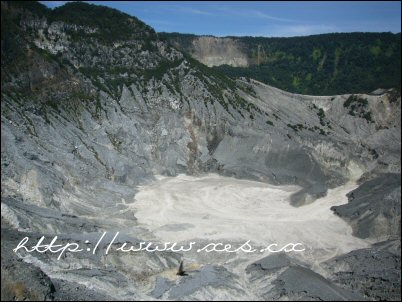 I stumbled upon this article published in Ghana News on 26th September 2008.

Malaysia: Not A Country To Go

My trip to Bandung, Indonesia took off with a rough start. On the eve of my trip, I didn’t have a single rupiah. I was planning to head to the money changer after dinner but I had a little mishap while sipping a hot cup of Chinese tea. I slipped off my hand and the hot tea splashed onto my thighs and.. umm.. It was hot.

I panicked. The nearest money changer would be Mid Valley which is around 10 minutes away. I drove like a mad man to my destination and found that the entrances to the car park blocked…

I was at the verge of dumping my car by the side of the road but fortunately the car park entrance at the Gardens (another annexure of Mid Valley) open.
Within no time, I found myself in Mid Valley changing my money to Rupiah. I’m all set for my new adventure!

I just set up my team for the Tiger FC Fantasy League. Tiger FC Fantasy League is an online football game where you can set up a virtual team and choose your favourite Barclays Premier league players (at a certain price tag) to join your team. It’s like playing Roman Abramovich. The scores are calculated through the real life performance of the players in your team.
Unfortunately, we are only given a 115 million pounds budget to buy players and a manager. Further, we can only have maximum 3 players from a team. Frank wanted choose all his players from Manchester United. Tough luck mate. 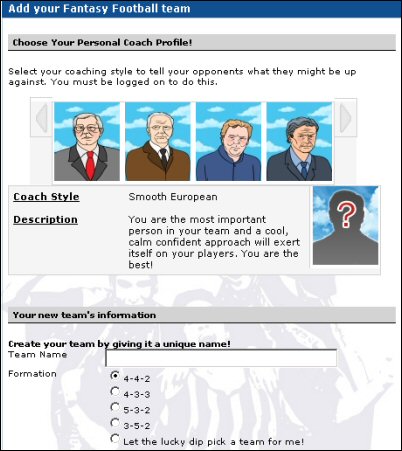 Choose your profile! The third one from the left looks like Steve McLaren. Sure fail.
Since I have a limited budget, it took me some time to choose my players. After choosing all my preferred players, I realized that I ran out of money to buy a manager! Argh!! 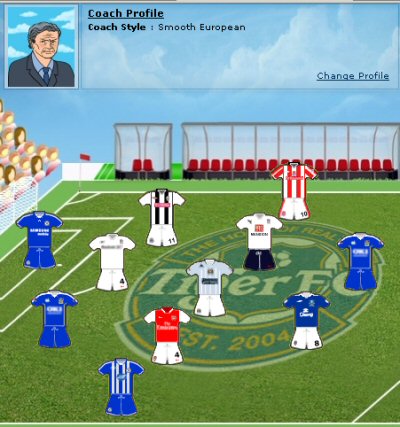 Finally! My team! I wanted Berbatov as my striker initially. I got him out cause he’s too expensive.
After selling off Berbatov, I bought Alex Ferguson as my manager. But after Manchester United lost to Liverfools 2-1..

I’ll be off to Bandung, Indonesia tomorrow for 4 days for a break.

Bandung is one of the largest cities in Indonesia. It is well know for its many universities, textile industry and many roadside cafes. A friend of mine went there recently and bought back this…

My only mean of transport, my 8 years old Proton Satria is aging considerably. It no longer provides me with the cool air from the aircon and it shakes all the time. I guess its time for me to change my car.

I’ve been eying on the Suzuki Swift for quite some time now. The design is sleek and it’s quite affordable. I’ve been checking on the prices of the car on www.mudah.com.my, an online buy and sell portal which I just discovered. You can actually post your stuff online for free. 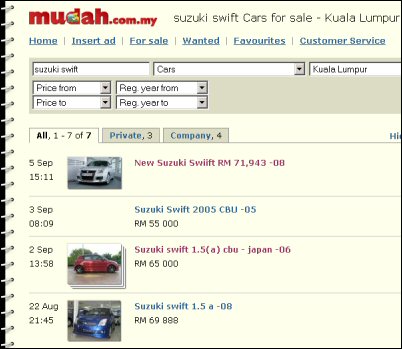 On the other hand, I don’t want to spend my hard earned cash on a car. It’s going to be a liability. My other alternative is to save up enough to buy a piece of property. It’s forced savings and if I’m lucky, I’ll get a tenant to cover up my monthly payment. I was surfing Mudah.com.my’s property listing and I note that it listed properties all over Malaysia – even Sabah. Mmm…maybe I should buy a retirement home there.

But warao, houses in Kota Kinabalu are not cheap!

Since Mudah.com.my is quite informative, I surfed the website for more stuff. And I found this..

SOMEONE PIMPED HIS DOG ONLINE!!

Uncle Shuffler Sow has decided to leave everything behind to seek his fortunes in London. He will be sorely missed by many including myself.

This year, Sow the plastic bag man will not be in service for my birthday. 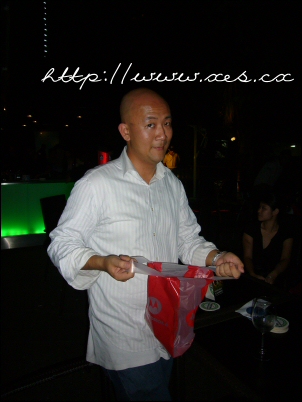 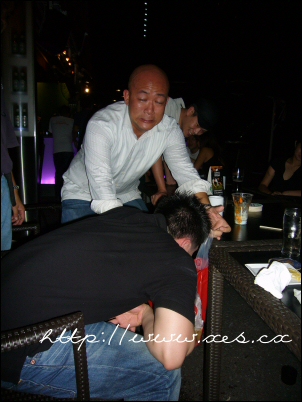 All the best bro, may you steal a lot of water and suck a lot of oil in London!

One of the problems faced by bloggers is “internet trolls” i.e. a person who posts malicious, annoying, insulting or degrading message anonymously. For many years, this website has been subjected by assaults by internet trolls, for example, crazy woman iloveu .

And today, Malaysian blogosphere has taken another step in combating internet trolls. The latest news is that Cheese@Ringo has publicly revealed and humiliated an internet troll!! AAHHH I CAN TASTE THE SWEET REVENGE…mm 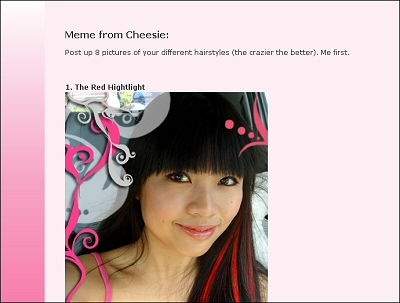 Unfortunately, the post has been amended and all references on the troll has been removed. The post was removed after the ‘troll’ publicly apologized. Boohoo.

Perhaps it may be useful to reveal that message posted by internet trolls may give rise to an offence under the Malaysian Communications and Multimedia Act 1998. Section 233 of the Act provides that:

233. Improper use of network facilities or network service, etc.
(1) A person who-
(a) by means of any network facilities or network service or applications service knowingly-
(ii) initiates the transmission of,
any comment, request, suggestion or other communication which is obscene, indecent, false, menacing or offensive in character with intent to annoy, abuse, threaten or harass another person; or
(b) initiates a communication using any applications service, whether continuously, repeatedly or otherwise, during which communication may or may not ensue, with or without disclosing his identity and with intent to annoy, abuse, threaten or harass any person at any number or electronic address,
commits an offence.
(2) ….
(3) A person who commits an offence under this section shall, on conviction, be liable to a fine not exceeding fifty thousand ringgit or to imprisonment for a term not exceeding one year or to both and shall also be liable to a further fine of one thousand ringgit for every day during which the offence is continued after conviction.

This section of the act has been used before in Malaysia. Opposition party member, Tian Chua was investigated under this section after he posted certain images on his blog.

/me waits for the first Malaysian internet troll to be charged in Court.

While many of us had the comfort of celebrating the Mid Autumn Festival at their homes, the Member of Parliament for area, Teresa Kok is locked up at an unknown place. She was arrested under the Malaysian Internal Security Act which allows a person to be detained for an indefinite period.
According to media reports, Teresa was accused of stirring up racial sentiments by instigating residents to petition against mosques in Kinrara and Kota Damansara to lower the volume of their speakers. Teresa has denied these allegations and both mosques have come out to deny these accusations.

My area is relatively calm and so far I’ve not seen any street protest in my area.
Whatever is it, I hope that Teresa Kok will be released soon.