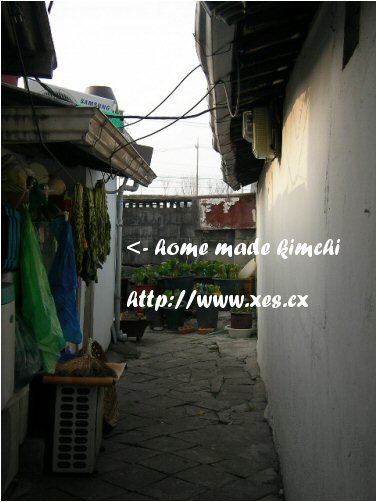 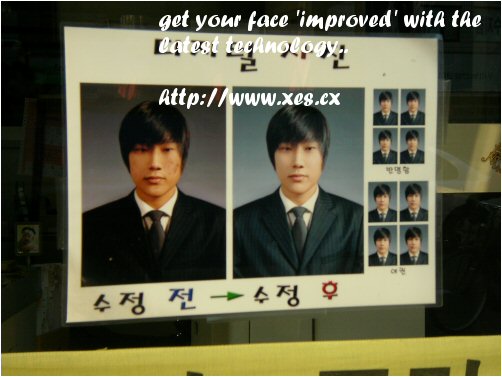 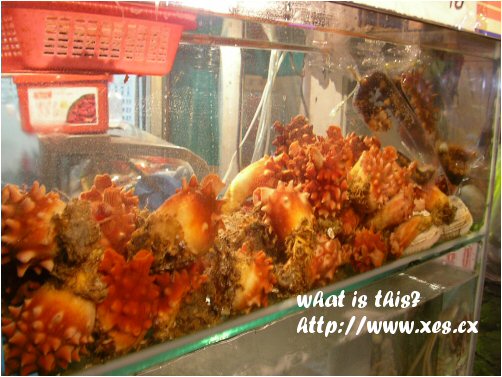 From Gapyong, we took a taxi to the Nami Island Jetty. Nami Island is where mmmm Yong Jun and Ji Wu rode a bicycle and kissed all those mushy stuff. I don’t watch Winter Sonata by the way, Jane watched it.

Unfortunately, since its autumn, the sun sets by 5PM. We wandered around the island in the dark but thank god few parts of it were lighted! The weather was freezing as well. We had to get ourselves bottled warm drinks to warm our fingers. 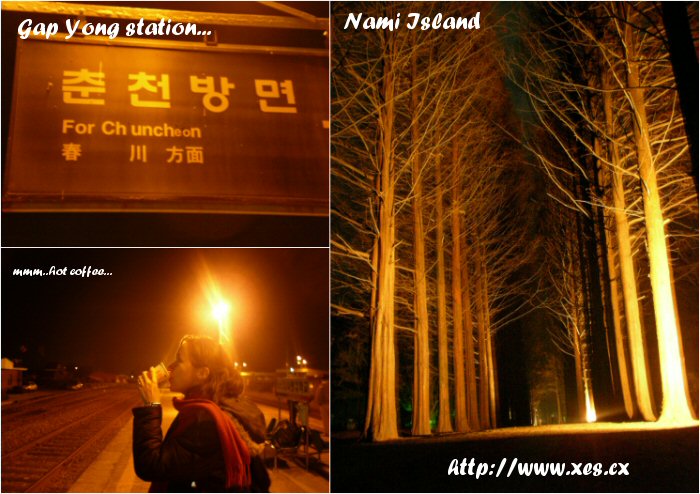 This time round, we managed to get to Cheongnyanyi in time. I got myself the latest Christmas Stamp issue at the Post Office there. w00t! While waiting for Jane to make a phone call, an old man pushing a cart of bananas was shouting loudly in Korean. Jane and I had no idea what he was doing. It sounded like he was trying to sell his bananas but in an angry tone. Maybe gone crazy due to the Korean War.

Chuncheong is the place where the famous Korean Drama, Winter Sonata was shot. It is also very popular in Japan. I heard many Japanese obasans (aunties) were injured after trying to catch a glimpse of the main actor, Bai Yong Jun when he visited Japan.
Yong Jun’s face is everywhere. I see his face more than the President’s face. Japanese obasans were everywhere as well.

There is a Winter Sonata tour as well. One can hire tour guides to bring you around . Jane and I decided to go on our own. Unfortunately, it didn’t turn out well. We got lost and even missed our train! We only managed to visit the part where Yong Jun and Choi Ji Wu first met. There were couple of souvenir stalls selling Bai Yong Jun merchandise and a Yong Jun mannequin.

We wanted to go to Chongdo Island (also where Winter Sonata was shot). We couldn’t find the jetty though. We ended up abandoning that plan and also missing our train to Gapyong.

Since we had to wait for an hour for the next train, I decided to commit a crime. I stole a stamp from an abandon post box. Hehe 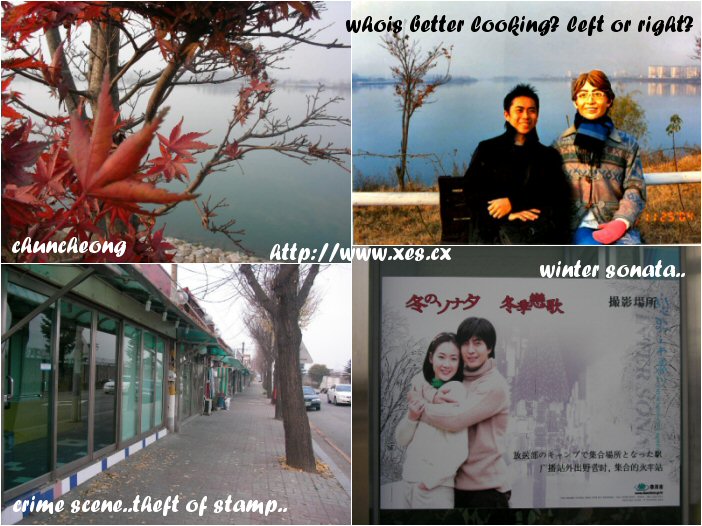 We had dinner at Dongdaemun. Initially we didn’t know where to eat but after passing a Korean restaurant with Japanese words, we decided to eat there.

Dongdaemun is a must when visiting Seoul. It consists of endless roads of shops and markets. For sports wear, head to the Dongdaemun station. Be prepared to bargain.

Souvenirs are abundant there as well. I bought couple of Gundam keychains 😀

After a long walk, we rested at a café. The café had a funny looking cake. It looked like spaghetti cake. 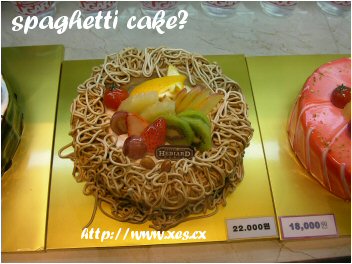 Another thing to take note in Seoul is the shopping centres. Sometimes they would hold a performance or ask some of their customers to perform on stage. The one we saw was a dancing competition. It was really amusing as a weird looking schoolgirl did a sexy dance on stage. Unfortunately, she didn’t win the competition.

She danced too much till the hostess had to pull her away. Then during the finals (she was eliminated in the semi finals), she gatecrashed the stage and danced. She got kicked out of course. 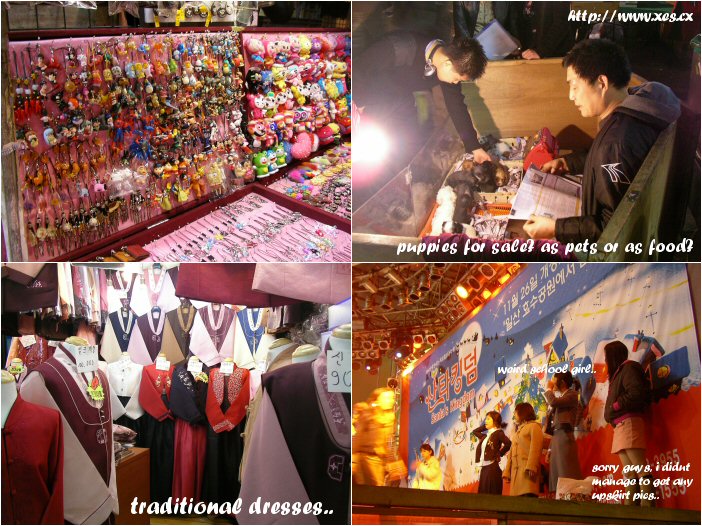 We woke up late, very late. We couldn’t make it in time for Chuncheong.

While walking around Cheongnyanyi, we sat a group of ladies preparing kimchi in front of Lotte Shopping Centre. They were stuffing some red coloured paste into the cabbages and a man was announcing something. Sounds like they were trying to break the world record.. 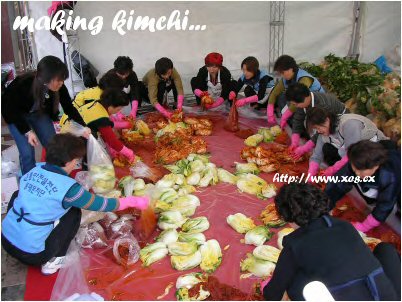 With the huge amount of spare time, we ate some sort of grilled octopus with vegetables for lunch at a home like styled restaurant. Jane was fascinated with the huge scissors the lady used to cut the meat. The scissor was as big as her face!

We then spent the entire day reading map and writing post cards. We bought a pack of postcards with 12 postcards in it from the palace souvenir shop.

We were lucky to witness the guards changing ceremony. Actors dressed in traditional clothing with weapons would give a great performance. However, it was just a procedure, no kungfu or fighting action can be seen.

Jane wanted to try the traditional costumes provided by a shop. Unfortunately, it wasn’t open.

When visiting Gyeongbukgong Palace, one must see Gyeonghoeru. Official banquets were held and foreign envoys were once entertained there. The small pavilion is built next to a pond hence one can see the reflection of the pavilion on the pond. 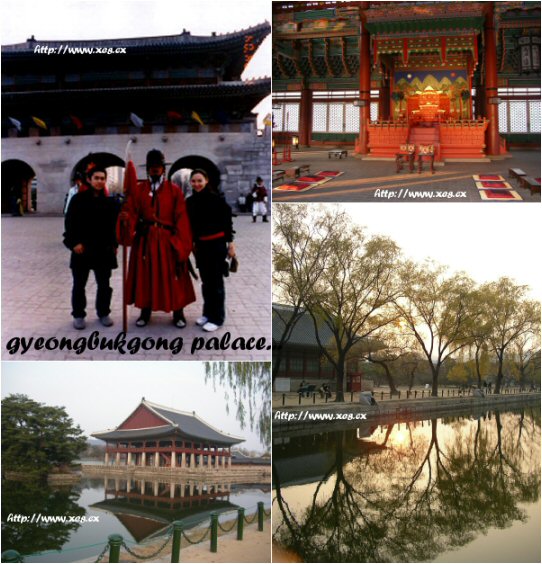 The sun was setting when we finished exploring Nandaemun. Seoul Tower, which is located on top of Nam San, was our next destination. One can opt to take the cable car or walk up to the tower. We took the cable car, as we were tired from walking the entire day.

We could get a picturesque view from the cable car and from the top of the mountain. However, we decided to enter Seoul Tower for a better view. There is an entrance fee for it, student price available but only applies to University students or below (post graduates not included! God damn!)

It was a foggy day. I was bloody frustrated with that. If it were not for the fog, we could see the mountains, which surround Seoul. 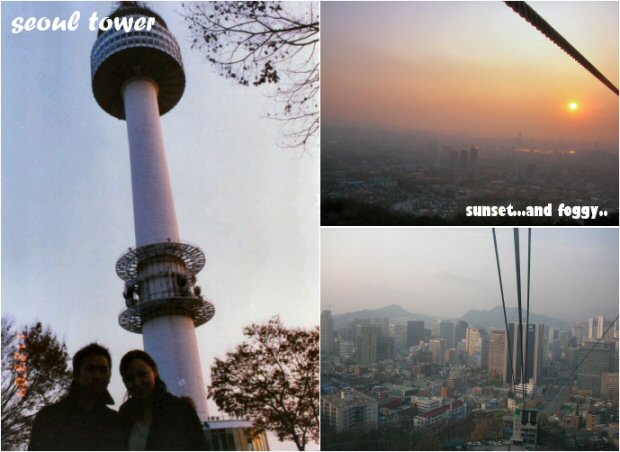 I was advised to wait till night time. We waited and it paid off. The night view of Seoul was excellent. A tripod would be great while talking pictures. However, beware of the reflection due to the glass panel. 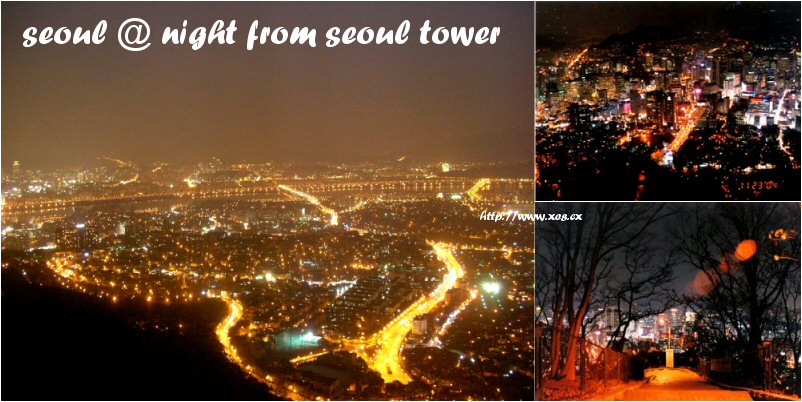 Jane and I were laughing at a lady who works in the elevator of the tower. Her job was pressing buttons, look pretty and translate some stuff. Gee..what a boring job.

We had bibinba at the restaurant next to the cable car station at the foothill. It didn’t taste good as it consist only vegetables and rice! However, according to Jane, in Tokyo, they serve meat in bibinbas. 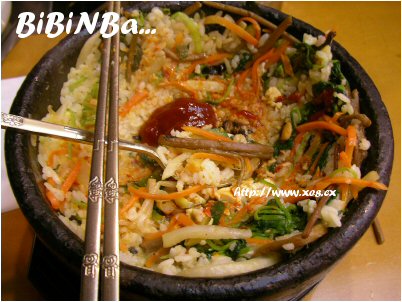 We walked around Myeong Dong before heading to Yeouinaru. Yeouinaru Station leads to the riverbanks of Han River. It’s also a lover’s spot and a lovely place to spend the night with your love one. 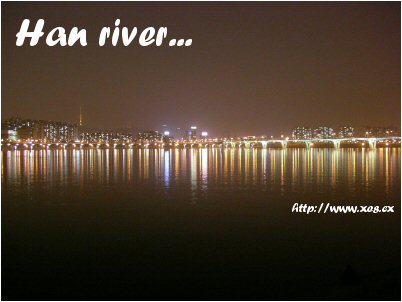 Myeongdong was our first destination of the day. Myeong-dong, also known as the Fashion Street, consist of hundreds of fashion malls, shoe shop, sporting goods and so on. They even have an underground shopping area. One can expect stamp shops there 😀

However, we didn’t do many things there. We had breakfast, great stuff. 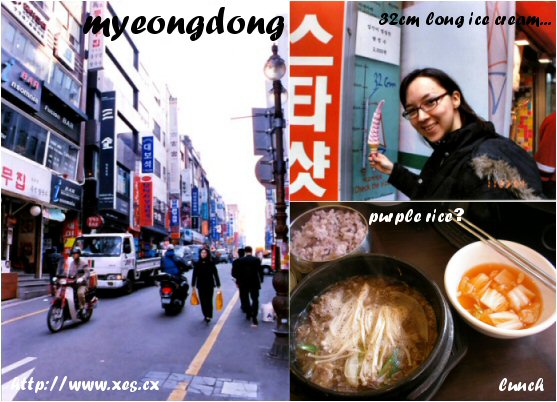 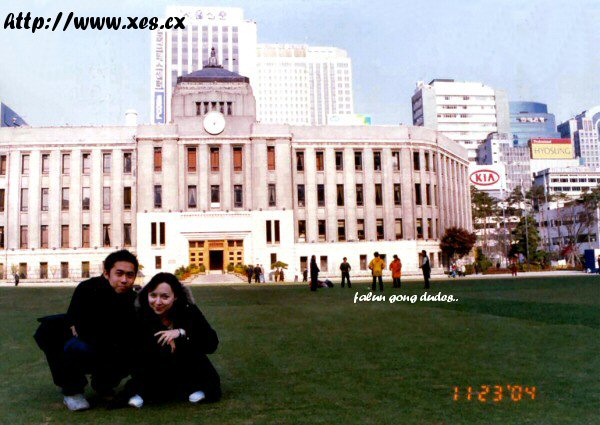 Since Gyeokbukgong Palace is closed every Tuesday, we went to Deoksugong palace, which is just next to the city hall. We have to pay a small entrance fee into the palace, students get discount.

The view of red leaves and arches were beautiful. However, we were not allowed to enter into the buildings. The only building admissible was the museum which is located next to the palace. The museum was boring though. The signboards were not translated into English hence we had no idea what the fark they were saying.

However, there is a little souvenir shop in the museum with great selection of gifts. Price is reasonable as well. 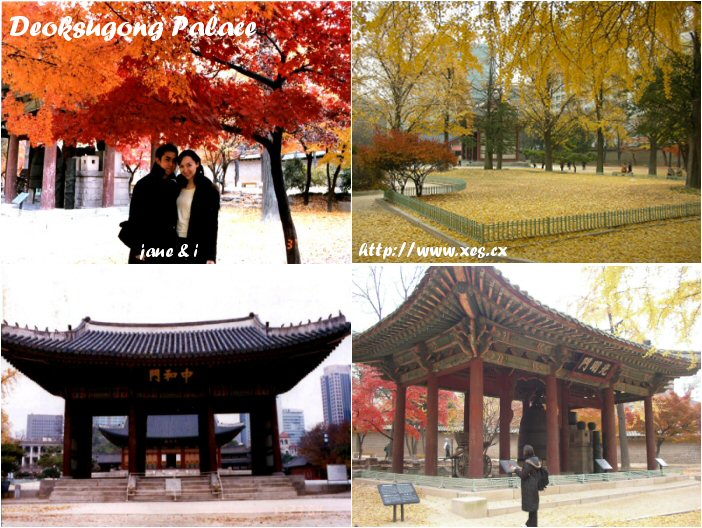 After Deoksugong Palace, we went to Nandaemun market, which is within walking distance from the palace. Nandaemun market is another huge market area with counterfeit clothes, food and many other accessories. Sights of beggars were common as well. They were pretty hardcore. I saw 2 dudes crawling on the floor pushing a music player with his head!

According to Jane, many Japanese get their glasses done in Korea. So many till opticians had to learn Japanese to cater the huge market! Jane had hers done for 4000won and it only took 20 minutes!
To be continued….

The 6 and a half hour flight was lousy. Bloody Airbus doesn’t have personalized screens for passengers and the lady who sat next to me had bad breath. However, I had one of the best seats, which were seats with no seats in front!

For most countries, no entry visa is required for stay less than 90 days. I got through the immigration and custom easily.

Since Jane was due to arrive 8 hours later, I decided to leave my bags at Brown Hotel first. Bus would be the most appropriate way to travel to Seoul. It costs 7000won and takes about an hour plus.

I had problem looking for the hotel initially. I had no map and no guide. I didn’t bothered to ask around as Koreans couldn’t speak English. My only guess was that the hotel is located near Shinseouldong station and Bomun station.

After wandering around for half an hour, I accidentally found it! The hotel allowed me to check in few hours earlier than the official check in time. The hotel room was small though but enough to accommodate the two of us and the plus side is that the floor is heated!

We had dinner at the restaurant next door. Jane read good reviews about it hence we decided to try it. Oh my god, it was so good. Service was absolutely great as well. The lady showered us with loads of attention and taught us the proper way to eat Korean food. 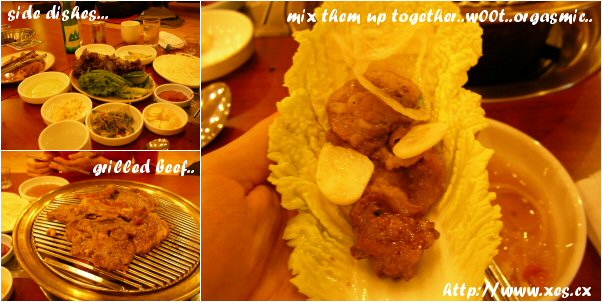 We retired early, with great amount of excitement over the events which were installed for us tomorrow 😀 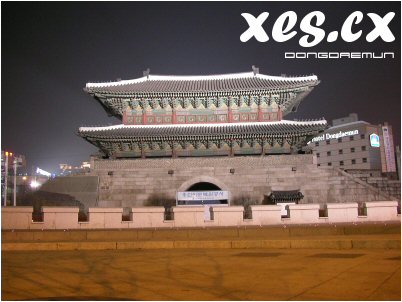 No words can describe how good South Korea was. I guess it was due to the company I had.

The weather was cold. About single digit Celsius everyday.

Fortunately, it didn’t rain till the last day of my trip.

Getting around South Korea was easy like ABC. Subway is the best way to get around, it cost about 900won for every trip. Every signboard has English translation but most South Koreans cant speak English. Unfortunately, signboard on bus stands sometimes doesn’t have translation for it.

One big thing in South Korea are the power of Chaebo, family dominated conglomerates such as Samsung and Hyundai. They even have apartments with their name on them! 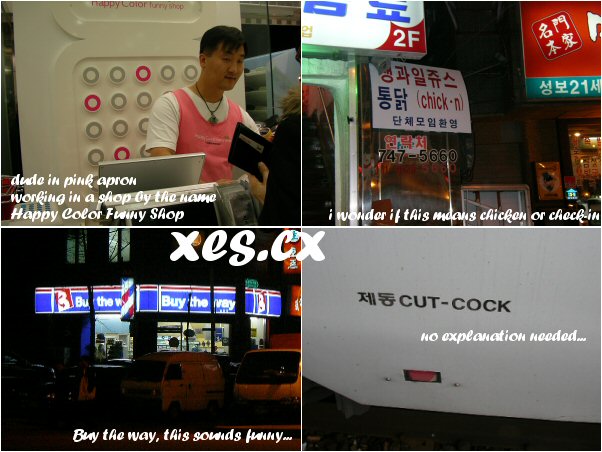 As for the Korean people, I find that more South Koreans could speak Japanese than English. Even staff at an Optical Centre could speak Japanese! Further, they treat tourists very well especially in Korean restaurants. They would personally teach us the way to eat their food. However, occasionally I feel like punching them on the face when I’m walking on the streets. They push and shove without discrimination! 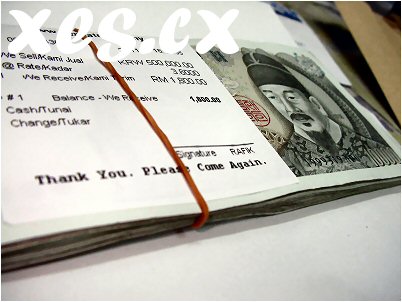