I almost missed the bus to London this morning. I waited 10 minutes for a non-existing bus to the train station and only realise it when there is only 20 minutes left before departure. I rushed to the main road and search for a taxi but there was not even one on the street. Panicking and desperate, I called a taxi. Few seconds after I put down my phone a taxi came. The taxi driver sped all the way to the train station as soon as I told him that my train is leaving in 10 minutes.

Fortunately, I got there on time just few minutes before departure. The trip to London needed me to take a bus to Derby’s train station. It only took me an hour and it seems shorter cause I dozed off few times on the bus. The train to London took about 2 hours. I arrived in London St Pancres safely. 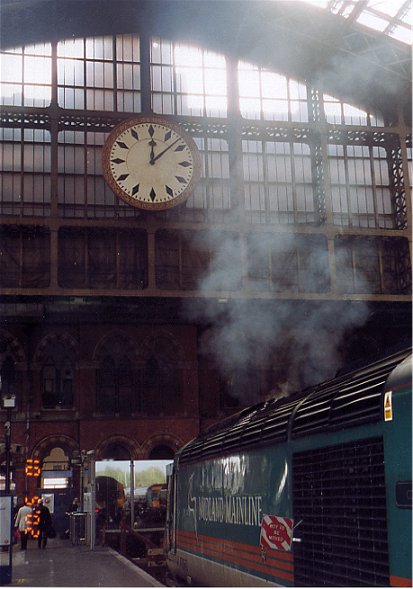 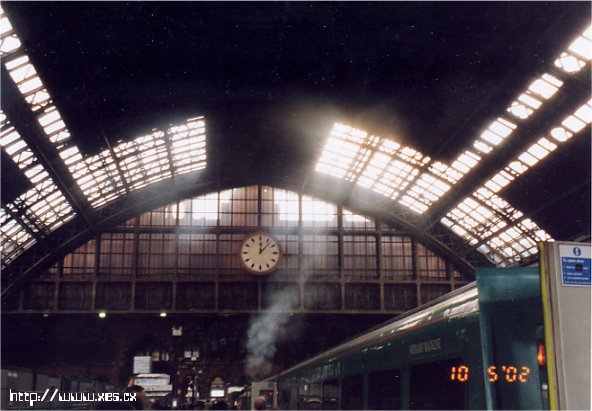 London Underground reminds me of Melbourne’s train system. People rushing, high-speed escalators and the gushing wind caused by the train on its arrival. The trains here look pretty good. It has seats with comfy sofas and it’s much smaller. The train takes an average of 1 minute to its next station.

I was early by 1 1/2 hour. I wandered around, took some pictures and even had the time to take a look at the toilet. I needed to pee badly and searched for the toilet. A payment of 20p is required in order to active the bar that blocks the entrance to the toilet. As I got out from the toilet, I was famished. Auntie Anne’s Pretzels was literally calling my name. I stopped myself from buying it (2 for one) so that I wouldn’t spoil my appetite for lunch later.

Claudine arrived on time, exactly on 1:30pm. I passed her the carton of cigarettes she wanted and she introduced her English boyfriend, John and her friend, Gan (Malaysian). She was pretty adamant on asking me to join them for lunch. I told them I would call them as Gin Yew arrives. 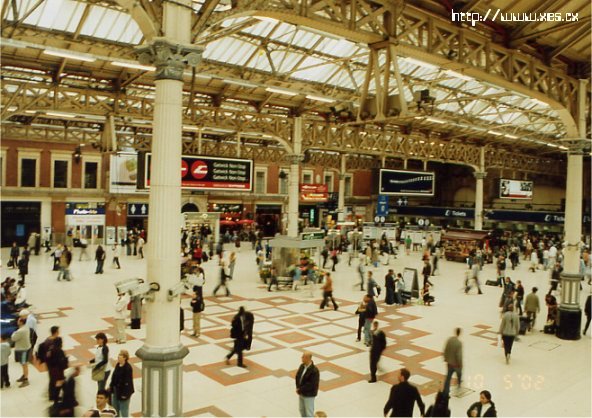 Gin yew was 20 minutes late. I passed him the credit card that his parents passed to me. However, it was crooked probably because I put it on my back pocket for too long. Hopefully it still works.

We headed to Leicester Square next. We arrived totally no idea where we were and walked around searching for Chinatown. Fortunately, we found it within minutes. All we did was just walk straight after we got out from the tube.

London’s Chinatown is huge and much different. Most of the shops there are Chinese restaurants and even the arch is much different from others. Gin Yew and I were supposed to meet up with Claudine and her friends for lunch at Four Season restaurant. According to her, it serves the best Duck rice in town. Gin Yew and I searched the whole Chinatown for that restaurant. Claudine said that it’s opposite Pizza Hut. It seems that the restaurant is on the other side of Leicester Square. Frustrated and tired, we settled down in Crispy duck restaurant instead.

We ordered a set lunch (fried squid, sweet and sour ribs and fish) and added half a duck in that 3 stories high restaurant. We ate and chatted for an hour. Gin Yew is currently studying Engineering in Portsmouth Uni. He was supposed to get into 2 year but apparently the uni rejected his foundation he did in Malaysia because the uni claims that it wasn’t strong enough. Barely 2 weeks of staying in Portsmouth, he already made plenty of friends. He is staying with 5 other Caucasian in his Uni’s flat and as usual all of them drinks alcohol everyday. 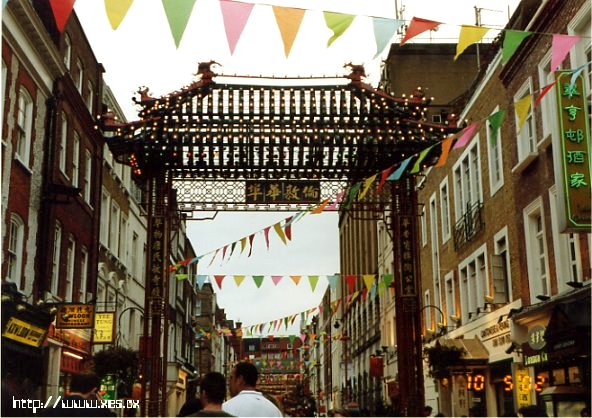 Initially, we had no plans at all. No idea where to go. I looked at the map and suggest that we go to Westminster, where the Parliament is. We took a tube and as soon as we got out from the station, we were astonished. We didn’t know the Great Ben and the Eye of London (Ferris wheel) were located in Westminster. Never once in our life that we though of being in London, looking at the great Architecture of Englishmen together.

He hurried onto the bridge that crosses the River Thames and started snapping pictures. Across the bridge, lays the London aquarium and the Eye of London. We vowed visit them one day. 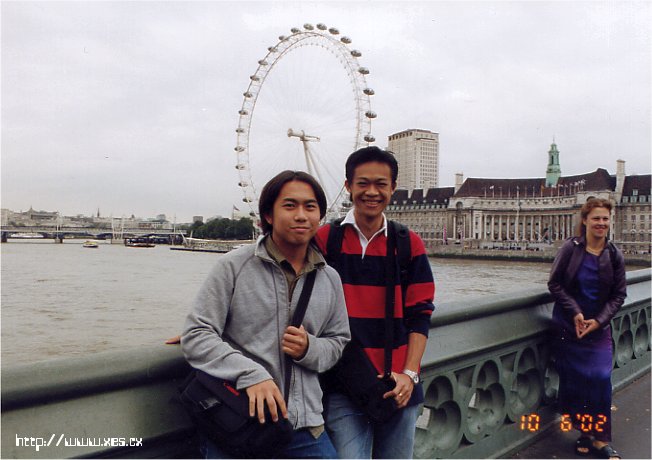 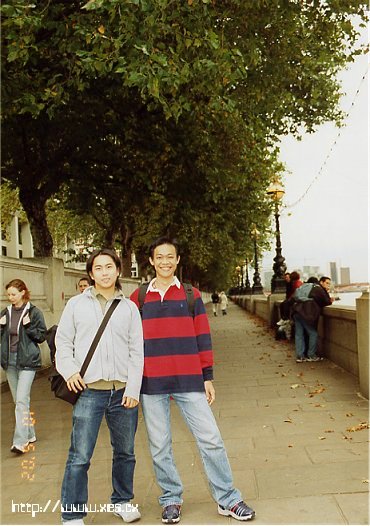 Side Walk of River Thames 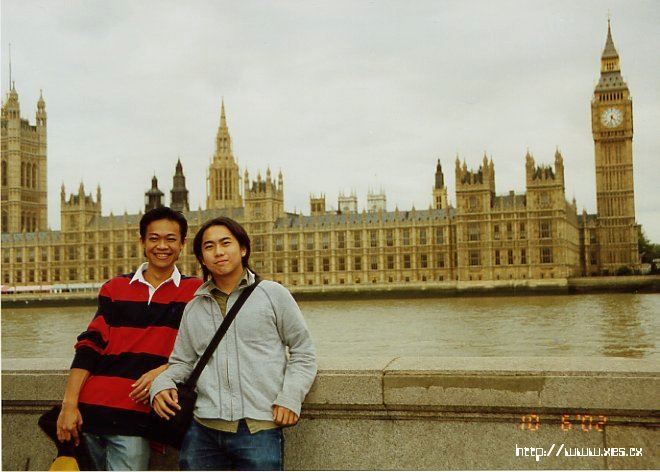 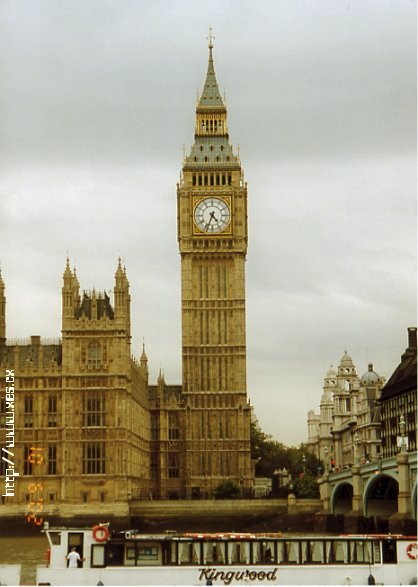 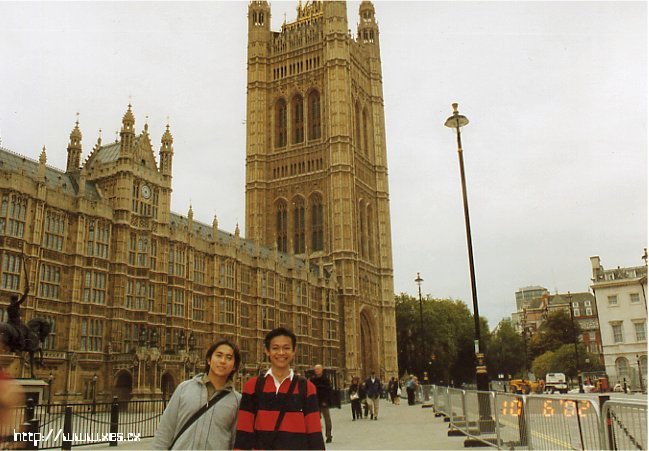 Buckingham Palace was our next target. According to the steel engraved maps located on the streets, the palace is somewhere nearby. However, the map wasn’t very clear and we wandered around for quite some time until we asked a policeman for direction.

‘Excuse me, where is the Buckingham palace?’
The policeman turned and gave me a big smile ‘Just go straight and turn left, you’ll see a big arch on your way and then go straight’
It was the first time a policeman gave me a sincere smile. Back in Malaysia, the policeman only smiles when say, “Datuk..boleh tolong aa?? (Datuk, can you help me???)”

We had to walk though a huge and long avenue as we passed the huge arch. The road was paved in red probably to symbolise a red carpet. Buckingham palace was a disappointment. I was expecting some palace guards dressed in the Red Coat to be standing in front of the gates. There wasn’t even one on the entrance.

Gin yew and I were very much tired by then. We barely rested and walked non-stop. However, it did not dampen our intensive and compact London tour. We headed straight to the London Bridge.

It was sunset when we arrived at Tower Bridge thus it gave me great photos opt. We took couple of pictures, headed back to the tube and rushed back home. 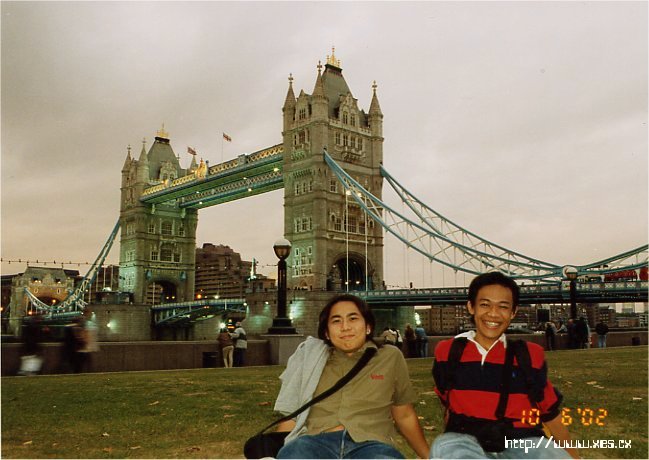 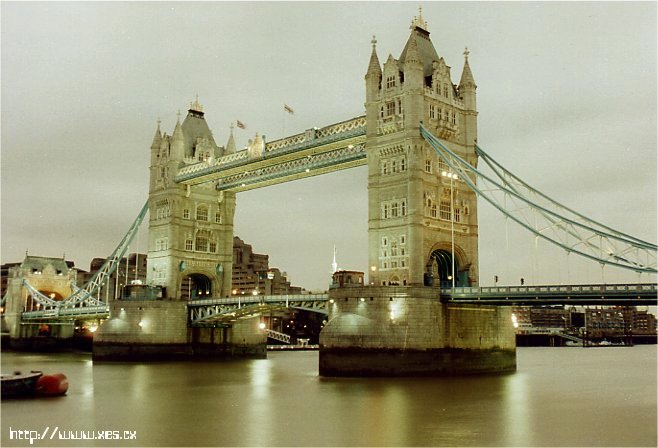 I almost missed my train again. I ran as soon as I got out from the tube and made it just in time for the train. Damn, my time management is really bad.

The train took me 2 hours again. I had to stop at Derby to take a bus back to Sheffield. The bus ride was unpleasant. Even though the bus was amazing stuffy and hot, the driver turned on the heater.
I arrived in Sheffield exhausted. I bought McDonalds for dinner and headed straight back home. Despite the lovely sceneries and clean streets. London is polluted. I cleaned my nose when I got back from London and found that all the substance was black.

I complained to my housemates that the Buckingham Palace guards weren’t around. Frederick told me that the guards would only appear during ceremonies!
– 12:56PM