My firm had a 3 days 2 nights company trip to Club Med Cherating. It was great. 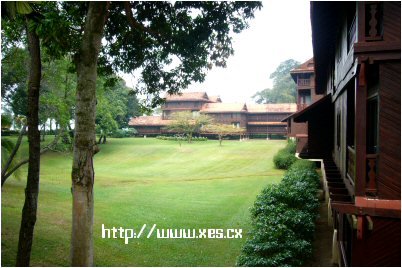 I was drunk for 2 nights. Uhh.. now my brain feels so dehydrated.
Company trip is one essential event for all companies. It is the time where the low ranking employees meet the top bosses and also the time where everyone is equal regardless of position in the company. One of the ultimate aims of company trip is to instil an ‘attachment’ to the company. This attachment would also strengthen the bond between the employees.
Our firm hired around 7 busses to transport 250 over people to Club Med Cherating. 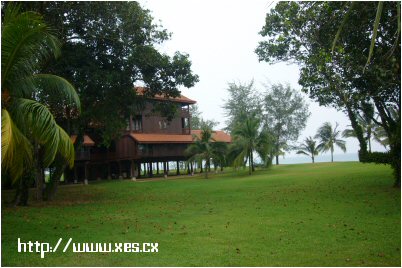 Club Med Cherating is located in the North East of Malaysia in the State of Terengganu, about 5 hours away from Kuala Lumpur. As many may know, Cherating is well known for their beaches.
The service at Club Med was excellent. They had some sort of PR staffs consisting of fit and attractive young men and women from all around the world. They would guide us in the games and activities (e.g. archery, rock climbing, golf, yoga, sailing, roller blading and trapeze) provided by Club Med. And during meal times, they would join us to chat with us. I have colleagues going goo-goo-ga-ga over many of the good looking staffs there. 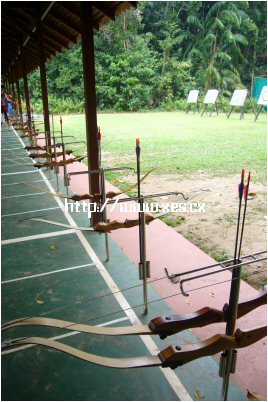 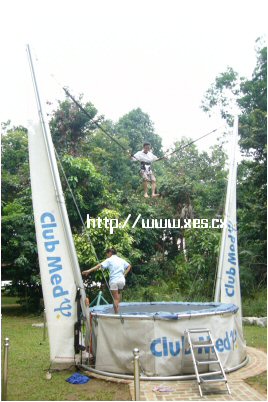 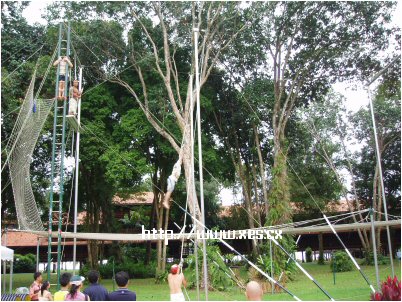 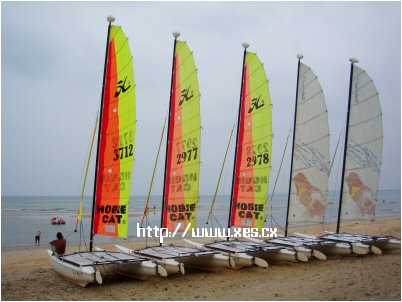 Other than the PR staff, one Club Med waiter created a good impression on the honesty of their staff. I lost my handphone at the bar. After realising that my phone went missing, I searched frantically for it and one waiter immediately brought me to the reception. My phone was there! It was later revealed that it was the said waiter who found the handphone and passed it to the reception. If this were to happen in a club in KL, I would probably have to fork out my hard earned cash for another handphone.
As for the food, we were provided with a variety of food consisting of Chinese, Italian, local and Western food. They also have a huge section for dessert consisting of a vast variety of sinful fattening dessert and also healthy fruits and salad.
During the day, our activities consist of many sport activities (as mentioned above). On our second day, Club Med organized a series of games for us. As usual, we had our inter office teams competition.
In one game, the MC was about to announce the winner of a particular game, suddenly he blurted out, “Warriors!” (Team name). The Warrior team celebrated like mad, screaming and clapping loudly. FYI, the team Warrior is one of the weakest teams in the firm and winning a game is an eventful occasion. However, after the Warriors celebrated their win, the MC then said, “you guys actually got 4th place (last place)”. @_@|||
And during night time, there would be performances by the staff. Quite entertaining. And after the performances, we would hit the bar. 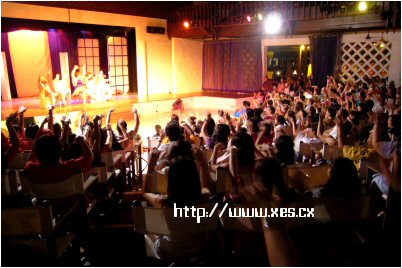 Our first night was pretty crazy. We started off during dinner as beer and wine were bottomless.
By the end of the night, everyone was drunk. I had mixture of beer, vodka, wine and champagne. I woke up with a mild hangover. However, on the second night, many of my colleagues didn’t drink as many were suffering from after effects of heavy alcohol consumption on the night before. Notwithstanding that, the bosses treated us drinks. I think the bosses bought us at least 40 glasses of beer. 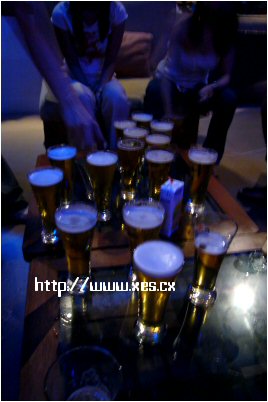 We were scheduled to leave around 11AM on Sunday. After heavy rounds of drinking on the night before, my room mate and I woke up at 10:30AM, missing breakfast! Fortunately, we managed to get on the bus on time.
Unlike other firms that had the opportunity to travel out from the country for their company trip, I find that our trip to Club Med was well worth it. It was definitely an ice breaker for many of us.