During my days at Tapton Hall (which was last year), my British corridor mates have a weird bathing schedule. One of them bathes once a week and drowns himself with perfume the whole week. The other one is better, he baths quite often but the only problem is, his bath last only 5 minutes. I wonder what did he wash and what he did not wash.

Congrations to Ben aka tiberianx for his graduation from Monash Uni. 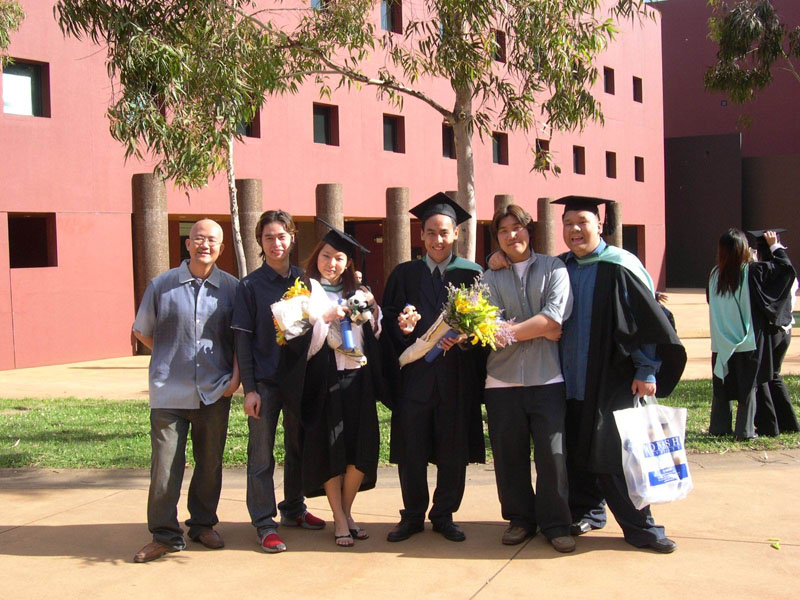 5 more days from Malaysia!
However, I’ll be having a tough week next week. I have to prepare Monday and Tuesday’s tutorials and also study for Wednesday’s Japanese Oral and Listening exams. Despite the heavy workload, I spent the whole day lazing at home. Damn.
– 11:49PM

My seminars were good today. I managed scramble through the seminars without being questioned. Ken Lidstone, our Criminal Evidence tutor, was pretty pissed with the class today due to the fact that out of 20 people in the class, only 3 people voluntarily answered his questions.

Tom, our ex treasurer of the Clubbing Society and also an English friend of mine from Sheffield University, found a new job in Kuala Lumpur. He’s working under Klue magazine now. According to him

“I’ve now got a new job though..I’m working for a magazine called KLue…have u heard of this mag? I’m working on the nightlife section of the magazine…so i get to go clubbing for free, get free drinks, and then all i have to do is write a review on the club! It’s wikid!!!!! And I get to meet loads of top DJ’s too…I met Paul Van Dyk last Wednesday when he came to Emporium…and I’m meeting Sasha in a couple of weeks!!! =)”.
Lucky bastard. He’s having a time of his life in Malaysia!

I just found out that Tom’s surname is Laycock. Gee, laugh all you want, man. Malaysians just love to make fun of people’s name. hehe 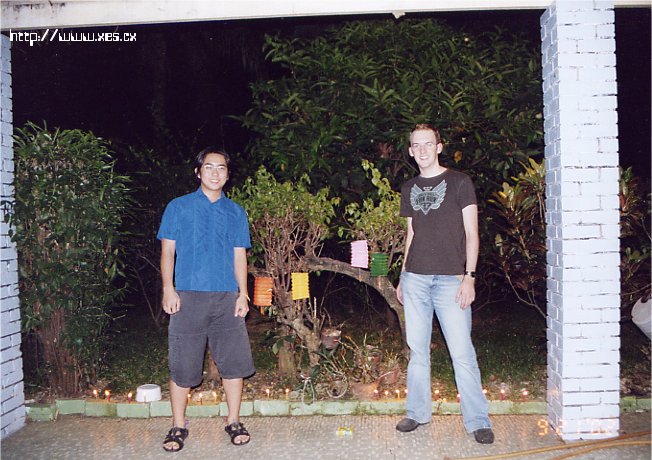 I’m down with flu. My nose is blocked. I felt dizzy throughout the day. But yet, it did not stop me from attending my Muay Thai training today. The training made me felt better for a while but it lasted for just an hour. I need loads of rest. Body cant take so much shit.

I’m so stressed. I have 2 seminars to for tomorrow and obviously I’ve not done anything yet. The reading materials run for pages and pages and I haven’t finish reading them yet! aaarggghh…I cant wait…7 more days from home, yippee!!
– 10:00PM
KENT CHOICE: Blast. 28 Dec 2002
I wanna go I wanna go I’m going for sure!
– 6:00PM

Another cold, cold day. The temperature finally hits 0 degree Celsius. I could see ice on the streets this morning and even the Astro pitch was frozen white. Cars were covered with frost. And according to the weather report, it might snow tomorrow. Snow, let it snow!

Ok, 8 more days and I’ll be back in Malaysia. I wanna club club club!!

It’s Samantha?s 21st birthday today. As usual, we had birthday dinner at Mei’s Chinese restaurant. It was good. 20 people turned up.

I had a mild hangover this morning. No idea why, I wasn?t seriously pissed last night. Darn, it was giving me a headache whole day. I couldn?t study at all.

Cold, cold weather. Absolutely chilling. According to the weather forecast, it?s about 2 degrees Celsius but it sure feels like ?4 degrees Celsius. Most people on the streets wore beanies and gloves. I myself had to wear 2 layers of clothing and a beanie.

Despite the cold weather, it didn?t stop a small group of people protesting outside Firth Court. They lighted up a lot of candles around them, held banners saying ?Animal have rights too? and ?Sheffield University Animal Laboratory?. They were handing out flyers with ugly pictures of mutated animals.
– 11:00PM

uh oh, I’m having a sore throat. I just came back from the Sheffield University Muay Thai Society’s Christmas dinner. We rounded up 36 people to dine at BB’s, an Italian restaurant and booked the VIP room with 3 long tables and 30 bottles of wine. I sat around Avin, Fiona, Rich and Andy. Basically I spent the whole night talking to Avin due to the fact that we have a lot of mutual friends. Fiona was busy hitting on Simon (: x hope Scotty doesn’t say anything about this to Fiona, hehe).

The food wasn’t good. My Funghi pizza was too salty.

By the end of the night, I finished ½ of bottle of wine. I felt tipsy and my face was scorching red. Man, I hate wine. I hated it ever since I finished a bottle of wine by myself last year and ended up having a hangover the next day.

The atmosphere in the room was good. Everybody was tipsy and lots of laughter going around. The magic of alcohol is undisputable.

Instead of going to Cavendish with the Muay Thai bunch, Avin and I ended up at Lionel’s place at Victoria Hall. He offered to give me a lift home and therefore I followed him to Lionel’s place. Simon was forcing Avin to go to the Cavendish with him but Avin didn’t want to drink anymore. Avin had to run away from him. We ended up chatting with Lionel for couple of hours.
– 11:50PM

First, crush the biscuit into crumbs and then mix it with melted butter until it sticks together. Then cover the entire baking pan with the buttered crumbs. Bake it for 10 minutes. Pour in the mixture of cream cheese, eggs, sugar, Baileys Irish cream and milk. Bake for 1½ hour at slow heat.

I forgot to get the most important ingredient, which is sour cream. I ran to the nearest groceries shop but couldn’t find any. Feeling desperate, I had to surf the net for an alternative but I couldn’t find any. In the end, I decided to use yoghurt. Don’t ask me why, it was just a guess. Thank god the cake turned out well.

My day was amazingly adventurous. There were many things in England that I’ve heard about but haven’t seen them with my own eyes, especially the hitchhiker Frederick and I saw while driving through the highway. The scruffy fellow was holding a sign saying ‘Manchester please’.

Leeds as usual, was bustling with people, just like how it was last year (I visited Leeds last December). Both of us, armed with our cameras roamed around Leeds city. We shopped for a while. I bought myself a GAP long sleeve shirt and a beanie. Yeah, it’s been months since I shopped!

Leeds city is boring especially when I’m not a woman. I don’t like spending sterling pounds here. I’m saving them for my Easter trip and Europe backpacking trip. That’s why Frederick and I left Leeds 2 hours earlier than our intended time. We decided to have dinner at Manchester’s China Town.

Frederick, with a skill of a F1 driver, speeded all the way to Manchester. The highway wasn’t exactly straight and it was wet. I always have the feeling that my car would skid every time I go through a wet road. However, I slept throughout the journey to Leeds. Poor Frederick had to drive alone. Haha

We had no map and no idea how to drive around Manchester. We had to make couple of phone calls to get direction. I called my former tenant at my house, Lek Yew. He’s in Manchester University reading Law. I asked him whether Chinatown is located near Piccadilly. He answered yes and gave me some direction. I thanked him and without asking how he’s doing and stuff, I put the phone. I felt so bad. Hehe.

We finally found Chinatown, ate dinner and then walked around Manchester. Manchester is a dirty place. There are rubbishes everywhere, homeless people roaming on the streets begging for change and dark alleys offering a free mugging experience. We walked into a small carnival selling loads of things ranging from food, Christmas tree and pottery. Frederick bumped into his friend who he hasn’t spoken for 7 years. It’s a small world isn’t it?

The stalls were already closing by the time we arrived. I ate a piece of maple syrup crepe that I bought from a French looking shop. The crispy little thing was folded into a con shaped cup (funny looking cup). By the time I finished my crepe, I found that all my maple syrup has leaked into the bottom. What a waste!

Sheffield was our next destination. Frederick once again, speed back home. Within 1½ hour, we reached safely back in Sheffield.

Selamat Hari Raya to all my Muslim visitors!

I’m going to Leeds tomorrow with Frederick to do some shopping.

A group of local students will be taking over 16 Watson Rd next year. Robert Neal (our agent) came over to 16 Watson Rd with them to look at the house. I showed them my room and gave them some proper comments on the house. They were pretty happy with the house and signed the tenancy contract immediately. After signing the contract, I asked them whether will they be staying in the house next summer, that is when our contract ends. They answered no. I then asked whether could we stay in the house after our contract ended because we still have to stay for the convocation for our graduation. I expected a Yes answer probably because the previous tenant who stayed in 16 Watson Rd asked us the same question and we answered yes but this time they answered, no. fucking bitches. They said that they have to discuss with the other housemates and therefore they can’t give us a definite answer. Sounds like a valid reason but I personally think it’s probably they don’t trust us with their stuff when they leave it here during summer. Robert neal on the other hand, offered us a place to stay when we move out from our 16 Watson Rd. That sounds great but he’s not the person who keeps to his words. It has been many occasions he never keeps his promises and now we couldn’t trust his words anymore.