Oh my god. When I was at my sister place today, my sister and her children were singing along a television show called Akademi Fantasi. She said that show is pretty popular now and it’s a craze among them. The contestants are now staying at a house at Mines and connection from the outside world is cut off. And every week, they would have to perform something. My god, its Malaysia’s version of Big Brother! For your information, Big Brother is a reality television show. Contestants are required to spend few weeks at a house without connection to the outside world. All their activities and movement are recorded by video cameras (most western countries Big Brother has cameras in the toilet). Usually the contestants are random normal people (sometimes there are celebrities). This reality television concept has been a worldwide phenomenon. Countries such as UK, US, Brazil and Australia has it. However, the most unique version is the Africa version. It features contestants from a few African countries such as South Africa, Ghana and Nigeria. Couple of weeks ago, the UK and Africa Big Brother TV exchanged one of their contestants for a week.

Wingardium Leviosa…….*PoOooF* ( Hermoine casts her wand ) Stumbelina magically appears out of thin air. Muahahaha..I’m back to bloggin’!! Many reasons explain my absence. Since the exams, I have not actually settled down. Been to Lake District, London, packing and moving, ‘deprived’ of internet connection…yada yada yada…the list goes on and on…O.k. sum it all up, it’s pure laziness, folks!!!

Harry Potter And The Order Of The Phoenix is selling like chicken in the market now!!..I’m no Harry Potter fan, but I do like the movie. It often leaves me with some sort of magical bliss after watching the movie. I prefer Harry Potter to The Two Towers ( I’m still a kid 😛 ), no one will believe that I slept through the two towers and Fred had to get me up when the movie comes to the climax…(wipes saliva before Fred continues from where I dozed off ..keke). It’s really sweet of him though.

I am and never was a fan- fiction fan. I am glued to the gloomy boring fictions. And they all share the same theme. I just realized that my favourite novels have some sort of melancholic insight. They are THE HOURS written by Virginia Woolf – who apparently committed suicide, THE BELL JAR by Sylvia Plath- and yes, she committed suicide by shafting her head in the oven, and THE VIRGIN SUICIDES ,PROZAC NATION..yucks yucks yuckss…my little morbid obsessions.
I guess it’s time for some fan-fictions! Kisumassa ligoof (magic words) fairies, hobbits, and dwarfs will rule my world now 😀

I have developed an itch. (God save me!! Not another depressing interest?!!) I have always been interested in the life of the famous legends, Kurt Cobain, Madonna and Marilyn Monroe. I’m curious on how people like them who considered to have-it-all , money, fame, sex, what more can they ask for, yet, sill ain’t contented with life. Last year I read on Kurt Cobain’s biography. It was said that he suffered from a childhood trauma and drugs been his sole dependent of happiness. I don’t know if that actually made him pull the trigger and blew his head off? In fact, Courtney Love recorded a suicide note of Kurt. To me, it sounds really fake. I guess for the information that I gathered, they are merely media sources, how valid are they, we will never know. Sometimes it makes me wonder, among all the pretty things in life, they gotta pay it off with suicide. Depressing!! I’m actually looking forward to getting a biography of Marilyn Monroe in Fopp at Cavendish Street for 3 pounds ;p

Talking about Marilyn Monroe, I have these photos uploaded for you guys. It was taken in Madame Tussaud in Amsterdam. Girlz, we’re the Marilyn wannabes.. HrMm..Boys…that picture didn’t turn out too rigt huh..?!! notty notty!! [sorry folks, I can’t get the pics uploaded because i couldn’t transfer the files to my friend’s laptop, shitty technical probs..driving me up the wall!!!]

WoaHh.. There was this earsplitting-loud thunder a few seconds ago. This was the first time I heard such loud thunder in UK. HMmmM..a sign from the above trying to tell me something??

On a different note, I have eventually found a flat in central London. Neat neat!!. I have a double bed!! WeEe!!.No more squeezing everyone in 1 single bed..Wahahha..This time I’ll have the whole double bed to myself…and I’m gonna hog all four corners of the bed. 😛 hehe…Anyone wants to come visit me ? Free bed and breakfast..(Cook YOURSELF!)

Fuck, I still can’t sleep. Insomnia is really killing me. Someone help me pls!!

My first taste of absinthe
Absinthe is a concentrated alcoholic drink with 89.9% alcohol. It could make you hallucinate and people are known to have died from over consumption of absinthe. Zing’s girlfriend, Faith was the bartender of the night. She held a spoonful of sugar and poured absinthe on it. She then lit the sugar and let it burn for a while. The burnt sugar is then mixed with the drink. The taste was horribly bitter. It was burning all the way from the throat till the stomach. My face slowly turns red while the gang was sadistically enjoying my transformation from a human being to a tomato. 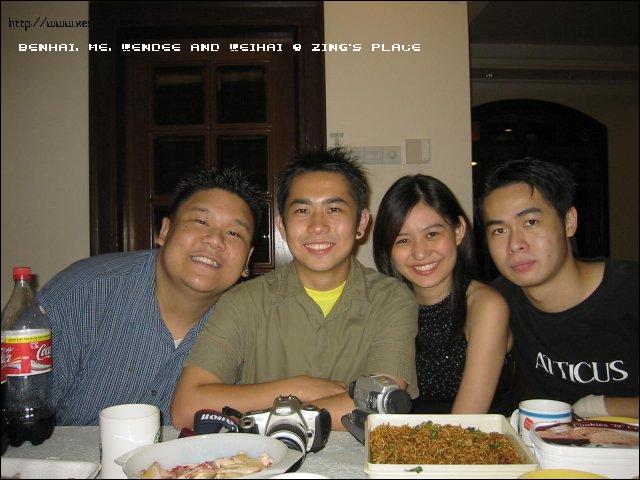 Irene’s 23rd birthday bash
No details needed, just that Irene, as usual, got drunk and KO-ed. 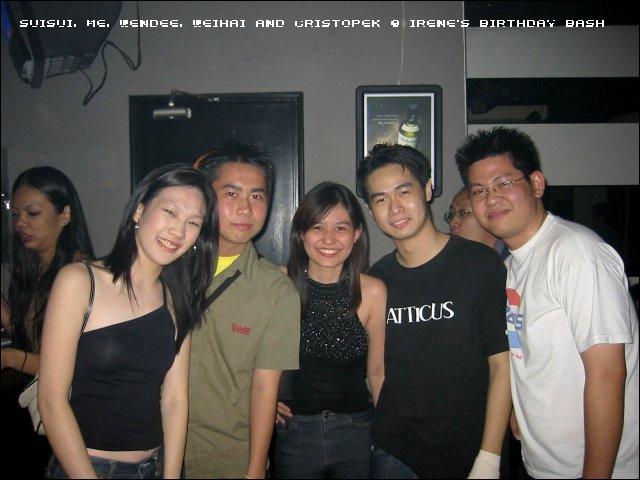 hOOoWaaAhhHh I am back blogging and I am confused as hell. Ok yesterday we got our results and I was in a state of euphoria for a mo to see that I graduated with a second class upper degree. But I was like nO WAy I could have gotten that and furthermore I had no marks for my Corporate Insolvency paper, so itchy butt, I called the university and asked them to check for me. Then after being passed to half a dozen people and listening to the tuneless muzak tinkling in the background as I was put on hold, I was told that there has been a series of result statements sent out in error and mine must have been one of them. They told me that the correct results has been sent out along with a letter of apology from the university. Ok, no problem there, second class lower degree is swell too! 😀

Then today I received the “corrected” result statement which still had nO marks for my Corporate Insolvency paper, nO apology letter and my degree classification is still a second class upper. wtf…. but I am suppose and I aM graduating with a second class lower!!! Quit playing around with my emotions goddamnit… 😛 Altogether now, the british system SUCKS!

Moving on, I was randomly reading a book when I chanced upon an article regarding stone circles. I am sure Leong remember us climbing and walking for miles in Lake District before reaching on top of a hill in Keswick where the Castlerigg stone circle lay. Leong and I even took a picture there sitting on one of the stones with Shane. For most of us it was a disappointment, coz how interesting were a bunch of stones anyway? But reading the article made me regret not bothering too much about it coz that circle of stones have long been a topic of discussion regarding the mystery that surrounded it. That site has shown anomalies of magnetism, gravity and radioactivity that accounts for many psychic experiences that have been reported by people who have visited the circle. The westernmost stone of the 38 stones has shown unusually powerful magnetic properties by twisting a compass needle out of kilter. Weird lights have also been seen and reported throughout the years. There also has been claimed that the stones emit a strange sound at dawn each day. Wah, it would be damn shiok to experience all this kinda stuff while we were there… but they were just a bunch of boring stones really… 😉

And yes, tonite is Irene’s birthday bash 😉 and YES, this time I will bring my camera WITH batteries!!! 😉 Laters all!

Ok, a little update about myself this week. I’m feeling much better as compared to last week, met up with a bunch of wonderful friends (you guys know who you are), watched 3 movies at Mid Valley in 4 days (getting sick of it now), bought a book called 48 laws of power (it’s for people who wants power, watch power, or arm themselves against power. It has loads of wicked and deceptive ways. Not really my type though) and tried to get myself busy as much as I could. Ah, can’t wait for more good things to come (trying to be optimistic here)! 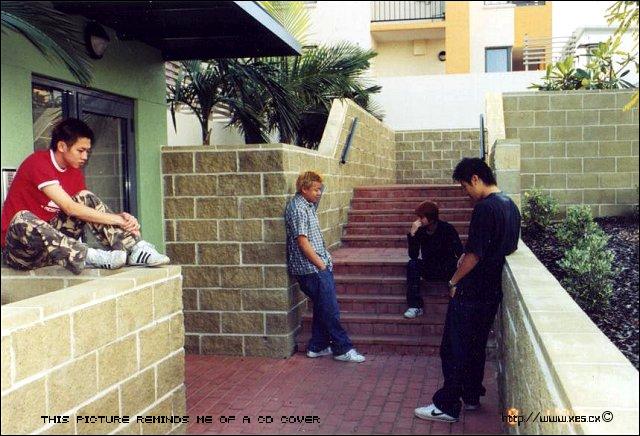 I finally got to meet Iris and Sui Lin last night 😀 We were at Lotus, Bangsar. It was like a mini blogging community gathering. I think there were about 14 to 15 people (too lazy to name all of them) Pictures will be uploaded soon but lemme try to finish 16 shots within this week 😀
– 9:17PM

Thanks everyone for your advices and words of comfort but there are things that I should keep to myself. Damage has been done. Now it’s up to us to patch things up.

Anyway, my friends and I stayed overnight at Port Dickson to celebrate Soon Loong’s 22nd birthday. We had a beach side barbeque and we bought loads of seafood (for once we didnt have chicken wings). But I think we ate more sand than food. The food was good though. We had lamb chops, cuttle fish, stingray and so on. We stayed at an apartment, which claimed that they have the cleanest and best beach in PD. Quite true, we could still see sealife on the beach. Kiang and WK caught loads of tiny crabs back home. I’ve no idea what they’re going to do with them (dont think those crabs are edible btw). When I was a kid, I brought loads of sea crabs back from Port Dickson but unfortunately they died the next day. I think I was dumb enough to put tap water with salt to replace the essential seawater.

I didn’t feel well throughout the outing. After the BBQ, I slept all the way through Soon Loong’s cake cutting session and Barons session. What a good night to waste. 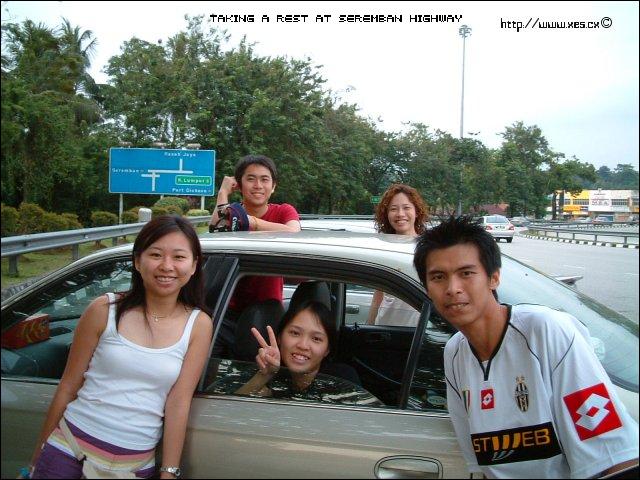 If one day, you saw your girlfriend hugging this guy from the neck and her nose touches his nose and was about to kiss, and when you ask for a break up, she walks away without saying a word. She says that she’s flirtatious and doesn’t want to change a thing. And when you ask for forgiveness, she tells you that you are not her type, wants to be single, doesn’t want commitment and blames you for not being able to accept what she is. How would you feel?
– 12:26PM