Priced @ RM4 for a small bowl and RM5 for a large bowl, you’ll first find it weird to have peanuts on your noodles. But once you have a taste of it..oOoOOooohhh…you will want more.

Can anyone tell me the difference between “honesty” and “intergrity”?
Dictionary.com defines intergrity as “Steadfast adherence to a strict moral or ethical code;The state of being unimpaired; soundness;The quality or condition of being whole or undivided; completeness.” Whereas, honesty is defined as “the quality or condition of being honest; integrity;truthfulness; sincerity.”
If someone ask you to choose between honesty and intergrity as a value in life, which one will you choose?
Seriously, i can’t tell the difference between the both of them. If i choose to be an honest person, i choose to be a person with integrity person as well. What is the difference!!!
Is honesty and intergrity like the picture below? It might look as it is but if you turn it around, it is completely different.

WARNING:: This post is not suitable for children under 18! If you are under 18, please look into the eyes of this girl below and say “i have neglect to read the clear and easily understandable caution statement above and hence i have given up all my rights to sue www.xes.cx and any of its members.”

Before I succumb to the wrenching lifestyle of legal work this 1st December, I’ve decided to make a trip down to Seoul, Korea for a 5 days 4 nights holiday starting 22nd November.

Yes yes, I’ll try to get you guys some souvenirs.

I’ve made a list of places to go. They are Gyeongbokgang Palace, Dongdaemun Market, 63 Building and Chongno-2-ga. And of course, the Philatelic Department of South Korea Postal!!

Introducing the most delicious stamp ever!!!

Any other interesting place to visit in Seoul?

I thought of visiting the 38th Parallel at Panmunjeom (the buffet zone that divides North and South Korea). However, I heard that all tourists must follow a tour group and certain places of interest are not accessible (for example the discovered tunnels built by North Koreans. However some sources claims that it is accessible).

Btw, any South Korean readers want to meet up in Seoul (I doubt I have any though)? 😀

I am lazy so there will not be any 18SX story from me today.

When i was young, my teddy was my best friend. He looked so cute and innocent. Just like this:- 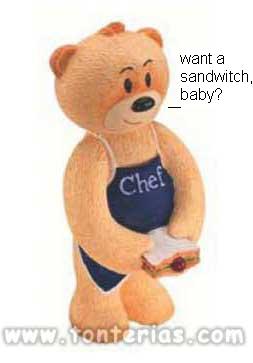 I wanted to kick Teddy out of the house but he was too cute, so i couldn’t do it.That was the biggest mistake i ever made in my life.Under Teddy’s influence, i too have become

We (former Sheffield Uni classmates) celebrated Michie’s birthday with dinner at San Francisco Steak House, KLCC. This is the 5th consecutive year celebrating with her. However, this time without alcohol though. She has very low tolerance towards alcohol. Even Bailey’s Ice cream could get her drunk. Who can forget the “HOU YIT AHHH (It’s hot!)” incident (Sorry private joke!)
Gillian got her a great cake while Cynthia got an extra large card. I wanted to get her a cocktail (preferably Graveyard) but unfortunately, I had to rush for an appointment with my other friends. If only the cocktail plan had worked, Michie would have went.. HOU YIT AHHH (It’s hot!) and the proceed to…..ok i better stop now before she kills me!!

Well, the meet up didn’t happened. We were supposed to meet up at Alexis’s hence Sam and I headed down to the Alexis’s @ Bangsar.
I called ivN as soon as I reached there.
Me: hey where are you?
ivN: walk inside, we’re on the right!
Sam and I walked in. There was no ivN on the right, only the kitchen and the toilet. I called again…
Me: eh I don’t see you.
ivN: mmm, we’re on the right! Ok wait, Leonard will meet up with you @ the front door.
Sam and I waited… few minutes later Leonard called.
Leonard: eh where are you?
Me: In front of Alexis. Bangsar’s Alexis.
Leonard: ivan didn’t tell you Ampang’s Alexis?
Me: oh there’s one in Ampang? Ma chau hai….
Leonard: ma chau haii…..
We ended up watching football with Him and Umeng @ Hartamas Sq.