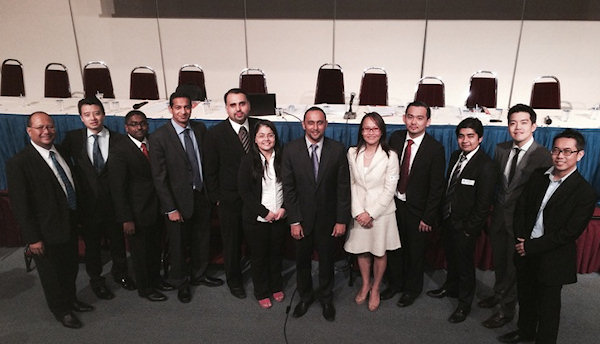 Unlike last year, there was no voting as there were no extra candidates running for committee. I am chairing the Kuala Lumpur Information Technology and Publications Committee again this year.

I was also appointed as a co-chairperson of the Malaysian Bar Ad Hoc Committee on Personal Data Protection. Suaran Singh and Steven Thiru are my other co-chairpersons. I had asked for this committee to be formed when I was in the Bar Council Intellectual Property Committee. There was only a few of us in this Intellectual Property Committee that knows data protection laws well hence there was a need for a new committee to manage this new law.

I contacted quite a number of lawyers to join the committee and all of them were interested. For the first time, we had a group of Malaysian data protection lawyers sitting together to discuss on the data protection practice for lawyers. I am glad that many of them are very active. There are some committees that have many members but only a few would contribute their time. Sometimes I wonder why those people who do not contribute would want to join a committee if they are not contributing.

It’s been a busy first quarter for me. Bar work takes up quite a bit of my time but I enjoy it. I get to meet many lawyers and many opportunities arise from there. I guess some recognition by other fellow members is priceless.

Notwithstanding my active participation in the Bar, the Bar Council recently announced a ban on the use of virtual offices by lawyers. Circular No 049/2014 stated:-

To Members of the Malaysian Bar

It has come to the Bar Council’s attention that several lawyers are operating their law practices through virtual offices.

The concept of a virtual office essentially means there is no physical presence of a law office. The office is “virtual” as it is merely a front, consisting of generic office facilities operated by another company offering the services of a receptionist and/or interchangeable meetings rooms, used by various parties (whether lawyers or not) paying for such services. Any telephone calls made to a lawyer utilising this arrangement are received by the receptionist, on the lawyer’s behalf, who would then convey the communication to the lawyer concerned, for example in a text message through a short message service (“SMS”). Documents are also received, on behalf of the lawyer, by the receptionist. The services of the receptionist and/or use of meeting rooms at a virtual office are shared by other lawyers and/or companies and/or businesses.

The Bar Council is of the view that lawyers practising through virtual offices are in breach of Ruling 7.03 of the Rules and Rulings of the Bar Council Malaysia, which provides as follows:

Where a law firm operates through a virtual office, a further cause for concern arises in respect of confidentiality and the safekeeping of information, including files and documents, which appear to be lax in such virtual offices.

Members are therefore advised to cease such operations with immediate effect, as the Bar Council may take disciplinary action against lawyers who are reported to be operating through virtual offices

It caused dissatisfaction to some lawyers and myself. Instead of sulking, I decided to gather a few lawyers to work on this ban. I was planning to send a memorandum setting out the pros of a virtual office and criticize such ban. However, after meeting up with some of the group members, we decided to send a request for dialogue instead.

One point I learn from this episode is that no authority likes to be challenged. It is best to engage them directly regardless how wrong you think is the decision.

I am pleased that the Bar Council has contacted us to initiate a dialogue. Hope it goes well!