Before one can qualify as a lawyer in Malaysia, he or she has to undergo pupillage of 9 months under a lawyer. Being called to the Bar would be the ultimate aim of a pupil.
Being called to the Bar is one of the biggest events of a lawyer’s life. It’s so big until one day remember it so well as if it were their birth date. Even lawyers who had been in practice for more than 20 years could remember the day they were called to the Bar. In this event, the pupil will appear before a Judge in open court to conduct certain formalities and friends and relatives will be in Court to celebrate the joyous moment.
Upon being called to the Bar, the pupil will be a qualified lawyer. It also marks the day where the pupil will no longer be in the bottom of the food chain and probably obtain a 100% increase in their salary (pupils in Malaysia earns around RM300 – RM1800 per month). It’s every pupil’s wish to be called to the Bar.
So, my colleague K is due to be called to the Bar tomorrow morning. After 4 years of hardship and 9 months being in the bottom of the food chain, he could finally see the light.
When I saw him in the evening, he screamed, “I’M GETTING CALLED TOMORROW!”
An hour later,
K: Dude, did you see the email from KL Bar just now?
Me: OH YEAH. 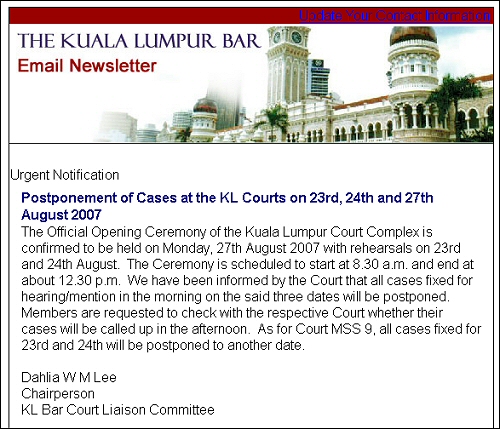 K: THEY’RE GOING TO POSTPONE MY LONG CALL OVER THE REHEARSAL!! A DAY BEFORE I GET CALLED! WTF!!!!!! \(*O*)/!
Related Links:
Former Miss Malaysia/Universe Elaine Daly called to the bar
Hon Wai called to the Bar

5 thoughts on “Being Called to the Malaysian Bar – Part II”