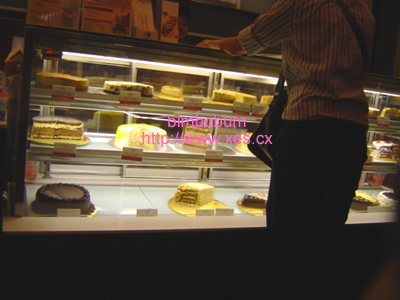 Wahahaha! Sorry about the topic. I initially wanted to talk about bums, but as you can see from the picture here, you have a clearer view of the cakes and not bum. Sigh.
What is your favourite cake at Secret Recipe? Mine is the Chocolate Banana, sometimes the Oreo Cheesecake or Chocolate Indulgence.
Bums. I have a girl friend who enjoys checking out mens’ bums. I don’t know how she does it, but when she does, she’ll nudge me and say, “Hey, check out that guy’s bum. Sexayyyy…..”
And I’d look to find out just how sexy it is, but disappointed that it looks normal to me. Like seriously, how do you judge a man’s bum? How it fills out his pants? How round it is? How they connect to muscular thighs?
And how to describe a man’s bum to be CUTE? o.O I am terribly inexperienced with mens’ bums! All I know is that it cannot wobble when he walks, because then it’s a sign of a flabby bum and in need of toning, or it can’t be too round that his pants looks too tight from the back view. ;D
I mean, I’d have to grab his bum cheek and give it a squeeze to find out how firm it is, then I can say, “MMMM SEXAY!”
*drools*
*goes off to squeeze frank_omatic’s bum*