“Among the no-no names for Malays are Zaniah (female adulterer) and Woti (sexual intercourse). Zani is a male adulterer.
While it is crass to name your son, Ah Kow (dog), the department has also Ah Gong (unsound mind), Chai Too (pig), Kai Chai(chick) and Sum Seng (gangster) on its “undesirable list”.
Besides Karruppan (black fellow), other Indian names which are quite “colourful” are in the undesirable list, like Sivappi and Vellayan (both meaning fair), and Amma-kannu (mother’s eye).”
“…. parents are not allowed to name their babies after animals, insects, fruits, vegetables or colours…..”
[source – The New Straits Times]

Reading NRD has no right to dictate to parents and What if your name sounds like ‘waiting to use toilet’? [A prominent figure with a peculiar name, but he doesn’t mind it!], you will realise that the public are well versed with meaning of names and have no qualms in choosing distinctively unique names. So what if their old parents who may not have known how to read and write named them something which gave their children a hard time in school?
A person grows up being comfortable with his name. If you’re not, then fine, go ahead and have your name in your MyKad changed, and you’d have to go through a process of filing documents in court and the NRD. And they make it difficult for you.
I still have people having difficulties in pronouncing my name, but i’ll just smile and correct them, secretly thinking they’re just stupid fools. hehehe. So easy also cannot pronounce! ;P 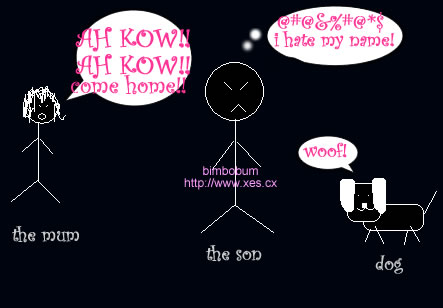 26 thoughts on “No “Undesirable” Names, Please”