because we couldn’t think of anywhere else to go, my friends and i decided to head on to william’s at taman mayang jaya, pj (near the old limkokwing insitute/university) for a nibble. of course, i told myself that i shouldn’t be eating – *ahem* diet! ;P
because the tummy started rumbling (i.e. must eat!), i opted for the “roti ayam special” (chicken special in ‘bread’?) from the list of roti the guy had rattled off. 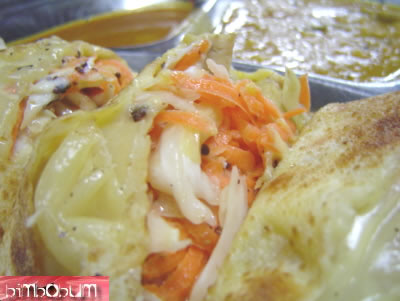 eh? where’s the chicken?
it looked like the roti salad i previously tried, all that vege sticking out. i usually have the garlic cheese butter naan. i’ve tried the macaroni & cheese naan (which cost RM7), the baked cheese pasta thingy, roti hawaii (which xes TOLD me it’d be good and had stripes of mayo on top – but they only do that at murni’s @ ss2!) and etc.
it was alright. i did find chunks of chicken hidden within the grated carrot. ;P and i felt healthy for the load of carrots and cabbage. hehe.
i have to hand it to them, they are really creative with their menu. but i think they’re just too expensive. it cost about RM5, i think. a friend ordered a plate of onion rings which cost RM5 as well. but goodness, you can count how many rings there were – 12? even Burger King‘s onion rings are reasonably priced. ;P 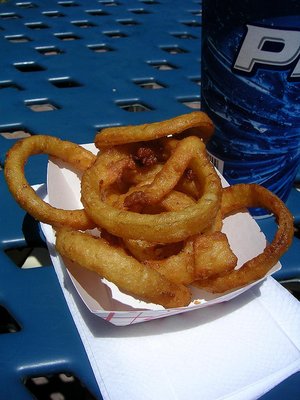 [image taken off from http://en.wikipedia.org]
the onion rings didn’t look like this, they were paler. ;P
if you know other places for nibbling, do suggest. ;P