When I was chambering, I followed my master to his friend’s office for a meeting. It was my early days of chambering hence everything was new to me.

The first thing that struck me in this office was, “Wah so many pretty girls in this office!”. And in fact, all the staff that I saw were girls!

So anyway, the second thing that struck me was a framed old Court document. It was probably around 100 years old.

Ever since then, I was determined to have an old Court document framed in my office (no, I’ve never though of having an all-female office workforce!).

6 years later, I finally got hold of some old Court documents. Thanks to eBay. 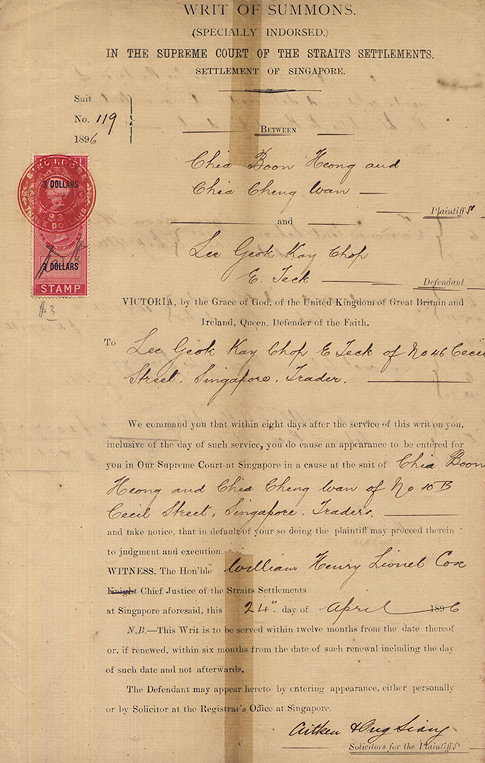 Writ of Summons prepared by Messrs. Aitken and Ong Siang, a Singaporean law firm established by the first local-born lawyer Sir Song Ong Siang and his friend from Raffles Institution, James Aitken. The form of a Writ of Summons hasn’t change much till today. 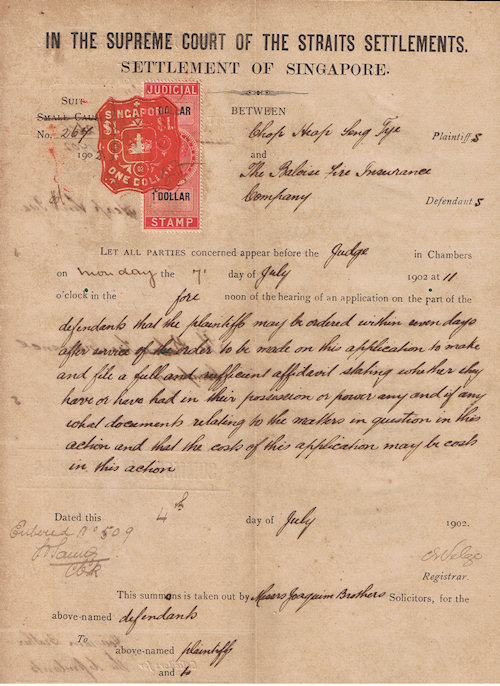 Summons in Chambers prepared by the firm of Messrs Joaquim Brothers (what a cool name). Court starts at 11am in those days!

One of the founders of Allen & Gledhill, Rowland Allen worked in Joaquim Brothers until 1895.

Close up of Summons in Chambers prepared by Messrs. Allen & Gledhill. It was started by Rowland Allen, who came out to Messrs. Joaquim Brothers in 1895, having been called to the English Bar in 1893. Mr. John Joseph Gledhill joined him in 1901. It is one of the oldest surviving firms in Singapore. 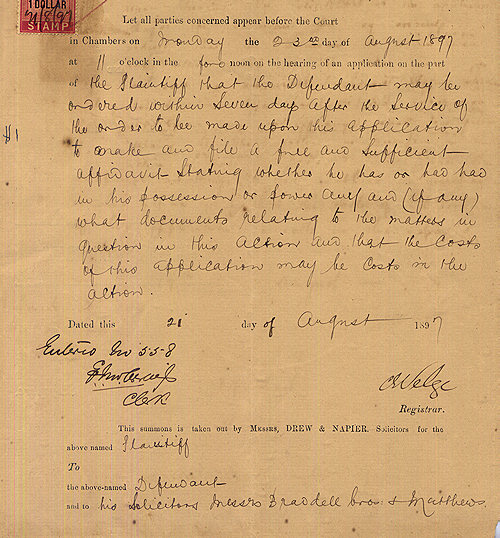 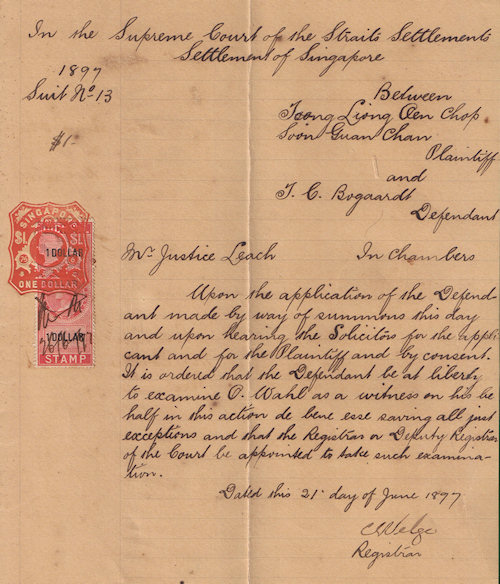 When Mr. Justice Gatty was appointed Chief Justice of Gibraltar, the vacancy on our Bench was filled by the appointment of Mr. Andrew John Leach, who had been educated at Sir Roger Cholmondeley’s School, Highgate, and St. John’s College, Oxford. He was called to the Bar at Lincoln’s Inn in 1876, and practised in Hongkong for some years, acting as Puisne Judge and Attorney-General on several occasions between 1887 and 1895.He retired in 1904, and shortly afterwards died of cancer, from which terrible disease he had been suffering in Singapore, and which made him naturally rather irritable on the Bench.

Mr. Justice Leach was the best equity lawyer we have ever had in the Straits. He was very genial and full of humour, a keen cricketer, and a golfing enthusiast. He was rather a terror in his Court, where his sarcastic remarks and sharp tongue lashed impartially Counsel and litigant. Legal stories are not generally so humorous to the public as to the lawyer, and ” laughter in Court ” frequently follows a remark that seems far from funny ; but the following account of an occurrence in Mr. Justice Leach’s Court possesses genuine humour.

The plaintiff was a young man, whom we will call Isaac Moses, and he arrived in Court accompanied by his mother, a large lady dressed in her best satin dress, and wearing a hat composed principally of red feathers ; she took a seat near the witness-box. The son entered the box, and before being sworn was asked by the Judge what was his name. ” I key ” was the reply. ” What does Ikey stand for?” came from the Bench. The silence of astonishment overwhelmed the plaintiff. ” Will you answer me ? ” came sharply from the Judge, who glared at the witness through large spectacles.

The witness shuffled, but no words came from him ; his mother said in a stage whisper, ” Isaac,” which the young man promptly repeated. ” Tell that woman to sit at the back of the Court and keep her mouth shut, or I’ll turn her out,” thundered the Judge.

A Bible was handed to the witness, who, grasping it quickly, was about to kiss it, when a roar came from the Judge, who was well known to be a devout Roman Catholic, ” Stop—what are you ?”

The witness dropped the Bible and stared at the Judge tongue-tied for some seconds. This was too much for the mother, who, hiding her face behind a large fan, whispered loudly to her progeny:” Say you are a Roman Catholic, Ikey !”

Doubtless the ceiling fell and justice was done ! An eye-witness told the writer this story, and it is too good to escape preservation.

I’m looking for more of these Court documents especially those dated back in the 1700s and 1800s and also Japanese Occupation period court documents. If anyone knows where to get them or knows of a good place to frame antique documents, please let me know!