Due to King Bhumibol’s 60th Anniversary to the throne, the Thailand postal has issued a stamp commemorating the event. I’ve tried getting hold of it but unfortunately my colleague and my Dad couldn’t get it for me. Bah. 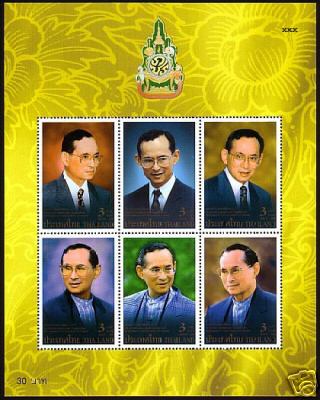 2 weeks back, my Dad was in Thailand for a week. He told me that his Thai colleagues were all donning yellow tshirts that said “We Love our King” to celebrate King Bhumibol’s 60th Anniversary to the throne.

The King of Thailand, More than a Monarch (Have a read)

On the 10th of June 2006, it was the King accession to the throne for 60 years and he is the one and only King in this world who has ruled and served the nation for the longest period of time. The celebration for the King was known as the Diamond Jubilee, marking his accession. According to local radios and tvs, all monarchs from every country flew in to Thailand and all hotels along the Chao Phraya river bank was fully booked by tourists to witness this massive event which held along the river.

The King of Thailand King Bhumibol Adulyadej was born in Cambridge Massachusetts in 1927 and is the third and youngest son of Their Royal Highness Prince Mahidol of Songkla.The King of Thai may be an ordinary person but he is a King with extraordinary love, passion and devotion for the people of Thailand and Thailand itself. King Bhumibol took part in most of the projects for areas or places where tragedy occurred and gave numerous help and support for the poor in the rural area of Thailand. Schools were also built by the King, not one but hundreds all over Thailand for its people to have good understanding of the importance of good education. The King took part in every project individually in arranging and to pursue a better tomorrow for his people. He was once being referred as “The light of Thailand” by its people and regardless of any circumstances the King will always be there in the first place to lend a shoulder for his people.

The popularity of the monarchy, at its lowest during the reign of Bhumibol’s uncle, King Prajadhipok, improved when his brother, King Ananda Mahidol, acceded to the throne, and reached an unprecedented level during King Bhumibol’s reign. The King commands great respect among the Thai people, who view the monarchy in a semi-religious light and admire his hands-on approach in helping Thailand’s rural poor. He manages this by extensively touring the various different corners of the country and by installing various medical aid and agricultural projects. His rare political interventions, generally viewed as being in favour of democracy, also added greatly to his already enormous prestige.

One of his avocations, unique to the Monarch of Thailand, is to preside over the commencement activities of the government universities. Formerly most graduates from the government universities in Thailand received their diplomas from his royal hand. In recent years, however, this tedious work has been delegated to the prince and princesses.
Having had the same monarch now for 60 years, few Thais can remember any other head of state. King Bhumibol’s image is prominently displayed all over the country, including on every coin and banknote. Thais take any suggestion of disrespect for the King, by Thais or foreigners, very seriously.

Me, myself didn’t realize at all how much the Thais love their King and how much the King mean to them till my company announced that there was no holiday for the 12th and 13th of June which was the celebration of the king’s accession to the throne for 60 years. Some workers cried, some working like without a soul and some just sat there without the strength to say a word.

During my early days in Bangkok, i was confused why we needed to stand up in the cinema before the movies started. And then a song and image was played on the big screen, it was to pay respect for the King. I don’t understand why they need to do so in cinema. Also everyway you go, there’s a picture of the King as if he was looking all over Bangkok with his caring eyes.

After almost 2 years in Bangkok, i understood and saw with my own eyes what the king has done for his people. What the King did, isn’t for his own popularity but everything he has done, was from his heart and soul for every people of Thailand.

Well, I felt I was lucky enough to witness this event which will be written and marked in the history of Thailand and the world.
Here i would like to say, Long Live The King and may The King stay healthy always. 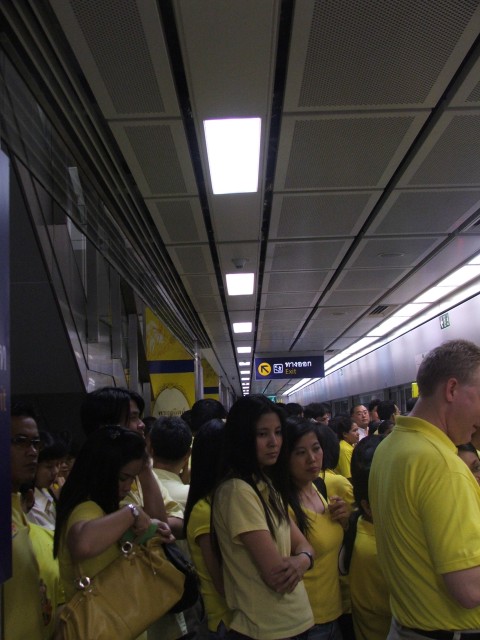 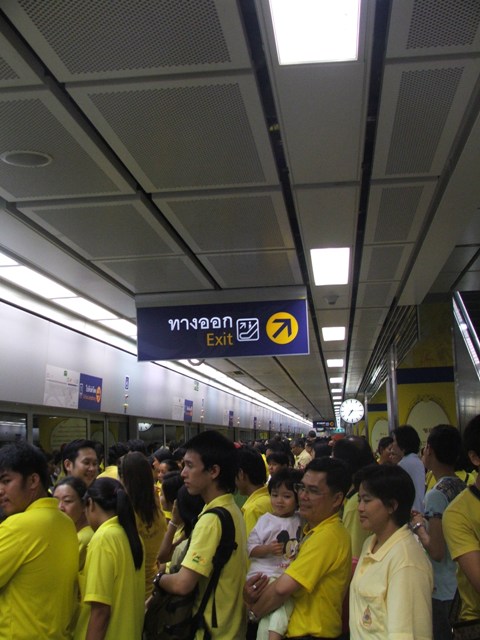 9th of June was the date King Bhumibol accession to the throne 60 years ago. That night there was firework show at the Palace area as a part of the celebration for day one. To drive there was an absolutely silly idea and it is almost impossible for us to look for a parking spot, so i decided to park my car at siam paragon and take the sky train to the palace area called Sanam Luang.

Beyond my expectation the sky train station was full with people packed like sardines. But it was all worth it, why? Because it is a scene that we will never see in most countries. To my suprise 80% of the people that i saw everywhere was wearing the King’s celebration polo-T with the word “We Love Our King”. I’m touched to see how patriotic the Thai people are and the way they devote themselves to the King.

GAAHH I IS SO WANT THAT TSHIRT!!!!

I IS GOT THE SHIRT