March 2008 has numerous events installed for us.
The highlight for this month would no doubt be SpeedZone Tour 2008. 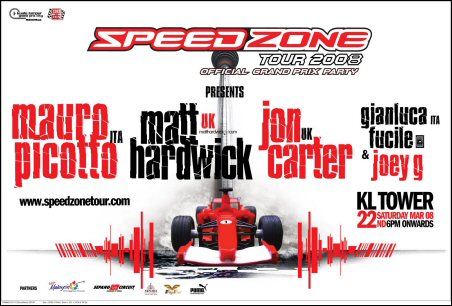 SpeedZone Tour 2008, the highly anticipated Grand Prix party of the year is back with more speed, power and a higher temperature to sizzle Malaysia this March, in time to greet the heat and excitement of the world’s hottest Grand Prix season!
Featuring a spectacular DJ line-up, including the No.1 Italian DJ in House and Tribal category, also headliner of the event, Mauro Picotto; the rising star DJ from Sicily (Italy), Gianluca Fucile; Electro and Eclectic House music veteran DJ from UK, Jon Carter; ranked No. 48 in the 2007 DJ Mag top 100 DJ’s poll, Matt Hardwick; and of course our local talent and celebrity DJ, Joey G, SpeedZone Tour 2008 promises to deliver a pulsating experience at full speed!
Come rediscover the funk of brilliant Tech, House and Trance tempo and be part of the most extravagant Malaysia Grand Prix party, SpeedZone Tour 2008, which will be making its annual, one and only, pit stop on the 22nd March 2008, Saturday, at Menara Kuala Lumpur (KL Tower), from 8pm till late.
Ticketing details
To party for free, just be the first 500 clubbers to register on www.speedzonetour.com starting today, to receive the free tickets.
Alternatively, 7000 tickets are available for sale for RM 33 net, inclusive of one beverage, limited to 2000 pre-sales tickets at Axcess Tickets counters nationwide and online at www.axcess.com.my, and 5000 tickets at the door, from 6pm onwards. *While tickets last!!!*
The party is open to partygoers 18 years old and above only, and all tickets collections and purchases are dependant on display of a valid photo ID.
For more information on the Speed Zone Tour 2008, please log on to www.speedzonetour.com.

wooowwweeee, Mauro PIcotto! One of my favourite Hard NRG DJs!!! My favourite tracks would be:
“Iguana”

GAAAAHHH I WAN TO GOOO
“Komodo”

Both are relatively old songs..but brings back the good memories.
The newest track from Mauro Picotto is “Evribadi”. 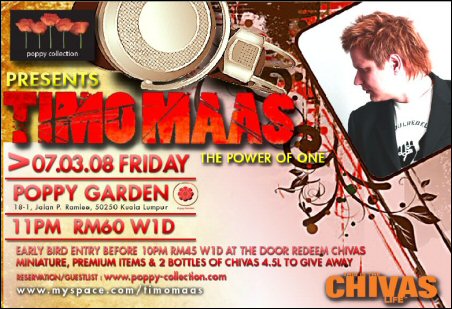 Timo Maas is one of the most well known DJs around the world – playing electronica, progressive trance and techno. Those who knew him would probably remember his remix of the song Azzido Da Bass’ Doom’s Night.

But it’s unfortunate that this world class DJ will be spinning in Poppy Garden, a small club in Kuala Lumpur. I doubt there would be any place to dance.
And a night before election day!! What a bad day!!
Last one for this entry would be the Nuffnang Pajamas Party!

Date: 15th March 2008
Time: 6.00pm – 10.00pm
Venue: Borneo Baruk Club, Kuala Lumpur
Dress Code: Pajamas! (Or anything you sleep in)
This is an invite only event. In order to be invite to his event, you must write a blogpost on the theme “I Sleep Better With Chipster”
Deadline has been extended to 8 March 2008!
More info @ http://www.nuffnang.com.my/pajama-party