This time round, there were only 10 contestants left from the 17 contestants in the Semi Finals. Gurmit, Johnson and I judged this competition again. 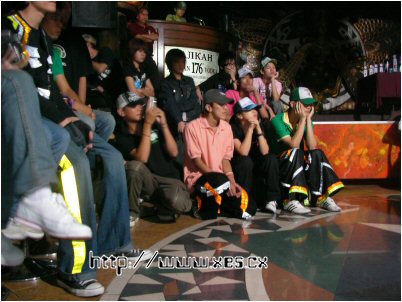 We had the opportunity to be introduced to Freddy, the boss of Station 3. He treated us with some drinks though not as much as last week. Last week was crazy, the manager fed us with too much beer.
Since Swedish Daniel Norstom wanted to check out the scene in Melaka, we brought him along. I hope he had a great time there 😀 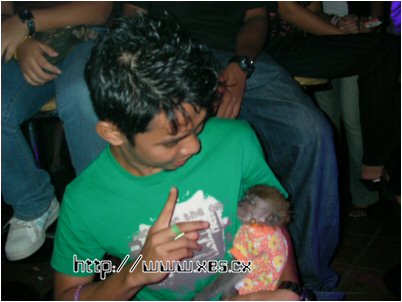 Clubbing Monkey!
I had no knowledge of the composition of the contestants for this round as I was not involved in the calculation of the points given by the Judges. Johnson and Gurmit did all the calculations last week. I was quite surprised with some of the shufflers who made into the finals.
Since the semi finals, I already had 2 people in mind that would win the competition. One would be Hazman and second would be Naim. If last week was the finals, Hazman would have won the competition.
The other shuffler that I personally favour would be Benny. I thought he would be at least in the top 3. Instead, the third spot went to Tajul, aka Mr. Phat Shirt. His performance was very entertaining. He started off with a paintball mask on face, shuffled around the dance floor, took off his belt, then took off his Phat Jacket revealing a shirt with the word “Kill” pasted on it and thereafter he took off his belt. At one point, I thought he was going to strip naked.
Well he didn’t. He ended his performance by popping a party popper with confetti flying around. I laughed out loud when he did that.
Choosing the right songs to dance is a very important factor. Shuffling is all about hard music and as such, shuffle would seem nicer with hard music. Both Hazman and Naim knew this well. They chose hard songs to dance.
Hazman had the opportunity to perform before Naim. The music he chose wasn’t as hard as last week and further, he played the air guitar half way. No doubt, it was one of the best performances.
Naim was next. This time round, he used the song that Hazman used last week. His crowd appreciation was superb. I rated him higher than Hazman. 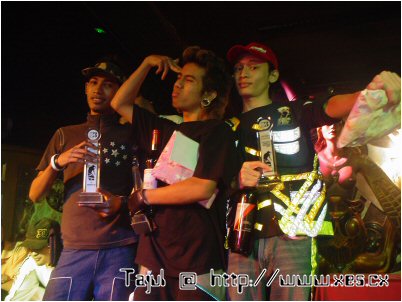 Hazman, Naim & Tajul
The other judges had the same opinion as I do. The winner was no doubt Naim. Not at was lost to the other finalist, each of them received consolation prizes. Johnson and I were presented with a small trophy in appreciation as well 😀 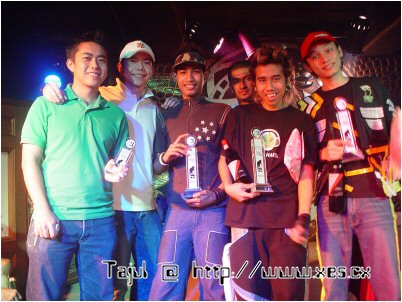 The Winners, Johnson and I
Although I personally think that shuffling is not about competing and to me, it’s all about self expression. Participating in this competition seems to be contradicting my belief but yet I seek to promote this dance to the dance community. Being able to help to promote this dance in Melaka is indeed a great opportunity.
Videos!
http://www.quickdump.com/files/1127094428.html Champion Naim
http://www.quickdump.com/files/1023703418.html 1st Runner up Hazman
After the competition, we spent some quality time with the shufflers. We took tons of pictures. 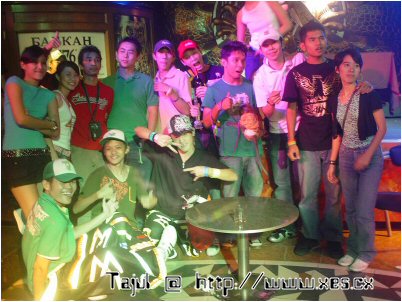 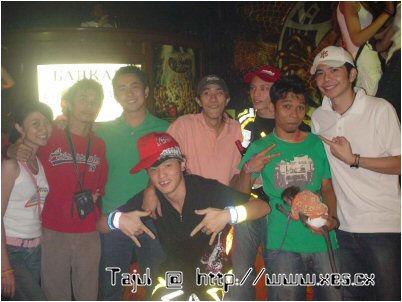 Many thanks to Tajul for the photos 😀
Further, Johnson got lucky. A girl asked for his email and website. Looks like the girl fell in love with Johnson’s good looks during the night! But.. HOW ABOUT ME!!! HOW COME I DON’T HAVE ONE!! CHEEBYE!!

16 thoughts on “The Finals of the Melbourne Shuffle Competition @ Station 3, Melaka 31 March 2006”