I am fortunate to be selected by WWF-Malaysia to write an advertorial for them. I’ve always been actively involved in taking steps to preserve the nature. In this regard, I’ve always recycle every piece of paper that I use and reduce the usage of paper and plastic bags.
Speaking about recycling, my office has a recycle box for paper. I’ve been leaving flyers, paper boxes (even tissue paper boxes) and junk mails in the recycle box.
Lately, I’ve gone to the extreme by saving up all the receipts I get and thereafter, cut them into pieces as stick-it-notes. I usually these notes to my secretary. 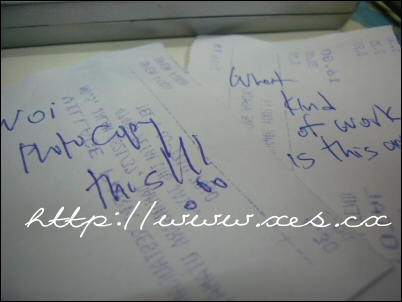 Unfortunately, many do not take steps to preserve the environment. Natural resources give us shelter, food, water and raw materials for industries. By polluting the environment, many animals will be affected and some will face extinction.
The extinction of animals will have a great effect on human lives. Those who lived in the late 1990s in the Klang Valley would clearly remember the water supply crisis. Water had to be rationed through trucks and families would fight over them. I was in high school then. My school forced us to bring our own water supply.
The toilet had no water supply as well. It’s a pain to go to the toilet those days. The cubicle walls had loads of brownish stains on them. Man-made brownish stains..euww..
I remember there was once we had to line up for water in front of a rationing truck. Everyone was in line except for one lady who decides to cut queue. She then screamed, “my house hasn’t had water for days!!!”.
Me: WOI LINE UP LA!!
Lady: YOU SHUTTUP!!
Me: NO SHUTTTUP!!! YOU *t00t* LINE UP NOW!!!
Soon I realize that the lady was my friend’s mother. How embarrassing.
WWF-Malaysia has recently launched a sea turtle conservation campaign and www.xes.cx has been approached to help them. Nowadays, sea turtles are one of the rarest things you see when scuba diving or snorkeling. Most of them are either turned into a souvenir or dead.
Sea turtles play a key role in maintaining healthy coral reefs and seagrass beds. These ecosystems are important for the tourist and fisheries industries. Coral reefs are important in preserving the beach and coastal lines. Without them, beaches will disappear and the topless angmoh ladies will have no place to tan themselves.

Green turtle
Green turtles are largely herbivorous, and their constant grazing on sea grasses increases the healthiness and growth rate of seagrass beds.

Leatherback turtle
Leatherback turtles, which forage in the open ocean throughout their life, are the top predators of oceanic jellyfish.
www.xes.cx is running an online donation campaign for this sea turtle conservation campaign.
You can send a SMS with the following message:
SMS WWF(note: space)Your full name(note: space)Email and send to 39398.
Each SMS donates RM3 (3 bucks only mannn. donate la)
Alternatively, you can donate online through the WWF-Malaysia’s website
Please leave a comment if you’ve donated.
More information can be found at wwf.org.my

15 thoughts on “WWF-Malaysia – Save the Turtles!”