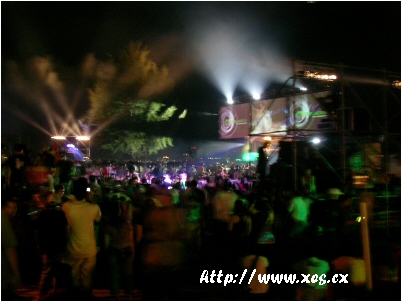 The time has come for this long anticipated rave. 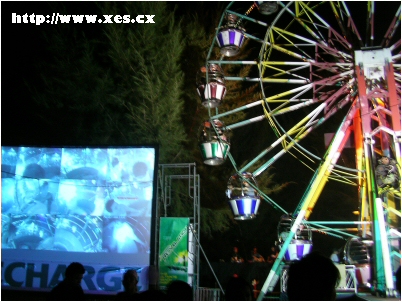 The place was huge. It has 2 rooms and also a Ferris wheel smacked in the middle. Sound system was mediocre and there was a little bit of overlapping between the 2 rooms. It was some sort on the beach..without the seashore though.

It was disappointing. There are soooo many things I want to complain about this rave.

Our phone lines were jammed (probably due to overflow of traffic) and since the place was huge, we spent half of our time looking for friends. I came with Sam, Ivan, Kelynn and Big Ben. Big Ben was no where to be seen right after he was swallowed by the sea of people. It took us an hour plus to meet up with Ping, Hen, Kiang, Sharon, Sui Lin and Cris. 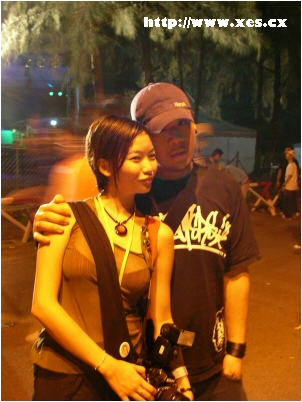 Big Ben & Joyce – minutes before they were swallowed by the sea of people.

There were not enough toilets as well. People had to line up for quite some time just to use the toilet. Ivan and I didn’t bother lining up and ended up watering some plants behind the toilet. We weren’t the only ones though O_O
Parking was shit as well. But we found a nice spot at a golf course, just opposite the entrance to the rave. So while disembarking, a guard suddenly screamed,

It seems that we drove into the golf course using a walkway, ran over their dividers and parked on their green. Ops..

The place was packed, packed and packed!. The music was so-so. Johan Gielen’s set was disappointing, it was not as good as the one he played last year. As for Scott Project, damn.. it was so-so as well. They played the usual stuff…..mega mega white thingg… 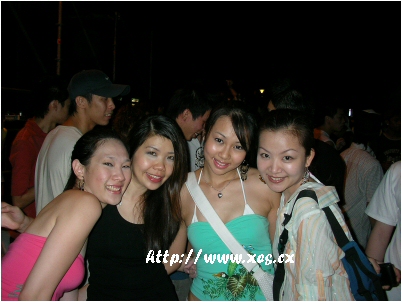 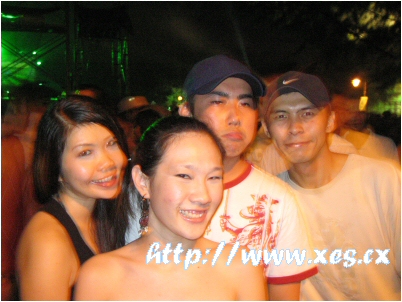 Sharon, Sui Lin, Me (Showing my disapproval towards the rave) & Ping 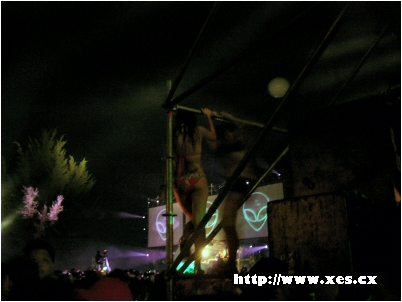 These 2 girls were dancing seductively on the stage. They managed to attract a huge crowd and also posed for pictures. I wonder if they were paid for doing that.

However, there was a mixture of all sorts of clubbers and ravers from all over Malaysia. I bumped into fellow reader, PaKaP from Johor and his friends but lost him after that.

We had to walk quite a bit when returning to our cars. While walking, a car was behind us. He pressed the horn loudly…and someone in the car screamed, “WOI!! GET OFF THE WAY. HAM KA CHAN (WHOLE FAMILY DIE)!!”
Definitely clubbers from an ahbeng village in Malaysia!!!!!!!

We left about 4am. I left with Kiang, Ping and Hen. Big Ben was still no where to be seen.
Damn, this rave sucked. I feel so damn TAK PUAS!! (NOT SATISFIED!)

My internet was down on Tuesday…So, how do i feel when i learnt about it on Tuesday evening?
“Hmmm…no problem lar..Telekom Problem. I just prepare my Skeletal Submission for Thursday case lar.”
The next day, the Landlady ( i share the Broadband with my landlady) call Telekom. They said that it could be there broadband software. They had a lot of complaint from Bukit Raja’s resident. And how do i feel?
“diu lar, Software problem! What have Klang’s port do with PJ’s? Aiya, never mind i just study tommorow’s case lar.”
On thursday, the Landlady told me that the it was the Modem. She send it out to be repaired and we probably would be getting it back in a month time.
“Fuck! One month…what am i gonna do after i get back from work. I don’t fucking have a TV!!!..ARGHHHHH…stress!!!”
On Friday, i tried to play Championship Manager to kill time. Then all of a sudden, my power supply blew…ARRRRRGH…NO INTERNET AND NO COMPUTER!!!
Finally on Saturday, i replaced my Power Supply with a better one and MORE powerful one…The landlady manage to borrow a modem for the Low Yat people. Now, i have my computer and internet back.
Thank You, God. 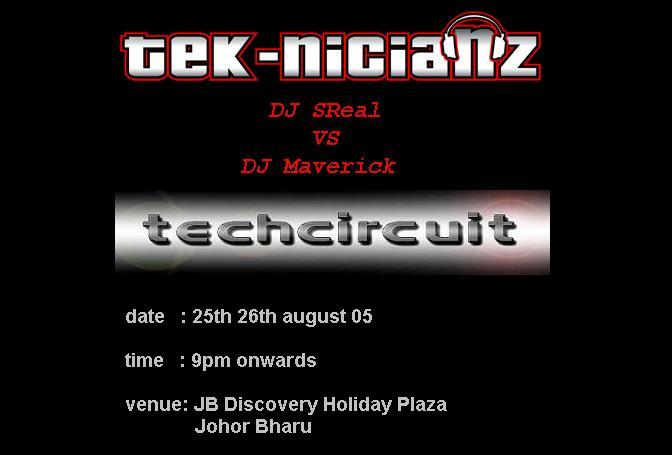 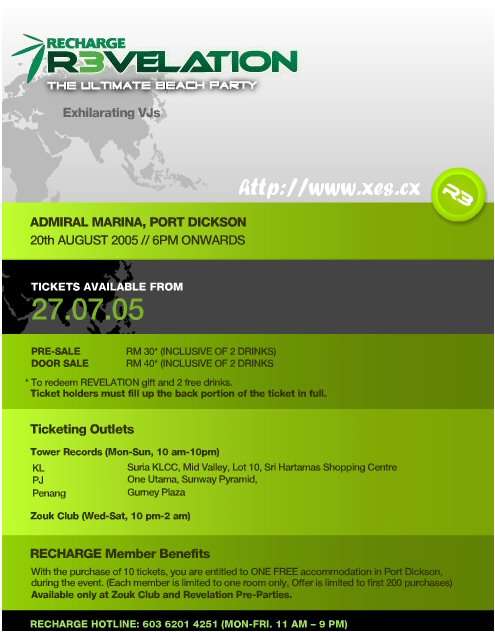 http://www.pervertdesigns.com/revelation/welcome.asp
Oh, I have revamped the Melbourne Shuffle page as well 😀 Please contribute to the contents! 😀 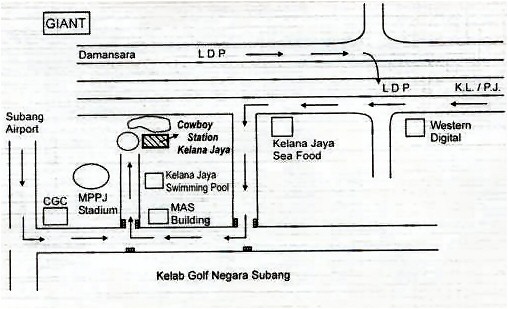 It’s next to a lake therefore the ambiance is nice and cooling. However, please wear long pants as there are loads of insects at the moment. My brother in law is trying to get rid of them now. 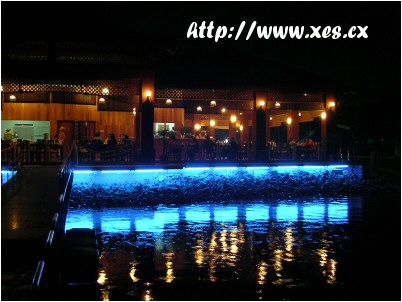 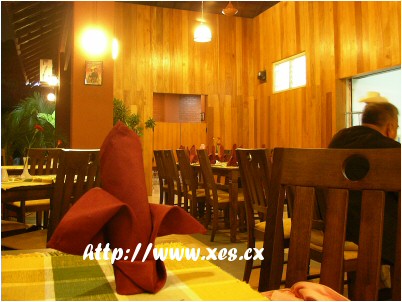 Then my sister gave me a history lesson of the place..
Sister: do you know this is a haunting spot at night?
Me: really??? What kind of haunting spot???
Sister: haha, do you know at night… men would come here and…hehehehe.. you know la, what gay men does to each other..
Me: LOL !!
According to my brother in law, his staff including the cook are former employees of Victoria Station! Therefore, its like having cheap VC steaks! 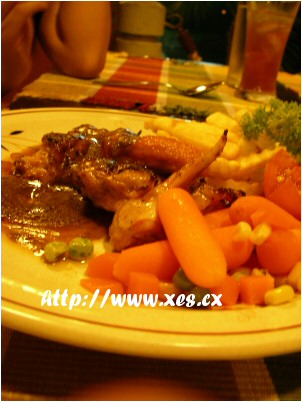 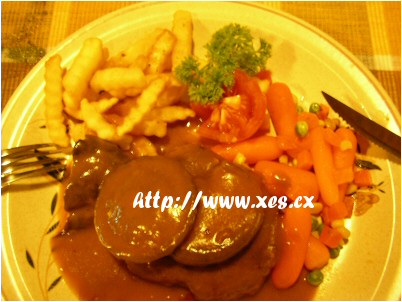 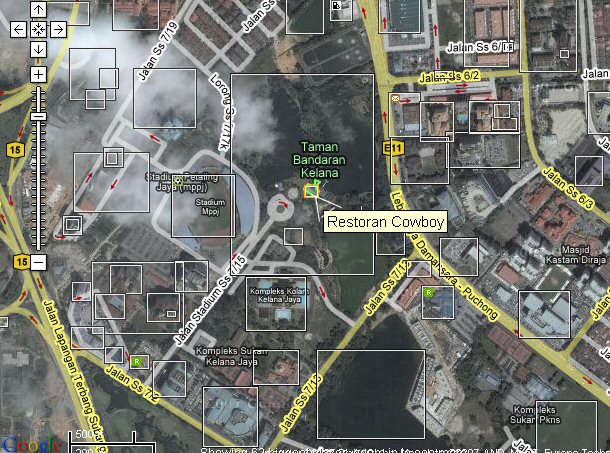 Date: 20 August 2005
Venue: First Floor Auditorium KDU College, Petaling Jaya.
Time: 9AM – 5PM
A chance to listen to leading lawyers and law firm in Malaysia. Students are encouraged to attend as student may, from there, enquire about the life and practice of legal profession. Student may hand in their CVs as well.
Further, male students may also check out hot chicks and as for female students, hot guys. Dont miss this opportunity!
As for me…I’ll be at home saving my energy for Relevation PD Rave…wOOHooo!!!!!!

[“I like the way youu movee!!!” (Latest Dance Song from MobyBody Rockers) plays on the background.. ]

A: hey I like that song. It’s cool.
Me: Eh do you know it’s a gay song? When they play this at clubs, gay men would take off their shirts, throw their hands up in the air and swing themselves like sotongs (octopus)?
A: O_O ehhhh….. I’m not gay!! B, tell him I’m not gay!!
(B looks at A)
B: you’re gay.

P/S: My apologies if I have offended any gay men! 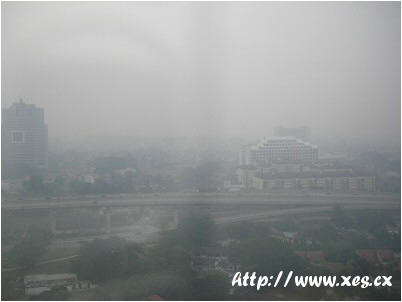 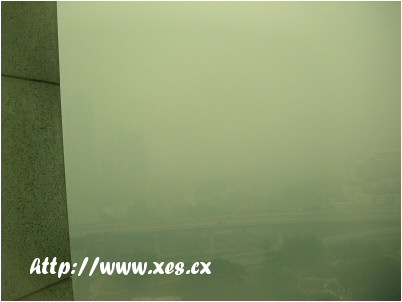 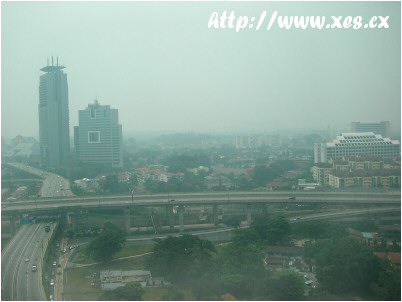 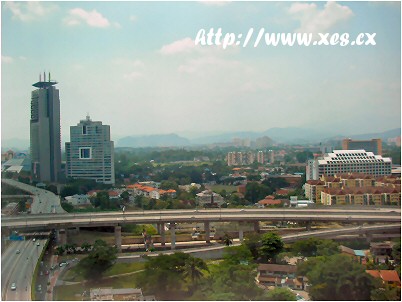 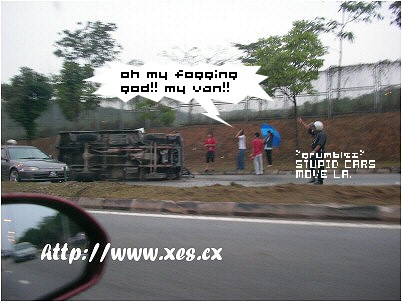 this Van overturned due to the rain..wtf.

Last Thrusday an extremly fogging hazy day, i took the LRT down to KL for a meeting. On the way back, i stopped by Kelana Jaya Station to top up my Touch n’ Go Card. There were this couple standing in front of me, a melay lady and her caucasian boyfriend. I was not very sure what was wrong with their card but it took ages for the clerk to top up their card. While, we were waiting for their card to be topped up…

Lady: Honey, can you see where is my mouth. (The lady was wearing mask)
Mat Salleh: ooooh…let me see.
Then they kissed each other.
Mat Salleh: No, i can’t find it
Then, the man french kissed the lady whom were wearing a mask. God Damn it, get a room lar!!! I was standing less than 30cm behind them. Suddenly…
Man: oooi, apa you orang buat! (oooi, what are both of you doing!)
All of us turned behind and saw a masked melay Guard.
Man: Tak boleh cium cium di sini! Kami orang Islam! (No kissing here! We are muslim)
Then suddenly….
Mat Salleh: ini his-teri saye. Kame aken ber-car-win tak lame legi (This is my wife. We are gonna get marry soon)
The Mat Salleh could speak Melay with American Accent!!! Fogging Hell!!!
Man: Tak boleh. Sini orang ramai! (Cannot! This is a public place)
Mat Salleh: Bah-lik roh-mah bole-hhh buat keh? (Can we do it at home?)
Man: Belum kahwin, tak boleh! (Not married yet, cannot!)
Then,they went on arguing with each other for a good 3-4 mins…Amazingly, their Touch n’ Go Card took that fogging long to be reloaded as well.
Finally, my turn…
Me: Cek, tambeh nilei lime puluh ring-git (Miss, top up RM50 plz)
The Clerk stared at me….
ooooh My God!!! I am speaking American accented Melay as well…FOGGING HELL

gguni wrote in my last post :-
“good shit. But got cases in Malaysia where rich, bald, ugly chinese men got more than 2 wives.
How did they get pass the law? Marry in different state?”
To answer that :-
You see bro, the first wife will be his legitimate wife recognisable in law. The second wife will be consider as his second wife under his own customary and private law. The second wife will not be recognisable as his legitimate wife under the law. Nevertheless, all his children from his second wife will be his children under the Malaysia law if his name is in the children’s birth certificate. Both of 2 wives can live happily with him unless he die intestate, meaning he die without a will. Then, you will see a war between both the wives and their children over his property.
However, i have a better idea how all these bold, horny old man can marry more than one, in fact up to 5. Let’s look at the following scenaro :-
Tan Sri Lee is a afflunet, horny old bastard. At the age 50, he still dream of having more than 1 wife. His wife is so damn understanding and have no complain of it. In order to realise his dream, he converts to Muslim but his wife remain as a non Muslim. Once, he converted to Muslim, his marriage with his wife, a non Muslim is nulified but still recognisable under civil law. They do not go for divorce and just let it be. Soon, Tan Sri Lee hooked up with 4 girls aged between 18-25. He married all of them. So there you go, Tan Sri Lee has 5 wives. One recognsiable under civil law and 4 others recognisable under Syariah Law.
NOTE: This is the author’s own point of view. Should you choose to believe and practice it, the author and the members of www.xes.cx will not be liable for it.