Two weeks ago..
ivN: Rave?? Still young meh!!
ivN: By the way, anyone going to Black Eyed Peas concert??
Me: Concert?? Concerts are for school kids la!!! wahahaha!!
Then few days later, I received a call from A..
A: I WON 2 TICKETS TO WATCH BLACK EYED PEAS!!!
Hence, begins my journey to Genting Highlands to watch Black eye piss.
It was held at the Arena of Stars, Genting Highlands. Arena of Stars is a musical amphitheatre located at the outdoor theme park of Genting Highlands. It has hosted many concerts for famous western and eastern artistes such as Michael Learns to Rock, Sally Yeh, Sammi Cheng and so on.
Kenny and Sui Lin were going too hence we hitched a ride from them. Many thanks.
The amphitheatre wasn’t filled to the brink though. At least 10% of the hall was empty. It was quite surprising as I though such international act would fill a hall easily.
Before the show started, a moment of silent was held for the late Tan Sri Lim Goh Tong (fondly known as Uncle Lim), the founder of Genting Highlands who passed away after a short illness on 23 October 2007. 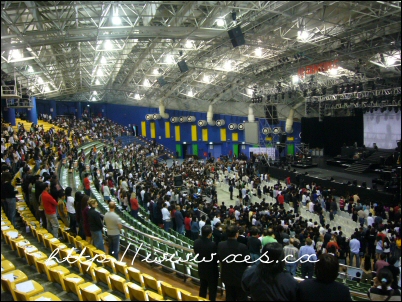 Our tickets entitled us to the standing zone, which is just a stone throw away from the stage. It wasn’t pack at all but our view was blocked by 2 tall blokes. Bahgers.

By 8PM, the Black Eyed Peas consisting of will.i.am, Fergie, Taboo and apl.de.ap appeared on stage. They performed songs like My Humps, Mama, Don’t Lie, Let’s get it started and Where is the Love? Fergie also performed a few of her singles such as Fergalicious, London Bridge and Big Girls Don’t Cry which is a favourite to many. 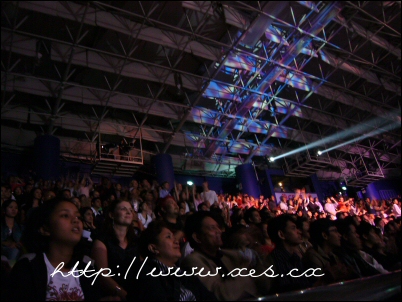 One of the dancers for Fergie’s London Bridge
Unfortunately, the sound system had numerous malfunctions. Some of the singers had problem with their mikes.
I notice that most of singing were done by will.i.am and fergie. Taboo hardly sings but apl.de.ap on the other hand has his share by singing in his native tongue, Tagalog. Apl.de.ap is a Filipino.
Personally, I wasn’t very pleased with the performance. It lacked power. Further, the standing zone wasn’t very comfortable as I had 2 tall guys blocking my view and one guy farting throughout the entire performance. Bahger must had have curry. 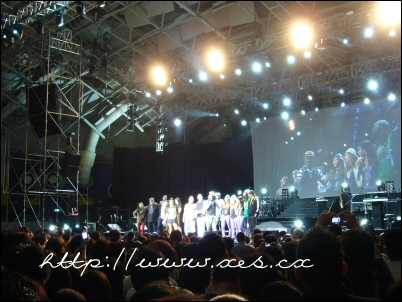 At the end of the show, the Black Eyed Peas and their went on stage to thank everyone
The performance lasted around 2 hours. We headed back home thereafter. While going home, we saw signboard informing the public that they may pay a visit to Uncle Lim’s by taking a bus to his villa.
May Uncle Lim rest in peace.