BTD is short for Blog Transmitted Disease, is a disease or infection which has a significant probablity of being transmitted between bloggers or blog readers by means of excessive blogging or a dependency on blogs as a source of communication or entertainment. the common symptoms of BTD are as follows: thinking, talking, shitting, sleeping and dreaming of blogs and bloggers. Cures and medication have yet to be found.
——————————–
A recent case of BTD was reported last week. bimbobum, aged **, tells her story to XesNN:

“i was in my study room, reading xes.cx as usual, and AC (a prominent female blogger) and another friend, Tom, was in the room with me, chatting as they looked out the window.
it was dark out side, gloomy skies threatening to rain. the window was blowing so hard that i thought the curtains were going to fly off its rails. i was scared, but Tom and AC were not. it was strange to have AC in my room, because i didn’t know her personally.
then Tom and i went to the living room to see what was showing on TV, but it felt weird. the wind was blowing so hard it felt like a tsunami was going to hit my house. but when we looked out the balcony, everything looked calm. just gloomy skies.
we quickly went back into the study room and locked the door, because i was scared. AC was still sitting by the window, in her own world, humming a song to herself. i quickly told her that something weird was going on. but she continued humming.
then suddenly, the light started flickering, and so did my monitor. i started to panic, fearing that something supernatural was going to happen. Tom and AC looked calm.
then the door started to rattle, as if someone outside was desperate to get inside. the electricity went out, darkness surrounded us. but if you looked outside the window, you could see that the skies were just gloomy, and was starting to pour cats and dogs.
the door rattled and shook, threatening to fall off its hinges. we could see flashes of light through the crack, and i thought i saw something white trying to squeeze through underneath the door. there was wind through the cracks as well, like a storm brewing and screaming to get in to the room.
i almost peed in my shorts! i wanted to cry, but Tom and AC were so f*cking calm, that for a moment, i thought they were going to kill and eat me alive.
but AC was stoned as hell, and Tom, apparently was just acting cool. so i started to pray.
the rattling and flashes of white continued, and the wind that blew through the cracks felt like deafening screams.
it felt like forever. but it was only 30 minutes. suddenly everything stopped with a loud bang. like the door flew off its hinges and into our faces.
but it didn’t. the door gave a soft pop, and creaked open a crack. and we waited expectantly. i think i peed in my shorts already by then.
slowly, without a sound, the door opened with suspense. i held my breath, tempted to close my eyes but curiousity got the best out of me.
like a century later, the door opened completely. to reveal ……….. darkness.
“f*ck!!!!!!!!!!!” my brain was screaming at me. i think i wanted to die on the spot.
and suddenly, my monitor came back on, and so did the light. funny, my browser automatically opened to xes.cx and i saw this. 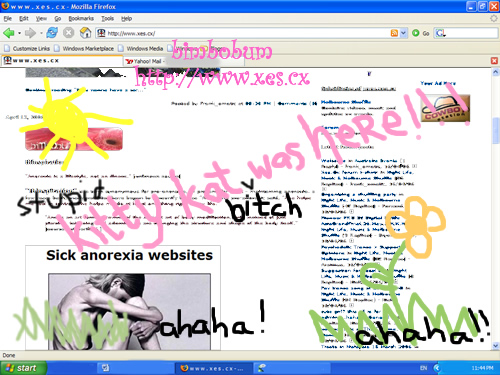 “shit!” i panicked, “that whatever thingy actually screwed up the blog! xes wasn’t going to be too happy about it!” i thought to myself.
but it was just a f*cking nightmare at 945am on a sunday morning. ARRRGGGGGHHHHHh!”

———–
Upon observation and medical check-ups, it is confirmed that bimbobum is suffering from BTD and has been given 124 antibiotic injections on her bum, but doctors are unable to confirm if she is fully cured.
One Dr. Xes, when approached by XesNN for comments, agreed that bimbobum is a severe blog addict who required 24 hour supervision, for fear that she may be a national hazard in the blogosphere.
“It is obviously that her life revolves around blogs, which is unhealthy. she should keep her blogging to a minimum.”
So far, bimbobum is the first casualty reported. she is reported to be safe and alive.