BY ABOUT 5pm every Saturday, the open space outside Maybank at the Jalan Bukit Bintang and Jalan Sultan Ismail intersection in Kuala Lumpur becomes the venue for a huge outdoor party. Teenagers just turn up from everywhere, with music blaring from portable speakers hooked up to their MP3 players and cellphones.

They would slowly find members of their crew, and start to chat and catch up. But many of them have a different purpose for meeting up.

Hidden identities: This group of shufflers came ready with their masks last Saturday, which are worn during dance-offs with shufflers from other groups.

Johnson Lau, 18, has been taking the train there every Saturday from his home in Sentul. Five months ago, he discovered something there that has become a passion – shuffle dancing.

Shuffling is now more than just a hip dance move. It’s a movement. Almost every state in Malaysia now has a shuffling community, and the shufflers are hardcore. They participate in huge events and competitions, and some of them are sponsored by big brands like Hotlink and DiGi.

They take their moves seriously, working hard to elevate it to more than just a dance. It is now a legit street culture with a massive following among teenagers.

At Jalan Bukit Bintang, around five to 10 shuffle groups come each week to create their own dance floor by gathering together in a small circle. Cheering and jeering each other, they take turns showing off dance moves to music from their little portable speakers.

“I think it’s fun,” Johnson said about their weekly gatherings. “I love to shuffle because it helps me to relax, and every time I dance it seems like I have an escape from all my troubles.” 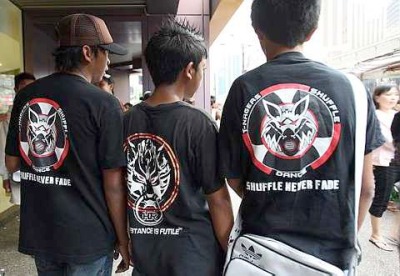 Showing support: These kids are wearing shirts bearing the logos of their shuffle group.

Fellow shuffler Mohammad Nazlee Abas, aka Katong, used to be a DJ and b-boy before he found shuffling. Now he’s already a semi-pro, and a well-known name on the shuffle circuit. Katong is part of a group called the Underground Shuffle Squad, or USS; and claims it is sponsored by a big corporation to enter shuffle competitions.

But at these weekend gatherings, teams like USS and Johnson’s group, Hardstyle Republic, often challenge each other to what they call “full battles”, something like a dance-off. And apparently, they get pretty serious.

“We have a ritual, where the loser – the one who can’t match the other person’s moves, or runs out of ideas – has to give up the shirt he’s wearing (which usually bears the logo of the team), and the winner will have to burn it,” said Katong.

And they really do burn them. Right on the pavement, in probably the most crowded intersection in KL. Even more bizarre is the practice of wearing masks while going into dance battles.

“Sometimes we wear these masks to conceal our identities when we dance-off. That way only after the battle is over will we know which groups our opponent actually belonged to,” Katong, 20, said.
He added that the weekly gatherings at Bukit Bintang aren’t that big compared to the events and competitions they go to. Sometimes they meet at Taman Titiwangsa where hundreds of them come in their pimped out rides to shuffle, with music pumping from their car stereos.
The shufflers are not the only ones at the Bukit Bintang pavement. Hardcore metal heads and rockers also gather here on Saturday evenings, and they aren’t too impressed by what they see from the shufflers. 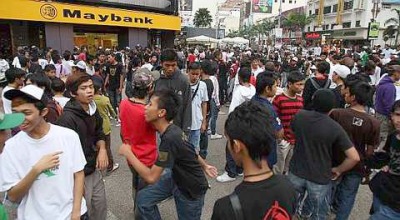 Join the party: The crowd, a mix of shufflers and rockers, in the Bukit Bintang area in Kuala Lumpur on Satuday.

It’s easy to tell the two groups apart. The shufflers have a more hip-hop style, with baggy T-shirts and pants with reflective strips that make their moves flashier. The rockers sport dark colours, have multiple piercing on their faces and have punk-ish hairstyles. To some of them, the shufflers seem like hip-hop posers, and they find their dance moves silly.

When asked about the rockers, Johnson simply said that he “doesn’t want to cause trouble”, so he and his group leave when the most hardcore of rockers and mat rempit guys come in later around 10pm.
Rocker Mohammad Alif Fitri, 23, known as Slay, however, prefers a more understanding approach to his shuffling peers.

“I don’t mind them, really. They should do whatever they want as long as they’re enjoying themselves. I think it’s better to just make friends,” said the well-mannered rocker.

Slay first started getting into rock/metal culture when he was 13, after being introduced to heavy metal music and other hardcore rock genres.
“At first it was just the music, but when I was in Form Three, I started to pick up the fashion too. Surprisingly, the teachers were alright with it! Even now my boss doesn’t mind, because I still do my job properly,” he said.

Nevertheless, Slay feels that some people still misunderstand and judge them based on their appearances. Even his parents found it hard to accept his clothes and piercings at first, but now they have slowly realised that rock is part of his “jiwa” (soul) and that there was no point dissuading him anymore.

According to Slay, all the rockers do every week is hang out and meet other people like them. And sometimes at “events” like concerts or gatherings, other rocker communities from other parts of the Klang Valley like Shah Alam, Petaling Jaya and Putrajaya will join in.
“Actually it’s just a social circle. We meet up to talk about the latest rock trends, dressing styles, discuss music, and just hang out. We don’t cause any trouble, so usually the security guards and police don’t chase us away or anything. It’s just a hobby and fashion style,” he added.

But in spite of what they say, when such a large number of rowdy young kids gathers together in what is essentially a display of machismo, trouble is bound to flare up particularly between the shuffle groups who are there for some “friendly” competition.

Last Saturday, things started to simmer when one or two minor scuffles broke out. Some of the kids fled, sensing things were about to get ugly. Soon enough, just as it was getting dark, a mob of around 20 angry teenagers were seen dragging a guy into a back alley. The others on the street – the youths, tourists, security guards – just watched in silence.

And this was literally seconds after a security guard assured us that the rockers and shufflers almost never caused trouble.

The security personnel hired by the management of private buildings around the area have no jurisdiction to disperse this youth crowd, or to take action against them if they misbehave.

Or perhaps it’s just more convenient for them to take that approach because handling the mob of over a hundred youngsters must be daunting.

“People think they don’t cause trouble, but that’s because they don’t want to be responsible. So they pretend nothing happens. But the truth is, these guys get into fights pretty often.

“Anyway, there’s a police booth right across the street,” said one of the guards there.

The police booth is only a few metres away with a clear view of the pavement.

“All we can do here is patrol the area,” said one of the three policemen who went to check out the scene. “We chase them away sometimes, but they always come back after a few minutes anyway.

“They fight all the time, almost every week. But we can’t do much about it. There’re so many of them, and so few of us. We can’t be watching them all the time,” he said.

After saying that, the policemen proceeded to clear the area, slowly walking around the pavement shooing the kids off. Within five minutes, not a single shuffler or rocker was to be seen.

All that was left was an empty pavement, with barely a trace of the huge celebration of teen culture and passion that was in full swing just minutes ago.

But they were still around, hanging out somewhere in the Golden Triangle just waiting for the right time to reappear and continue partying the night away.

Ok, I better shaddap before I get beaten up on the streets.

10 thoughts on “Dancing in the streets”