SINGER Michael Jackson is facing up to 74 YEARS in jail after being charged with new child sex crimes.

A Grand Jury looking into the case against him ruled he must now face a charge of conspiracy to kidnap a child and falsely imprisoning him. 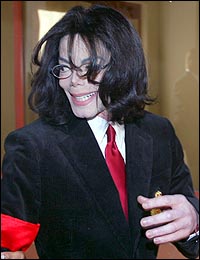 The 45-year-old singer — looking gaunt and under immense strain — was shell-shocked as the escalating charges were read out at Santa Maria Superior Court, California.

The abduction charge alleges Jacko conspired and carried out 28 “overt acts” to commit abduction, imprisonment and EXTORTION.

They accuse Jackson of committing a “lewd and lascivious act upon and with the body and certain parts and members thereof of GAVIN Arvizo (NOT Gavin Tan HAHA), a child under fourteen years, with the intent of arousing, appealing to, and gratifying the lust, passions and sexual desires of the said defendant and the said child”.

Asked by Judge Melville if he pleaded not guilty the singer appeared speechless. He vehemently shook his head to indicate yes.

Jackson also faces four counts of committing a lewd and lascivious act on a child under 14, another of attempting to commit such an act and four of administering an intoxicating agent with intent to enable him to molest a child. 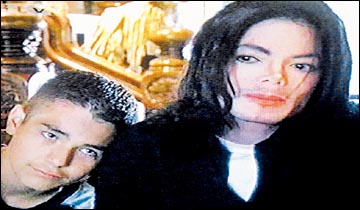 I personally think that Michael Jackson is innocent. According to testimonials of his inner circle, he loves children and doesn’t have any sexual desires towards them.

Last year, I watched the Michael Jackson documentary by Martin Bashir. It was really interesting and I was impressed with his fame and fortune. There was a part where Michael was shopping. He was literally buying the entire shop (he went like, “oh i want this, oh and that, and this too and this this that that”) and the owner had to close the entire stall just for him.

Gavin Arvizo (the alleged victim) was also featured in the documentary. Gavin and Michael were holding hands and Gavin’s head on leaning on Michael’s shoulders. No doubt it disgusted me but looking at an optimistic view, probably Michael treated Gavin as his own child (visa versa), hence what’s wrong with having your own child holding your hands and have their head on your shoulder?

Well…innocent or guilty.. it is up to the jury to decide..