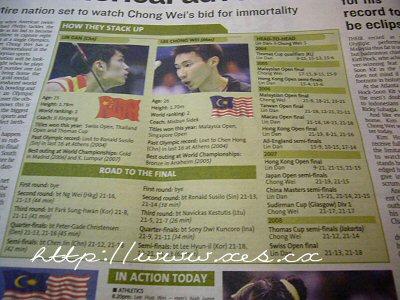 Badminton is perhaps the only sports in Olympics that we can actually count on to win a gold medal. We have been very close to getting one and it looks like we have to wait another 4 years. 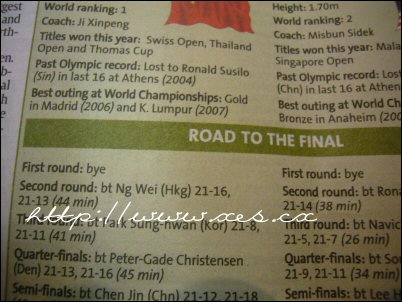 1st Round: bye? I wonder what does this mean…
Hopes were high for Malaysians as World No. 2, Lee Chong Wei had beaten World Number 1. Lin Dan on numerous occasions. At the finals of one tournament, Lin Dan walked out from the prize giving ceremony after Chong Wei beaten him.
Unfortunately, this time round, Lin Dan thrashed Chong Wei 21 – 12, 21 – 8 in a 49 minutes match. Chong Wei was no match for Lin Dan – Lin Dan was fully in control. Interestingly, Lin Dan had never lost a single match throughout the 2008 Olympics.
Chong Wei was visibly upset over the lost notwithstanding that this is his best performance in the Olympics and this is also Malaysia’s first silver for men’s singles.
In this game, Chong Wei has lost his chance to a RM1 million incentive, Malaysia’s first gold in badminton in the Olympics and possibly a public holiday declared by the government.