It’s been one year since friend and fellow blogger, David Thong passed away. He died of cancer last year.
Time flies. Nevertheless, no one has forgotten him yet. He’ll be missed.
On another note, 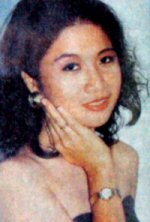 After 4 years and 4 months of suffering, my high school teacher Puan Lim Hwee Nee has finally passed away. She has been in a vegetative state for the past 4 years after giving birth to her youngest child.
Puan Lim taught me history when I was in Form 2. She was an excellent and patient teacher. Never once I’ve seen her raise her voice. Also, most of us remember her because she was the prettiest teacher in school.
I am sure many of us who came across Puan Lim would have at least a pleasant memory of her. I always remember the time when Puan Lim was teaching in class, she was talking about a sword and as soon as she wants to name the sword, I blurted out, “Cura Si Manja Kini!”. She immediately responded, “Pandai anak murid cikgu!”.
Hyong, Foo Tuck, Ping and I paid our final respect to her at a funeral parlour at Jalan Gasing. It was around 11PM, the place was almost empty.
We were greeted by a man of 30s. After chipping in to the donation box, we grabbed couple of joss sticks and paid our respect to her. We didn’t want to see her body as we want to remember Puan Lim as she is in our memory.
As usual, there were peanuts and drinks served. Rather than leaving immediately after paying our respect, we hung out for a while. The man of 30s joined our table. The man of 30s is Mr. Ong, Puan Lim’s husband. From there, he told us of the heart wrenching story.
After Puan Lim gave birth to a baby boy, she was fine. However, hours later, she collapsed and her heart stopped beating. But after efforts by doctors, they managed to revive her heart but it was too late, her brain was already damaged due to lack of oxygen. She has lost almost all her senses and was permanantly disabled. Puan Lim was eventually discharged as the doctors couldn’t do anything to save her.
Ever since Puan Lim collapsed, Mr. Ong has been taking care of her, day and night, selling his business, his car and whatever he could sell. He had seeked the help of all sorts of medical practioner, from Chinese traditional medicine to Western. None of them could cure Puan Lim. Puan Lim couldn’t remember anybody and couldn’t speak.
Also, Mr Ong had tried to seek financial assistant from the government. For reasons that are revealable to the public, all of Mr. Ong’s pleas were unheard from the government.
Puan Lim’s birthday is coming up in 2 weeks time. Mr. Ong and family had planned to celebrate it with her. Unfortunately, Puan Lim passed away last week.
Mr. Ong and Puan Lim’s sufferings have finally ended. Nevertheless, it is sad to see a union of 2 childhood sweetheart ended up in such a manner.
I never had the chance to thank her for sacrificing her time to teach us. To date I regret not doing so. Rest in peace Puan Lim.

16 thoughts on “Remembering those who have passed on..”