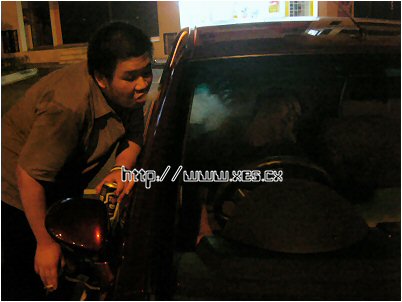 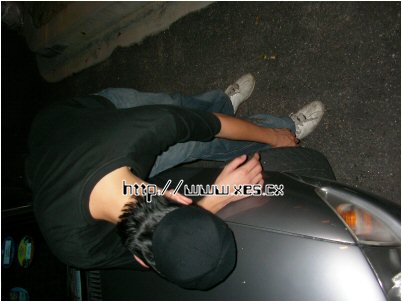 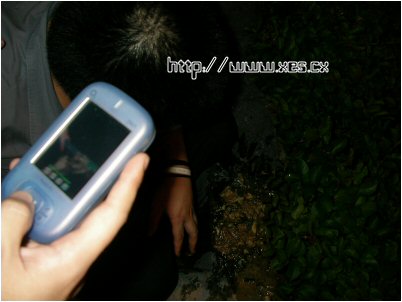 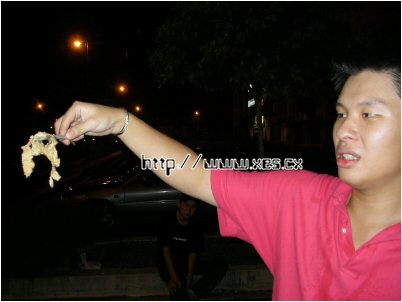 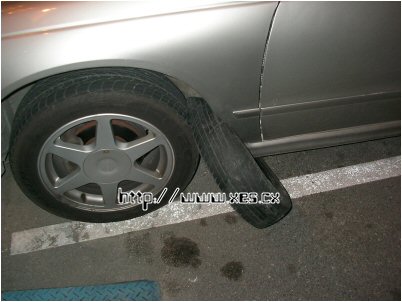 Sydney Day 1
7 August 2002 Wednesday
The journey to Sydney was awesome even though nothing spectacular has happened.

Umeng sent me off to the train station. We shook hands and then I said, “I will see you soon”.

I stood beside a drunkard throughout the whole train ride to Robina (the station that I’m supposed to take my bus). He kept on talking non-stop. I dozed off couple of times throughout the journey to the train station but sometimes awaken by slight bumps or noises.

I felt totally lost in Robina. I have no idea where my bus is. After wandering for more than ½ hour, a lady bus driver came up to me and requested for my ticket (yay!). I am on my second step for my Aussie-backpacking trip!

I read some magazines and slept in the bus. Everything outside was pitch black except for the crowded stars in the sky. The bus wasn’t packed at all and everyone was silent (except for a noisy brat sitting behind me). However, there was once the bus driver stopped the bus and walked to my seat. She shouted “Sir, I have told you not to consume alcohol on the bus! Now I have a right to ask you to get out from the bus!” It seems that a father of the noisy brat had been drinking beer. He shrugged and refused to leave. After few moments of tension, the lady driver decided to let him go.

The train to Sydney was horrible. Ugly fixtures, smelly toilet and couch filled with senior citizens. The elderly couple behind me kept on burping while the one besides me kept on coughing. Despite that, the seats were comfortable, I slept like a baby throughout the whole 14 hours journey! The elder man beside me was sleeping throughout the journey too but thank god he snored quietly. I only spoke to him once but it was during the end of the journey. “Don’t ever touch drugs, keep away from anyone who does it, I always tell my children and grandchildren this, I’m very strict just like the army, I was a major in the army for 54 years” said the old man. He has declining hearing thus I had problem talking to him. There was once I had to repeat my question 3 times but yet he still couldn’t get my question. He showed me a torchlight that his wife gave him before she died. He told me that he would be staying with his daughter because he’s sick (hopefully he doesn’t die there). With the overnight coughing and declining hearing, no doubt he is sick. He wished me a safe journey before we depart. 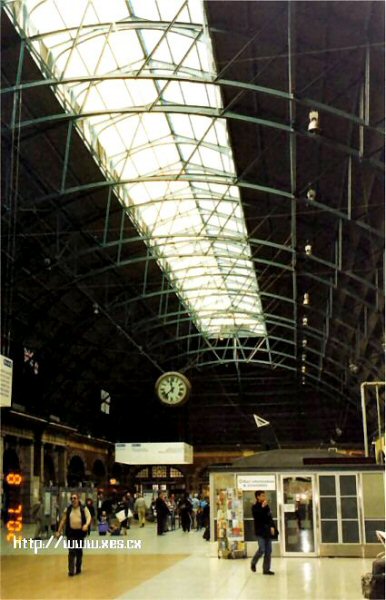 Sydney is a city of high skyscrapers and ancient old building. It used to home of English criminals until the British government stopped sending criminals there (due to the high cost). Then the influx of English settlers begins and in 1852 Sydney is proclaimed as a city.

We had lunch at a Japanese restaurant. It serves dirt cheap and delicious una-don (eel rice) for $6 (it usually cost $10). I’m staying with Timothy and Ka Bien at a 40+ stories apartment called Princeton. Not wanting to waste time, as soon as I bathed, we headed to Queen Victoria Building. A shopping centre build in 1898, its structure is Victorian design based. It is home to a large number of clothing and jewellery stores, with lower levels devoted to food outlets, from Asian cuisine to French. Furthermore, it has also devoted small sections to history. It has a huge ancient Chinese emperor Jade carriage and also few English Royal jewelleries. 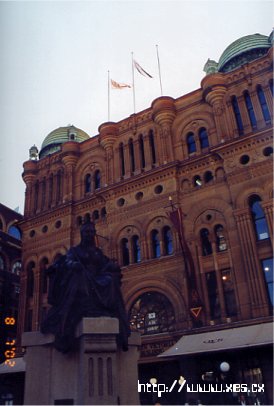 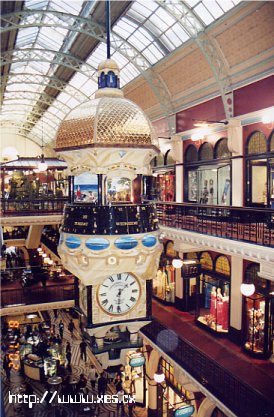 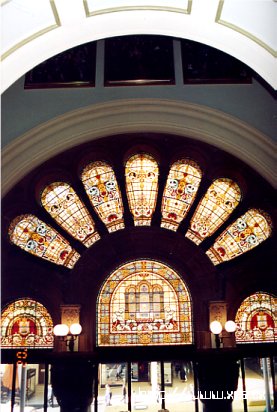 Our next destination was Sydney Opera House and Sydney Harbour Bridge. The weather was great; the sun was shining with cool wind breezing, we couldn’t resist taking loads of photos. Sydney Opera House is elegantly gorgeous from afar. However, when we descended the stairs towards the building, the ever-shining pearly wall was just combination of small square white blocks. 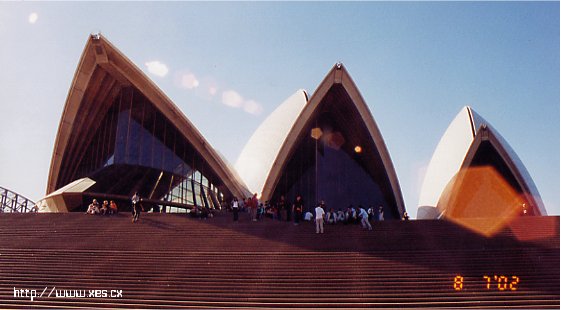 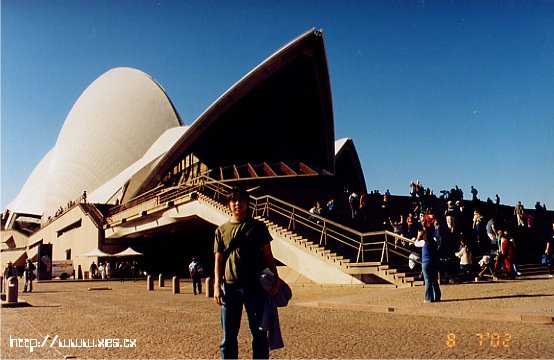 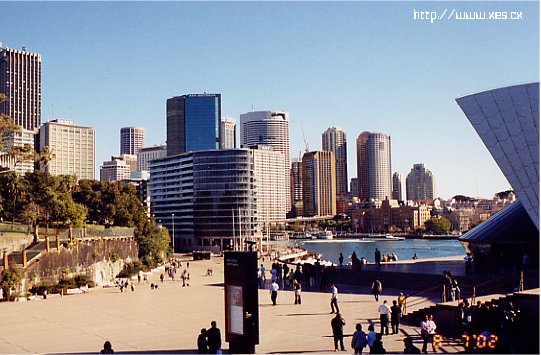 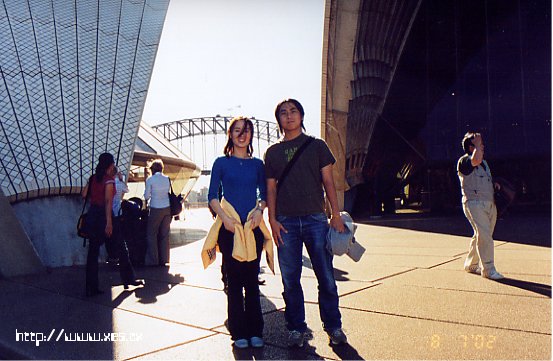 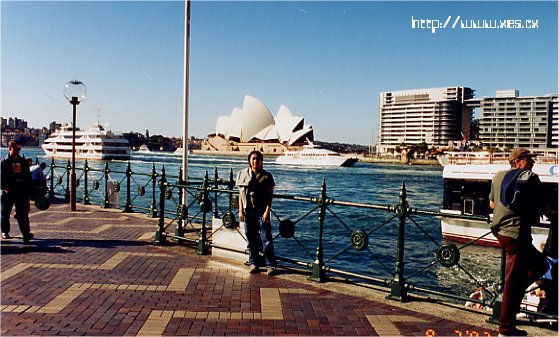 Bondi Beach was next. The beach isn’t a long stretch. The two ends of the beach could be seen with the naked eye. The beach wasn’t crowded at all. Timothy and I took a stroll along the beach. The sand was cold and the water was even colder but it did not stop the fanatic surfers. We rested on the huge stone stairs admiring a model posing for some photo shoot. There was this perverted looking Chinese man snapping pictures of the model behind the real photographer. The blonde model was dressed in skimpy short blouse. I couldn’t resist snapping a photo of her. 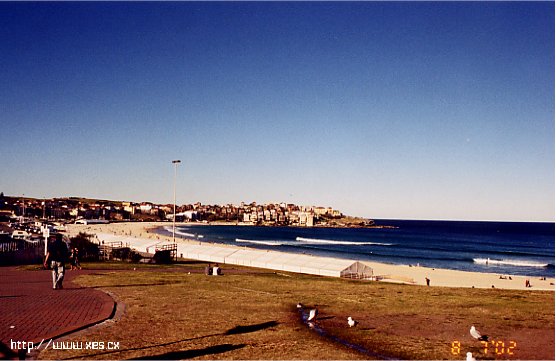 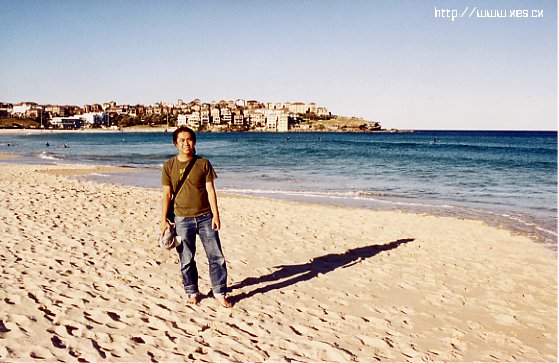 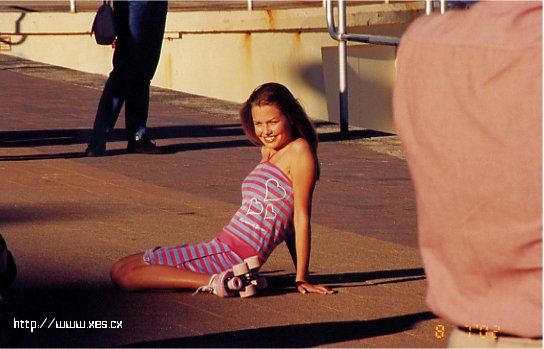 Model and perverted man on the right

Jin Han told me about the fried mars bar he tried at Bondi beach. I asked Timothy to bring me to the shop. The place is called Bondi Surfer Seafood. It’s a fish and chips shop actually but it seems that the fried Mars bar is their speciality. The mars bar is dipped into flour; deep-fried until batter; sprinkled with fine sugar. 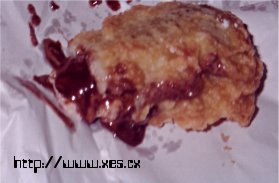 It looks like the fish in fish and chips. But when the first bite is taken, melted caramel will ooze out. Lovely!!

We headed home after that. Timothy had a look at my 700++ scanned photos collection. It took him more than an hour for him to browse through everything.

We had dinner at a place called Thainaland. We were greeted with “sawadee kap” and we replied with “sawadee kap”. As soon as we sat down, the waitress handed us a menu written in Thai. Seems like she has mistaken us for Thai because we replied her “sawadee-kap”. The food was absolutely delicious. Their tom-yam and duck noodles were great!
After dinner, we went to Darling harbour. According to them, it is where the nightlife is but it seems dull to me. We walked around it and headed home next.

Sydney Day 2
Timothy and Ka Bien had classes this morning. I had to meet up with them at their faculty. Timothy introduced his friends to me, Bob (she’s a girl, her real name is Cheng Wei) and Lui Yi. We decided to have lunch in the Fish Market. It’s located next to a harbour overlooking Anzac Bridge. The seats and tables, covered by umbrellas were located outdoors. The tables and chairs were dirty, bombarded by seagull excrement. The fish market is inside an air-conditioned building. We shared a huge seafood platter (battered fish, chips, oysters, octopus, and scallops) and $10 worth of sashimi salmon (huge long block of salmon!). The drinks were outrageously expensive, $3 for a bloody bottle of Lipton ice tea. The meal was great and we ended it with cheesecakes as dessert. 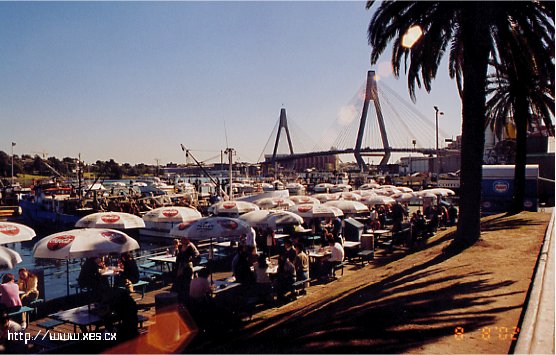 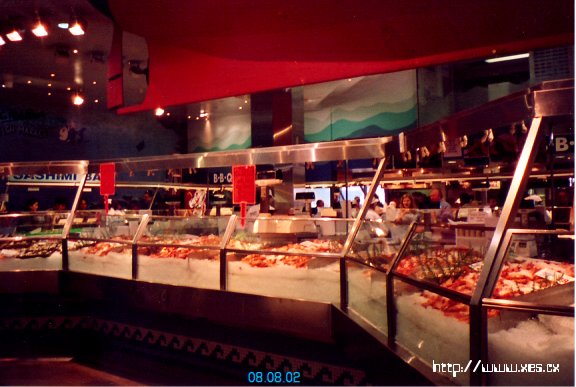 Ka Bien and the rest had to go for classes after lunch. Timothy decided to bring me around the city. We went to Hyde Park and St. Mary’s Cathedral. Nothing interesting. St. Mary Cathedral looks a bit like St. Paul’s Cathedral in Melbourne. It seems that I’ve conquered most of Sydney city’s attraction. I didn’t want to shop or gamble in the casino. 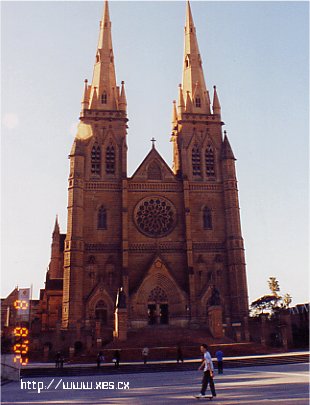 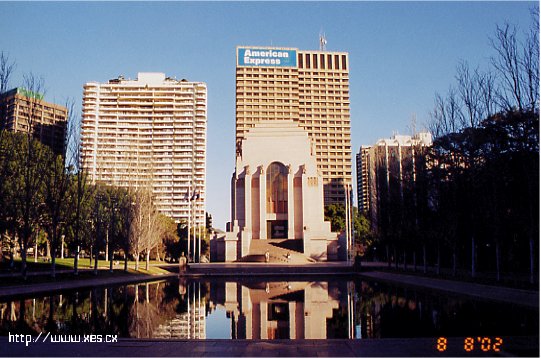 We had a lovely dinner at Chinatown. Timothy, Ka Bien and I shared a plate of steamed fish, black pepper chicken and Peking sauce pork ribs. Their portions are extremely huge. Their single bowl of rice is equivalent to 3 bowl of usual portion! I had a bowl and a half (Ka Bien gave more than half of her portion to Timothy and me). Timothy and I barely finished the dinner and we were extremely full throughout the night. However, we decided to get some alcohol. I got myself a bottle of Midori illusion. We walked around the city while holding a bottle of alcohol each before heading home. 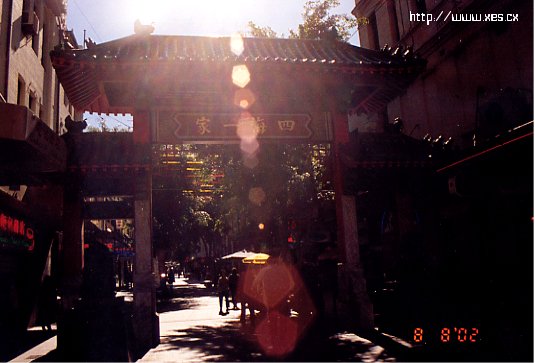 Day 3
I left Sydney in a hurry. My stuff wasn’t properly packed and Timothy had to go for classes. Ka Bian served me a piece of chocolate mud cake for breakfast. I had to finish it within seconds. The train station is just few blocks away from Timothy’s apartment. But with my heavy backpack (about 17kgs), it gave me a horrible backache.
The train to Canberra takes roughly 4 hours. The scenic view wasn’t that great. All I could see were just houses and highways.
– 4:57PM