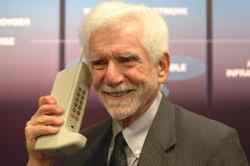 Dr Martin Cooper with the first mobile phone that he invented

It was April 3, 1973. Richard Nixon was in power, Elton John was top
of the pop charts and a bloke by the name of Martin Cooper was about
to make a phone call that would change the world.

and he had just developed the world’s first “hand-held cellular
telephone”.

“It was huge,” recalls Cooper, who was in Sydney this week to address
a communications conference.

“The phone weighed almost two kilos – it was about the size of a
brick.” If that sounds prehistoric, so too was the phone’s power
efficiency.

“The battery lasted somewhere between 10 and 20 minutes. But that
didn’t matter very much because you could only hold it up to your ear
for 10 minutes before your arm got tired,” he says.

Cooper knew the first call he ever made on that state-of-the-art phone
would be a moment of history.

So who did he call on that April day from a Manhattan street corner?
He rang the communications Joel Engel, the head of research at Bell
Labs, an arms of the telecommunications giant AT&T – Motorola’s direct
competitor – to let them know he had beaten them in the race to make
the first mobile phone.

“It was one of the more chilling conversations that I’ve ever held.
These people at AT&T could not understand how a little upstart, a tiny
company like Motorola, would dare to tell them, the largest company in
the world, how to run their business.

“I thought I heard some gnashing of teeth in the background,” jokes
Cooper.

At the time, the thought millions of people around the world owning
their own mobile seemed like a pipe dream to Cooper.

“Keep in mind that the first [mobile] telephone cost millions of
dollars to make. Ten years later we produced the first commercial
phones and those phones sold for US$4000 [$A5180], which would be
closer to US$10,000 or US$15,000 today.

“So the idea of having a billion and a half people having cell phones
– some of which are literally given to them for nothing – was a really
long reach.”

And is there ever a time when the man who made the mobile wants to
tell mobile phone users to shut up?

“It depends whether they are being rude or not. If they’re talking quietly and they are benefiting from that phone call, I feel very
proud because I think people’s lives have been improved.”

4 thoughts on “The man who invented mobile phone”