Once again, the throat cutting day. I’m sure many couples had a blast on Valentine’s Day. To the single guys who didn’t have a date on Valentine’s Day, I dedicate this song to you. Last year, www.xes.cx held an Valentine’s Day song dedication. Unfortunately, this year I was so busy until I totally forgot about it.
Recently, the Star Newspaper reported that an Ad exec stuns girlfriend with RM54,000 marriage proposal in Malaysia. Here’s the report.

Friday February 15, 2008
Ad exec stuns girlfriend with RM54,000 marriage proposal
By CHOONG MEK ZHIN
PETALING JAYA: For this Valentine’s Day, businesswoman Kelly Tan E Li got an unexpected marriage proposal.
It was “wrapped” in a RM14,000 diamond ring and a huge billboard advertisement in which her boyfriend publicly declared his intentions. 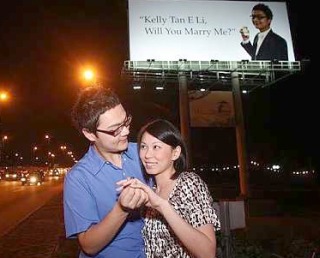 Billboard proposal: Ad man David Tan came up with a unique marriage proposal. He spent RM40,000 on a billboard and RM14,000 on a diamond ring to pop the question to his girlfriend Kelly Tan on Valentine’s Day. – KAMARUL ARIFFIN / The Star
“This is the biggest surprise of my life. And, the whole thing started as a very normal Wednesday. We went out for dinner and my boyfriend David Tan insisted on sending me home.
“The date ended very late, close to midnight. We got talking in the car and as we drove along the LDP in Kelana Jaya, he got excited and asked me to look at an “interesting” billboard by the side of the road,” said Kelly, 24.
As David was working in an advertising firm, Kelly assumed he wanted to show her some fancy new advertisements.
“I looked and was stunned. David’s picture was on the board! And beside his picture, were the magic words ‘Kelly Tan E Li, will you marry me?’
“I was so shocked and could not speak for about 10 minutes. He finally smiled when I told him ‘yes’,” said Kelly.
And the RM40,000 billboard was not the only surprise.
Immediately after Kelly said yes, David pulled out a box and inside, was a sparkling diamond ring.
“I cannot ask for a more memorable Valentine’s Day. I really want to thank David for this unique proposal,” said Kelly, a nail salon owner in Bangsar.
David, 26, said he had planned this surprise for some time. He only wanted the best for Kelly.
The accounts executive said he deliberately proposed on Valentine’s Day so that they could remember this day with fondness in the future.
“I work in an advertising company and am always thinking out of the box to come up with new concepts and ideas. I wanted my marriage proposal to be unique,” said David.
He added that luck was definitely on his side for him to be able to book one of the billboards along the LDP, which were highly in demand.
“The fact that I managed to book one especially on Valentine’s Day is so lucky. Hopefully, our marriage will be equally amazing,” said David.
The couple met at a friend’s house during Chinese New Year three years ago and started dating six months later.
David has already started planning for the wedding.
“It should be held sometime at the end of this year or early next year.
“I cannot wait to marry Kelly. She is an amazing woman and she deserves all the attention I shower on her,” he said.

This fellow’s father print money one ah? I read one comment from a forum stating that the fellow should have just spent RM54, 000 on a orphanage and get all the kids to scream “Will you marry me??”.
Thanks David, you made us feel like cheapskates now. LOL
On another related matter, while I was driving around Jalan Kuchai Lama on Valentine’s Day. I saw a few buckets with roses placed by the road side. It’s for sale and it’s like a drive-in buy-your-flowers-here. People actually queue up to buy it! It’s RM18 per piece. 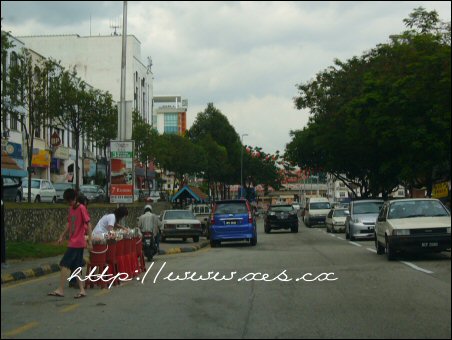 Yet another Malaysia boleh moment.