Finally the Government had decided to release the Air Polluction Index (API). IT’S ABOUT TIME LAR, DAMN IT!!! STOP BICKERING EACH OTHER ABOUT AP, AND START TELLING THE PEOPLE ABOUT THE API

choose which one more important, you damn GOVERNMENT!!!
(taken from Malay Mail)
The haze had been getting worst day by day, masks have been selling like hot cakes! 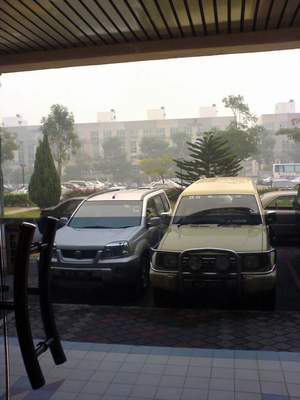 This photo was taken at about 12pm. The visibility level was acceptable but the air was totally unbreathable. I felt dizzy and drowsy just standing outside there for one min.
My boss decided to buy us lunch since all his meeting was cancel due to the haze. But, none of us feel like going out so we order Pizza Hut instead. The bloody pizza took one hour to come, contrary to their promise of 30 mins delivery. So, my master, the self proclaim Pizza Hut Most Valuable Customer, called the Pizza Hut,
“Hello Pizza Hut, your people mana (where), pengsan (faint) on the road kah?”
“No sir, we are busy that is why we will be late.”
“Busy ar? That mean you don’t need our business lar. So we cancel lar.”
“No sir, our man is on the way”
“but he is 30 mins late. If he pengsan on the road, you tell me lar. I understand one. I go tarpau (order take away) something else lar.”
“eeer…that one i don’t know. I will get the branch in charge to call you back.”
The moment my master put down the phone, the Pizza Hut man show up at the doorstep, looking as if he was gonna faint.
Haze not only make people feel drowsy, some became dumber because of it. The newspaper man came to collect his fee at our office,my clerk asked him how much is the charge.
“eeeer…i lupa lar (i forgot)
and he is the boss!!! How can you forgot!!! 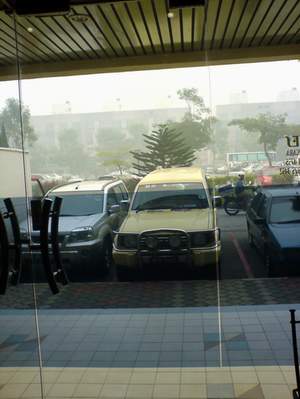 This photo at 5pm. ooooh no, the visibiltiy so bad..i can’t see my car from the reception area. 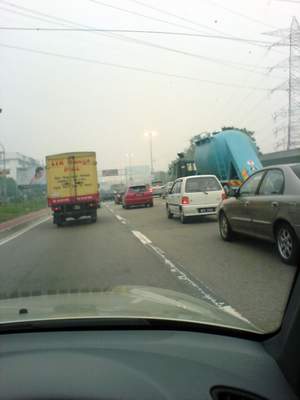 On the way back, the street lights were turn on early at LDP. The jam started early also or was it because people were driving very slowly. So slow that i even had time to take photo…or was i driving too slow…hmmmmm…?
Haze can actually make a person…slow too.