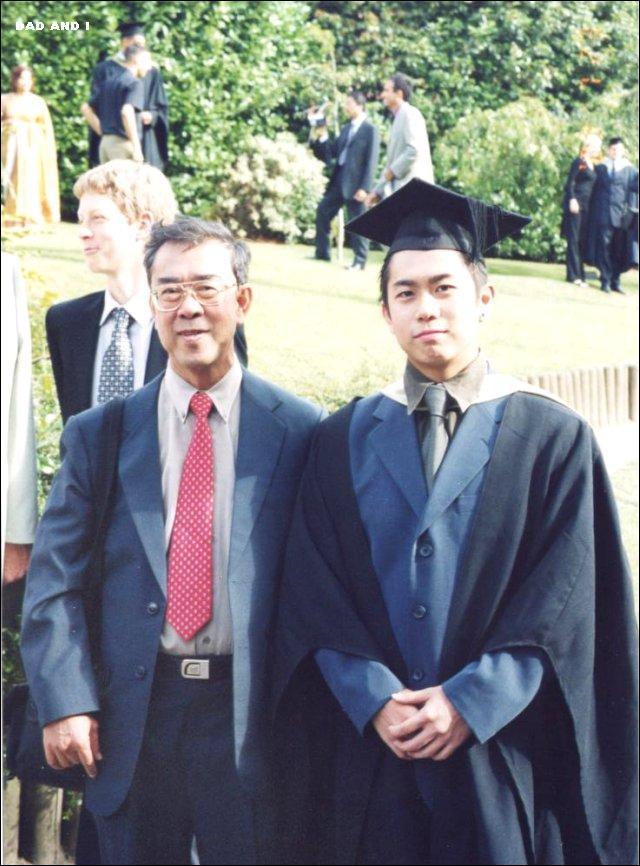 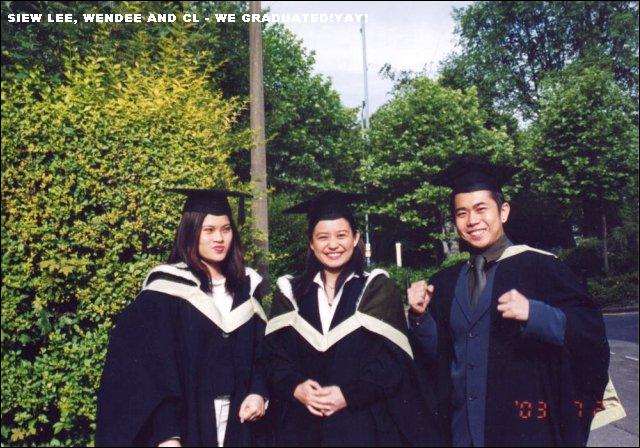 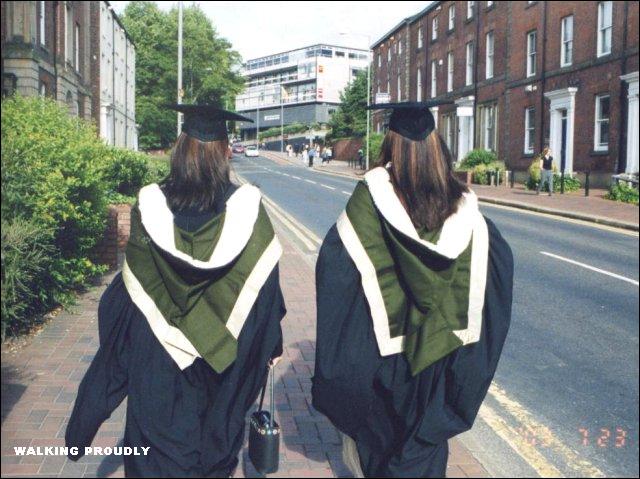 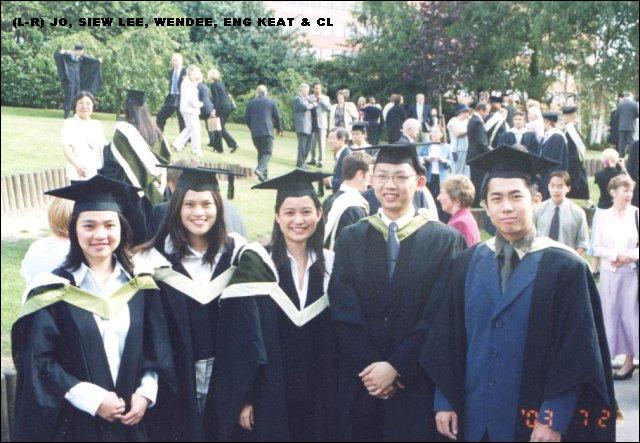 Octagon Centre was crowded with soon to be graduates and their parents, relatives and friends. Everyone was smiling happily as the camera flashes onto everyone’s face. Everyone grabbed anyone they knew to take photos together.

By 9:30AM, we proceeded into Octagon Centre. The soon to be graduates sat on the middle while guests are seated on the spectator’s stand. But the event was uber boring. For half an hour we were subjected to torturous traditional organ pieces. I sat around a bunch of locals who I’ve never seen in my life throughout my entire 2 years stay in Sheffield.

The convocation ceremony was entirely procedural. The big shots walked into the hall while everyone stood up, we lined up to get our certificates by getting on to the stage one by one and lastly, the event ends after a short speech by the Dean and Vice Chancellor. Sadly, there wasn’t any hat throwing ceremony.

Good news
I got my luggage back from Watson 16! Screw Robert Neal! We had a short chat with the new tenants. They were pretty nice. In the beginning we thought they are going to screw us for the mess we created but thank god they didn’t know anything about it. Khai Fei had to scout the house before we head back to Watson 16. Initially we were worried that no one will be there to open the door for us. Fortunately, the new tenants moved in hence we had no problem gaining entry. However, we had problem moving my stuff out from the house, as it was too heavy. I found out that I packed canned food, packets of Milo and loads of useless stuff inside. CM, Siew Lee and Wen Dee helped me to move my things. Thanks guys. 😀

Tuesday
London was great! I met up with Daniel and Ka Bien. Daniel accompanied Dad and I to the British Museum and we met up with Ka Bien for dinner. Dad didn’t join us for dinner cause he had jet lag and had to sleep early.

The hotel we stayed was amazingly huge. Our floor itself has already 400 rooms. But dad complained the room doesn’t have aircon. We had to open the window and expose ourselves to the noisy traffic outside.

We set off to the British Museum as soon as we got in to the hotel and met Daniel there. The entrance was free but 3 pounds can be given as a token of appreciation. Hmph, I wouldn’t pay a single cent to see a display of stolen good (VCD is an exception of course). 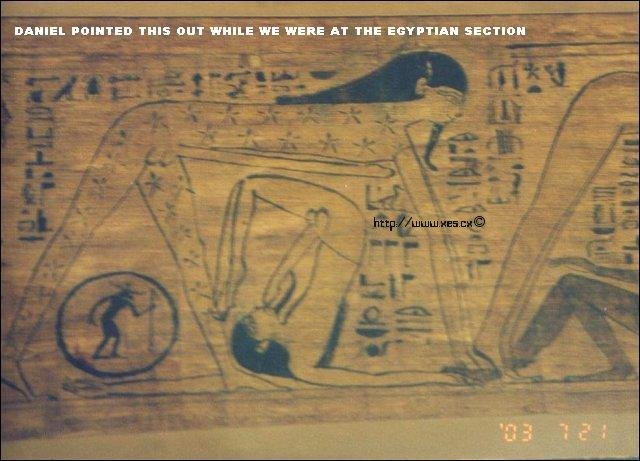 Our main attraction was the Greek and Rome, Egyptian, Chinese and South East Asia section. The Greek and Rome section, oh boy, it’s superbly boring. It’s all about statutes, this god that god, stones and philosophical shits. The Egyptian section was ten times better even though the display of dead bodies was pretty morbid. However, the Egyptian considers death as a pathway to another life hence bodies are preserved so that they could reenter their body in the future. Chinese section on the other hand focused on wealth. There were loads of royal artifacts stolen from the Imperial palace during the Ching dynasty. As for the South East Asia section, I don’t remember what I saw there. I couldn’t find anything about Malaysia. Hence there you are, Greek and Rome section about life and art, Egypt about death and Chinese about wealth.

Harrods
Daniel brought me to Harrods shopping centre, one of the most expensive shopping centre in UK. I bought a tie for my convocation. It costs me 15 quid and that the cheapest I could get. Harrods is pretty strict as ‘please do not take pictures’, ‘please do not stand here’ and ‘please carry your bags’ were heard in Harrods. But there’s one section that we could take photos. It’s the Princess Diana and Dodi shrine. Picture of Diana and Dodi were put side by side with 2 cups on the table. Apparently, the cups were left as they were after their last meal.

The place was so big that we couldn’t finish walking it.

Encounter with the famous (finally)
Guess whom I saw in Leicester Square’ Claire Danes in black silky dress, Kristanna Loken in pink and Mr. Arnold Schwarzenegger! There were loads of people crowding around Odeon. Apparently it was the premier of Terminator 3. The atmosphere was pretty hype up as we waited for the trio to appear. As the trio walked out to the balcony, people screamed in excitement. The kid next to me kept on shouting ‘Arnold Schwarzenegger!’ Kristina Loken is damn tall. She’s even taller than Arnie (probably by a head). I could see her head popping up from a crowd, as she was the tallest in the crowd. Oh yeah, she doesn’t look gorgeous in real life. The trio gave a short speech and I remember Arnie saying, ‘I’ll be back’ once. The director of Terminator 3 gave a reluctant short speech as well after Arnie pushed the mike to him.

Unfortunately, Daniel missed the event cause he had a little problem in the train station.

Day II
Encounter with Japanese
While we were waiting for the river cruise ticket counter to open, Dad made me talk to a group of Japanese. He wanted me to ask them to ask them to take a picture for us. It took me a while to recall the Japanese that I have learnt 9 months ago. And it went,

Me: sumimasen, shashin o totte kudasai (Excuse me can you take a picture for us’’
Japanese man: ‘hai dozo’ (sure)
(Picture taken, Dad and I posed on the walkway of River Thames)

Me: Arigato Gozaimasu (Thanks)
(I bowed in gratitude and walked away)

Japanese man: Ah, Doko de nihon kara ikimasu ka’ (Which part of Japanese are you from?)
Me: iie, Watashi wa Mareshia jin desu. Demo Daigaku de nihon go o bengkio shimasta. Demo watashi no nihongo wa jyouzu ja nai desu (I am Malaysian but I studied Japanese in University but my Japanese isn’t that good)
Japanese women: kirei kireii!! (I think they were assuring me that my Japanese is alright but kireii means beautiful or clean in Japanese. I guess it also means good)

Conversation went on in Japanese for a while. They kept on bombarding me with questions. I guess they felt pretty proud to find a Malaysian that could speak Japanese. The Japanese man had 2 women with him. The man is from Kyoto while one of the women is from Tokyo. I vaguely remember what they said cause they kept on asking me a lot of questions as if they were testing my language skill.

Japanese man (In a slow tone and proper Japanese (not with slang an all): Nihon ga itta koto ga arimasen ka? (Have you been to Japan?)
Me: Arimasen desu
Japanese man: Nihon ni ikitai desu ka? (Do you want to go to Japan?)
Me: Hait, ikitaii! (Yes!)
(He sounded like my Japanese lecturer)

Dad gave me a thumb up after they left. I guess the amount of money he has put into my education hasn’t gone to waste. He also advised me to speak to Japanese on the street whenever I see them.

Another encounter with language
Unfortunately, something happened just now. While I was in the computer lab, a Chinese lady in her mid forties from the opposite table, approached me. She asked,

She came over and passed me a piece of paper and asked me to translate it in Mandarin.
‘Wo kan dau ni de yin wen hen hau. Yao ni pang mang.’ (I see your English is quite good. Can you please help me’ (She saw me talking to the girl next to me, see below)

I was talking to this voluptuous Spanish pharmacist sitting next to me (Wei hai, she initiated the conversation ah). She showed me a website of a company. She was fascinated (and also laughed) at this shareholder of a major company who had no university degree qualification but a diploma holder. The shareholder was also involved in loads of public international activities which is surprisingly more than the Chairman. Now the shareholder is the President of Boeing German. She said she wants to meet up with that guy and ask him how he did it.

Back to the lady, she gave me a pen to write Chinese character. I had to explain to her that I cant write Chinese characters well and instead I tried to translate it orally. However, I failed miserably. She muttered loads of Mandarin that I couldn’t understand. I had to explain some words with actions and examples. For example, I explained the word experience with ‘experience zhiu shi heng xin ni koh lai ying kwok wan shuah (Experience is something like you come to England to play, Ha ha). She somehow got the meaning. I guess I managed to explain something to her. She thought I was from China but I had to explain to her that I’m from Malaysia and studied Malay. We chatted for a while but there were loads of words I cant say in Mandarin. I can’t even say the word “just now” in Mandarin. How shameful.

p/s sorry for the long post. haha took me few hours to type it.