Our tour package includes breakfast buffet provided by the hotel. They serve tasty bacon, ham, eggs and croissant. And today, the tour provides a quick tour to the snake farm and the gem factory.

According to Wawa, China businessmen own the snake farm. We were shown around the area and a quick briefing on snakes. Then after that, we were taken into a room and a Chinese man starts giving out in-depth details about snakes. He was speaking in Mandarin and therefore I cant get most of the things he said (yes, my Mandarin is bad). All I was able to catch are that snake organs can be used as medicines and poisonous snakes has 2 teeth while the non poisonous ones have more than 2 and therefore if someone was bitten by a snake and if there are 2 bite marks, death would be in few minutes! 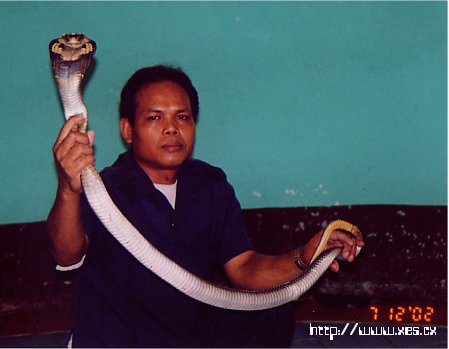 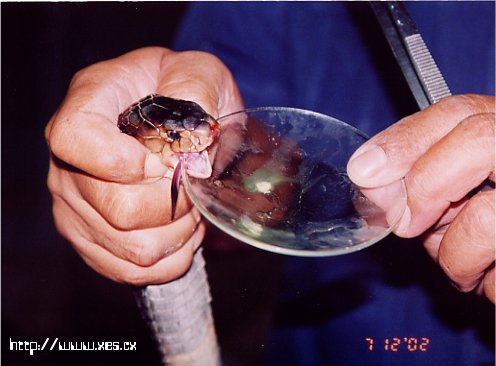 We were offered some tonic wine before the briefing. The wine is made of Chinese herbs medicines preserved in Kao Lian wine for three years and therefore good for health. However, it tasted like shit! We left as soon as the briefing finishes. Wawa was waiting for us downstairs and he offered me another horrible tonic wine.

Thailand is one of the main producers of gems in the world and produces the best gems in the world. They are graded in size, colour, shape and rarity. We were brought into a small room with few workers constructing gems and jeweleries. And after that, they brought us to the other side of the building where they sell jewelleries. Guides were provided and they’ll give brief explanation to us. However, they are very pesky sometimes. Our guide kept on pestering Melody to buy something. She was very polite and therefore we were reluctant to refuse her. We tried avoiding her and stuff but yet she did not give up.

In the end of the day, Melody bought an earring to shut her up.
It was lunch time after the gem factory and snake farm tour. Wawa brought us to Mahboonkrong (MBK) shopping centre. The shopping centre is just like other shopping centre back in KL (identical to Sg.Wang) but MBK is huge! So huge that Melody and I were exhausted even before we could finish touring the whole place! 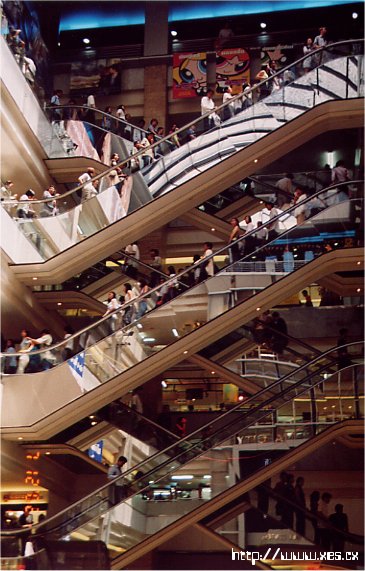 The food court is located at the fourth floor. Melody and I had delicious tom yam (40 baht, it tasted peanuty and spicy!) and beef noodles (40 bath). 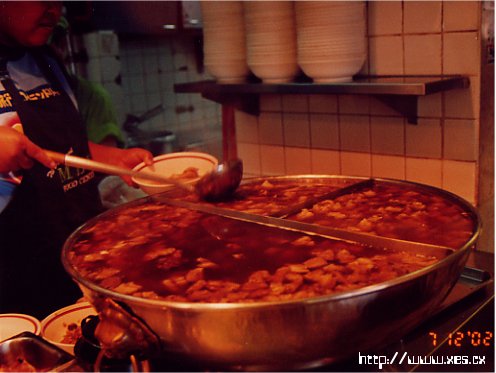 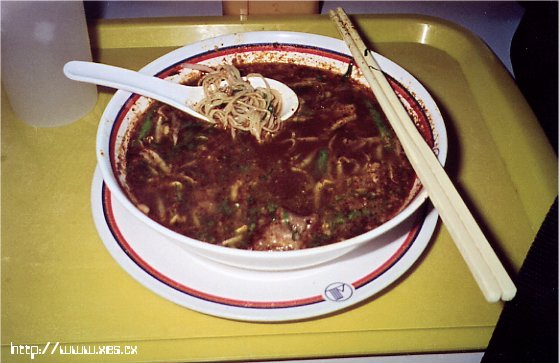 Oh, I bought myself boxing gloves for 450 baht (rm45)! We were supposed to meet Wawa at 6pm but by the time we finish lunch we still have 4 hours to go!

We decided to pay Erawan Shrine a visit. It’s a small shrine located next to the Hyatt Erawan Hotel. The 4 faced Buddha lies on the middle of the shrine. Worshippers can buy joss sticks and offerings from a counter (I paid 20 baht for 12 sticks and flowers) and place them on each of the 4 altars. 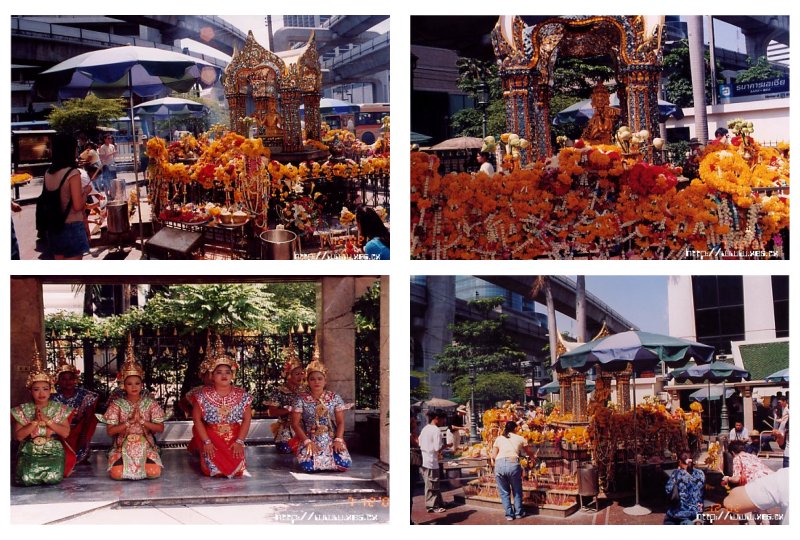 On the other side of the shrine, a group of traditional Thai dancers sit under the shades. Worshippers have to pay them to dance. It was bloody hot and we were sweating like mad while praying. We decided to loiter in Hyatt hotel and Sogo (they’re just side by side).

Bangkok has one of the most congested roads in the world. There are about 6 million people in Bangkok with 50000 taxis roaming the streets! After sitting, drinking and reading books in Sogo for hours, we decided to return back to MBK. However, the taxis refused to charge us by meter. They demanded 200 baht from us! We struck down their offers immediately. We asked a policeman for direction to MBK. According to him MBK is about 10 minutes walk. In the end of the day, Melody and I were sticky, smelly and exhausted. 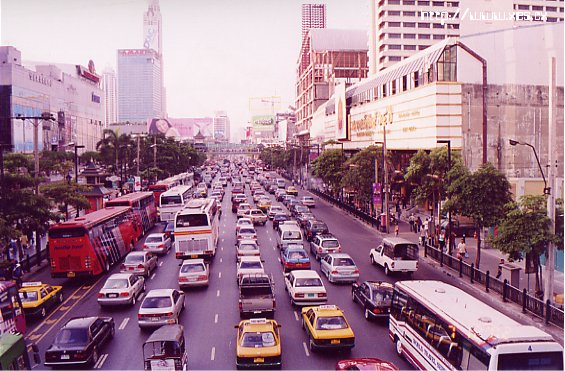 Melody’s mother sent us to the airport. I had to take a cab to her house first. I had a short chat with the taxi driver, there is quite alot of interesting stuff that you could learn from strangers. The Chinese taxi driver who doesn’t speak proper English, a man of his 40s is a fan of English songs. He used to study in a school called Mahatma Gandhi high school, a private school. The school was situated opposite the old Turf club and was filled with Indian students. He was telling me how he and his friends rush to the Turf club to gamble everyday. He was once a businessman but it failed due to the 1986 economic crisis. He ended up driving a taxi cab and years after that he bought couple of them and starts renting it to others. And now he owns a bakery business. Driving a taxi now is just to kill time for him.

We arrived at KLIA 2 hours before departure. Had a drink while waiting. The price drinks at KLIA are outrageous. A bloody fresh squeezed orange juice cost RM8.90! I spoke to a dark and distinguish middle aged Thai man. He was complaining about the service of the caf�. I started with

“Where are you from?”
“Bangkok, and you?”
“KL, I’m going to Bangkok later. Anything good to eat?”
“What do you have in mind?”
“mmm, beef and grasshoppers?
“well, beef is nice! The grasshoppers are easily available infront of shopping centres. They sell them as snacks”

He kept on talking. I wanted to leave and tried excusing myself but he just couldn’t stop talking. The last line went “Where are you staying in Bangkok?”
“I’m staying in First Hotel”
He ended with “Horrible place”

The flight was a bumpy one. The food provided by Thai airways was not bad compared to other airlines (probably tasted good cause we were hungry). However, their stewardesses aren’t that pretty but they sound really cute when they speak Thai. It took about an hour and 45 minutes.

Bangkok city is nothing special. Same scenery, super highways, traffic jams but with loads of huge billboards (Biggest I’ve ever seen!) and loads of 7-11s (I MEAN LOADS! There is one in almost every street!)
We stayed at First hotel. It might be called the First hotel because it’s one of the first hotels in Bangkok. The authority? Run down and poorly maintained! The shower is horrible. One minute it’s too hot and the next minute it’s too cold. The place is spooky.
Our tour guide, Wawa is a Thai. He talks a lot of crap but yet entertaining and friendly. Every time a girl passes by, he’ll go like oh that’s my ex girlfriend! He gave us the Thai names for young girls (okk okk), old girls (Ekk Ekk) and transvestites (Akk Akk) There was once he spoke about his background. He used to stay in Bangkok’s Chinatown but was forced to move out because of the economic recession.

“This hotel, 5 star, owned by Chinese. They control Bangkok’s business trade”, said Wawa while pointing towards a huge hotel.

Wawa is our tour guide of the 6 person group, 2 couples (including me and melody) and 2 other guys. Initially everyone was shy to talk to each other. But later on, we started to talk. The couple, William and Natalie are from KL. Natalie loves to shop and she would dump her boyfriend somewhere to shop.
– 11:59PM

what’s in bangkok? why are you going there? for vacation? and for 5 days only? wow! that’s fast.. okei.. i have way too many q’s already.. see yah!

hey yen! I’m going on a package tour, thats why it’s only 5 days. However, to be exact, it’s only 3 days! It’s due to the fact that i’m leaving Thursday night for Bangkok and Monday morning back to KL! I guess we wont have anything to do once we reach Bangkok tonight because most of the places are closed (except for Pat Pong, thats the Red Light District of Bangkok). Here are some of the recommended places to visit in Bangkok.
Wat Poh (temple)
Wat Arun (temple)
Emerald Buddha
Grand Palace
Jim Thompson’s house
Siam Square
MBK
National museum
Lumpini Boxing Stadium for Muay Thai
Snake Farm
Patpong – Red Light district and night market
Nana Entertainment
Pat Klong market aka Floating Market
Erawan Shrine
Chatukchak Market
Check out http://www.thailand.com/travel
– 1:33PM