I once mastered the art of sorta squatting and hovering my bum just above the toilet seat so as to avoid really sitting on it. You see, I am not one of those ladies who bring paper toilet seat covers along with them wherever they go, nor do I actually buy any.

A few months ago, I started getting lazy. I’d just plonk myself onto the toilet seat at the office toilet and forgetting that there’s definitely germs on the seat, right? But I was just lazy.

And occasionally, I’d find a pimple on my left bum cheek. I don’t know why but it rarely happens to my right bum cheek.

Then I witnessed how the cleaning ladies clean the office toilets. Great.

After mopping the floor, they just use the MOP to clean the toilet seats and covers, you see. EUWWWWW EUWWWWW gross!!!

Horrified, I’m back with hovering my bum above the toilet seat. But it is rather tricky when you need to poo and no doubt you’ll be working out your thigh muscles!

And if you need to take a big dump and you’re afraid people may hear your poo plonking into the water, just chuck some toilet paper in before you begin. The paper definitely muffles the sound! ;D
NB. This post would have been great with a picture demonstrating my bum hovering technique, but I was unable to have my colleague snap a picture of me in the loo, sorry!

see you here next week!

Last night, I had a strange dream. I don’t know if I can classify it as a dream or a nightmare, but it was just strange. And bad. ;(

I dreamt that I received a call from my best friend’s parents that she had passed away. I started crying and tears just streamed down my face like mini waterfalls and I started to howl like a mad woman that my family thought I was mad.

To lose someone close to me, and to be honest, probably the only girl closest to me was too painful to bear. (This pain is based in my dream, ok.)

So anyway, that same weekend, I had to attend a function with friends. (My dream is quite vague, I honestly don’t remember who I was meeting up with) It was a high tea garden party in a resort and I remember that everyone was so excited to catch up again, except me.

As I took a seat at the table and looked around, I got a shock to see my best friend sitting beside me. I freaked out inside but asked her in a whisper, “Aren’t you dead?”

The chatter around me continued but I stood up to take a walk with my best friend. We started talking. She told me how she died. I told her I couldn’t bear not knowing that she is no longer around for me.

I wanted to touch her to see whether she was real. I brushed my hand against hers and felt a slight tingle. But I didn’t dare to grab hold of her hand. She told me not to be silly, in case passer-bys think I am crazy to be gripping nothingness.

Her parents were still grieving over her but she hasn’t ‘visited’ them yet. She didn’t want to freak them out.

Anyway, when I woke up this morning, I seriously thought about her. About my friendship with other girls. About how no one really knows me like she does. About whether I should have more than one best friend or I’ll be lonely. About whether I should even tell her I dreamt of her (which I decided against it, so I’m telling you instead).

I got this from a forwarded email 😀 From the looks of it, it looks like a drawing of a kid on his understanding about love. 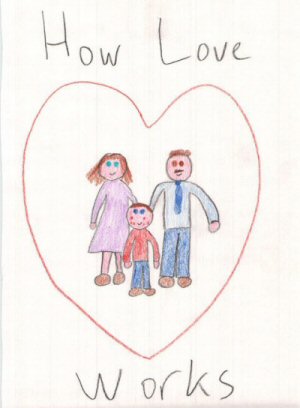 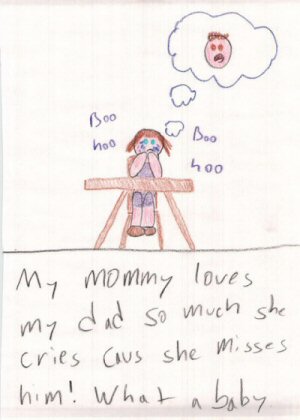 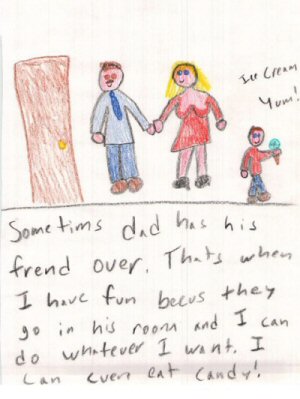 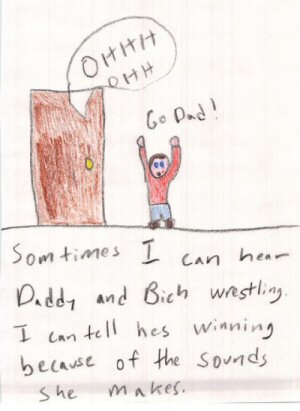 … you realise that you’ve got your panties on inside out
and back to front
on a Monday morning
and you continue to wear it like that for the whole day
til you come home.
p.s. no, there was no hint of my panties sticking out of my pants like this one here! ;P pink, w00t! pink label, indeed!

Now, does the word ‘rager’ actually exist?
If you know and have used the road to get to Plaza Mont Kiara or the Coffeebean / Baskin Robbins / SoHo at Mont Kiara Shoplex, you know that you don’t have to drive through Desa Sri Hartamas, but can take the right turn from the Penchala Link access road, right? (Okay, my description is bad, sorry!)
And you know how one lane leads you straight back to Desa Sri Hartamas and the other leads you to the places mentioned in the paragraph above, ya?
But you know how that particular lane can be rather long, due to the traffic lights during peak hours, ya?
So we have smart alecs a.k.a. idiotic drivers which brains the size of red beans who cut in right in front of the cue, ya?

When this situation happens, I really wish I had the guts to walk over to the driver’s window and smash it open, pull him out (oh I’m sure it’s ALWAYS a man!) and beat him up, and scream in his face with my saliva dripping down his eyes, tell him the next time he cuts the queue again, I will burn his house down, together with his 3 chickens, 2 dogs and Renoma briefs and stab him with a pitchfork!
And crush his balls with my stiletto heels.

This post is long overdue. In June 2008, our favourite golden arches had a Big Mac promotion – double its usual size, extra beef patties! 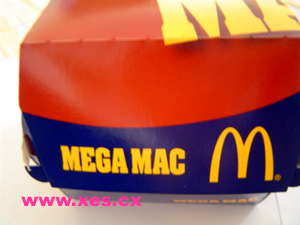 It cost ……… gee, I can’t remember now. It was all so long ago.
When I took the burger out of the box, lo and behold …

What’s this?!
Why were the extra patties …… mayo-less and cheese-less??
I felt cheated. Especially for the cost of it. It was an extra RM6 for the MegaMac value meal, ok, no joke!
I don’t really fancy my burgers ‘dry’, so I had ‘improvised’ the MegaMac.

END_OF_DOCUMENT_TOKEN_TO_BE_REPLACED

I don’t know whether the title is apt for this post, but I can’t think of anything else at the moment.

You know the situation where you’re about to step out of the lift, but the people waiting to step IN blocks your way? And there are some who go as far as getting into the lift BEFORE you even step out?
Oh-my-goodness-it-pisses-the-shit-out-of-me.

I hate it when it happens. Once, I was so irritated, especially when a fat lady with small beady eyes and looked generally rude in nature did it to me. (Ok, I was being judgmental.) I told her off, “HEY! Can’t you wait for people to get out of the lift first, Stupid??”

C’mon, I was the ONLY person in the lift, alright, and was it SO difficult to let me out first? Bloody hell.

Naturally, Stupid being stupid, didn’t hear me. Damn. Unless she pretended not to hear me.

Another time, a young lady (like me) cut the queue and got in front of me at a buffet line. Shooting daggers at her did not help, because she pretended as if there was NO line. Bloody rude, don’t you think?

Especially when there were about 20 other people behind me!

“EXCUSE ME. Aren’t you supposed to be in the back of the line? There is a queue, you know!” I remarked.

She merely turned to look at me, while plopping food on her plate and said, “Oh, sorry!”

“SORRY IS NOT ENOUGH!” I said, irritated.

She just walked away.

I was so tempted to grab some food and through at the back of her head. But all I did was yelled, “STUPID!” at her. Damn.

I don’t know about you. What would or will you do in situations like these? Let them push you around?

A friend once told me that an idiotic makcik (auntie) double parked on an already narrow street. She walked out of her car and walked towards the nearby night market. My friend was so annoyed, as it slowed down traffic, and when he bumped into her in the night market, he told her off.

“Hey, makcik. You shouldn’t have double parked your car there. It’s making the traffic jam worse,” he said in a rather polite manner.
“WHAT DO YOU WANT, STUPID????” she screamed at him. “ARE YOU STUPID OR WHAT???”

He screamed back at her, “YOU’RE THE STUPID ONE WHO’S BLOCKING TRAFFIC, YOU RUDE WOMAN!!!”

I’d probably would have done the same thing if were him!

That life is too short.
I just found out today that a friend’s friend is mourning the death of her husband.
She got married at the age of 40 about 7 months ago. She is now a widow at the age of 41.
She has never had a steady relationship before she met her husband. You could say that he was her first serious love.
Her husband died in a freak accident – he fell off the balcony of their 2 ½ storey bungalow. She had tried to hold on to him, but her grip slowly loosened and she watched him fall.
Sigh.
I’ve been hearing news of people passing on of late, that it freaks me out. So I keep telling myself that really, life is too short to be bitter and to keep grudges. It makes me want to visit my parents as much as possible, hang out with my friends, too and tell Bimboman he’d better marry me as soon as possible and stick to my side every day and night!
When I told this story to a friend, he said that there are some people who are just unlucky, and this lady could be one of them. He knew of a girl whose past 3 boyfriends had died not because of her, but of other circumstances, e.g. car accident, health reasons.