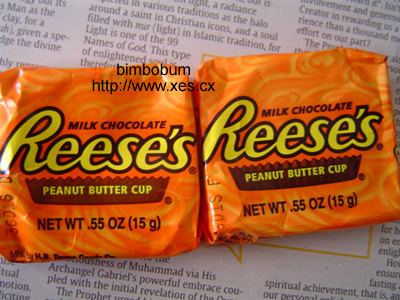 I suggested to a colleague to have her friend buy back some Reese’s Peanut Butter Cups from Australia to try. For my recommendation, she gave me 2. TWO PRECIOUS PIECES!!
*smacks lips together and drools* 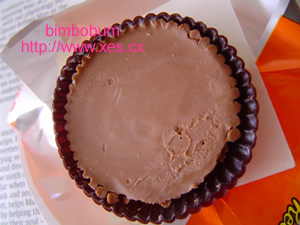 This is a Peanut Butter Cup. Yum yum….. 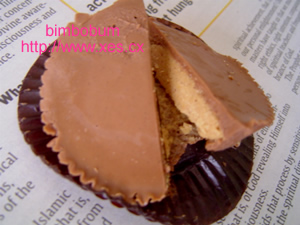 This is the inside of a Peanut Butter Cup. Yum yum….
If you love anything peanut butter, this is the peanut butter chocolate to die for…..
They love it, too!
limesodavodka
suanie
If you can get some, try them, and you’ll be wanting more of that sugar high!
*drools*
Guaranteed 5 thumbs up!
You won’t want green tea Kit Kat anymore. ;D

Despite being informed that the government had set up an independent commission to probe the controversial video clip allegedly showing a senior lawyer talking to a senior judge about appointments of judges and into the state of the Judiciary in general, the Bar Council decided to proceed with the march. In this march, the Bar Council will gather at the Palace of Justice and walk towards the Prime Ministers Office to present 2 memorandums namely to call for the establishment of a royal commission of inquiry to probe the controversial video and also a judicial appointments commission for the appointment and promotion of judges.

It was estimated that around 2000 people were present. Other than fellow lawyers, politicians from the opposition and bloggers such as JeffOoi, Rockybru, Raja Petra Kamarudin and politikus were present. 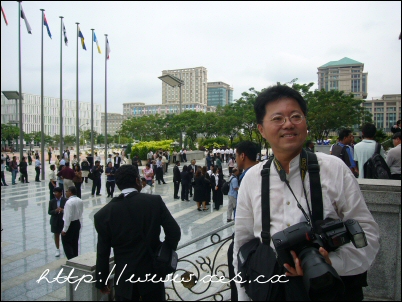 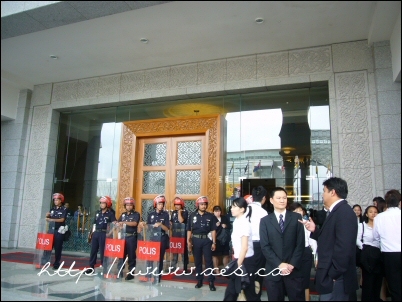 At the entrance of the Palace of Justice 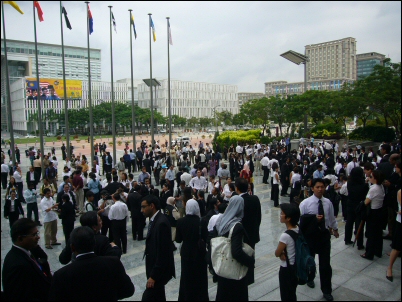 The crowd at 11AM 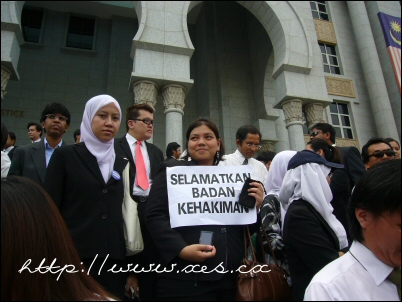 Some members of the crowd were spotted with all sorts of banners including one banner calling for the sacking of the Chief Justice – with a worn out Doraemon soft toy on top of the banner. 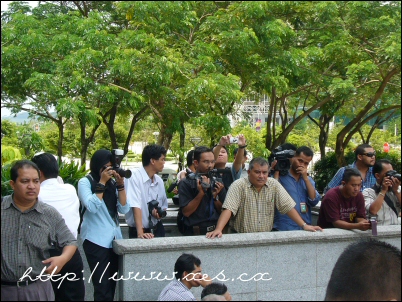 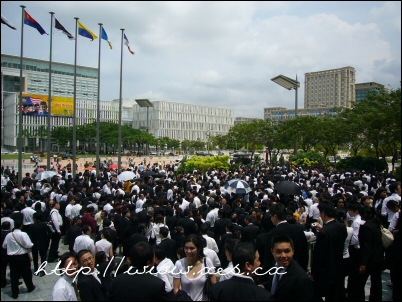 The police were there to monitor the situation and they did not interfere with the crowd in Putrajaya.

By 12PM, the crowd started marching towards the Prime Minister’s Office. For the second time in the Bar Council’s 60 years of history, such progression occurred. 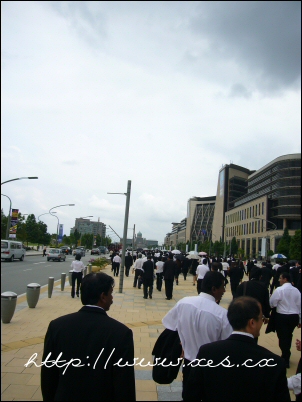 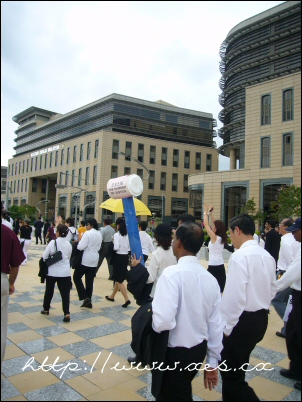 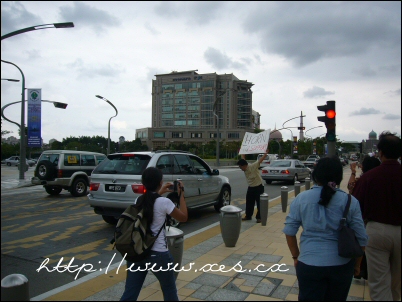 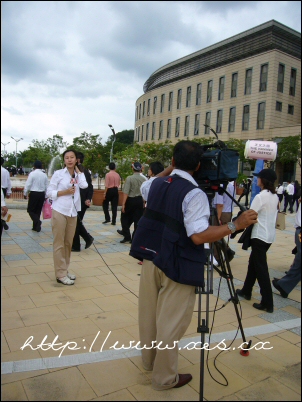 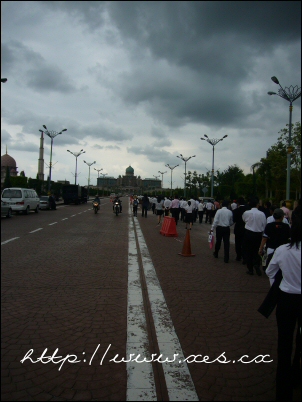 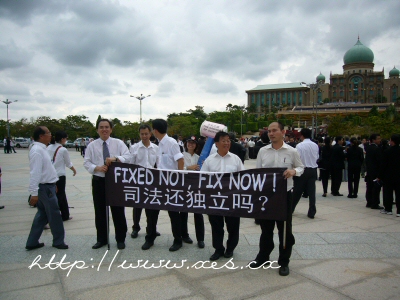 As soon as the crowd arrived at the entrance of the Prime Minister’s Office, it started pouring heavily. Some members took refuge under some shades but some braved the rain. We stood there for an hour waiting for something to happen. I was soaked from bottom to top. 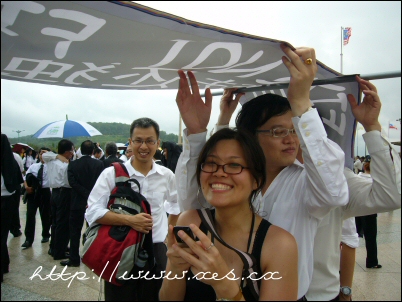 Polytikus (to tikus, will send the pictures to you soon!)

At around 1:30PM, the Bar Council office bearers announced that the memorandums have been submitted. The crowd disperse thereafter.
I rushed back to the office, grabbed my file to attend a meeting at 3PM – smelling like a fish. My pants, socks, shoes and shirt were wet! I had to apologize to my clients that I smelled like a fish.

Related Links
JeffOoi – Screenshot
Polytikus – I marched. All 8 kilometres of it 🙂
Malaysian Bar – Walk for Justice: “When lawyers walk, something must be very wrong”
Terteaforsea – WALK FOR JUSTICE – Palace of Justice to PM’s Office

Dear Diary,
Yesterday, I walked into my boss’ room to speak to him about something. He looked up and immediately bent his head low, refusing to look me in the eye.
Only after a while did I realise I had dried booger on my nose. Ugh. I blew my nose before I entered his room, you see. Yuck.
Today, I realised I had dried booger on my nose again, when my colleague stared at me in disgust as I continued chatting to her animatedly.
Why am I so pathetic? I can’t even blow my nose properly!
I am embarrassed. I should have been born a boy. ;D
Love,
Bimbobum.

Thank you for the birthday wishes. I haven’t had the time to reply to everyone’s comments. My sincere apology.

As some of you may know, the Bar Council has organised a gathering at the Palace of Justice (I just realised that the Court canceled the word “Palace of Justice” and replaced it with “Istana Kehakiman”) on 26.9.2007. The purpose of the gathering is to present a memorandum to the Prime Minister or the Deputy Prime Minister calling for the establishment of a Royal Commission of Inquiry into a video clip allegedly showing a senior lawyer talking to a senior judge about appointments of judges and into the state of the Judiciary in general.

The said video clip can be seen below – courtesy of Malaysiakini.com

Members will gather at the entrance to the Palace of Justice, Putrajaya at 10.30am on 26.9.2007 then walk from the Palace of Justice to the Prime Minister’s Office to hand over the memorandum.
The Bar Council’s aim is to gather at least 1000 lawyers. However, I foresee that the amount would exceed 1000. Further, other parties like members of the opposition parties and non governmental organisation will join the peaceful walk.

The Bar Council has arranged for 7 buses to ferry members to the Palace of Justice tomorrow morning. Please note that the buses are for members of the Bar Council and not for the public.

I too will join the walk with my fellow colleagues despite going against my personal belief on the justification of this walk. I am a member of the Bar Council and if the Bar Council calls upon their members to support, I will no doubt lend my hand to support them. 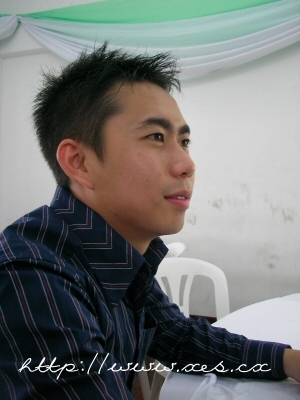 My birthday is coming up this Monday. I’ve fixed certain dates to celebrate with different group of friends. Saturday is going to be ivN, Sow and the rest, Sunday’s gonna be with A, Monday afternoon and night with colleagues and parents respectively. Next Sunday is gonna be with the old Sheffield mates!
I’m so not looking forward to it. :s
*naf Nottifish is soooo tired says:
u’re gonna go ICU this year ma FCKER!
so going to FRY IN HELL CHI BAI!
xes @ Office says:
MAHAI
BRING ME PLASTIC BAGSS!! 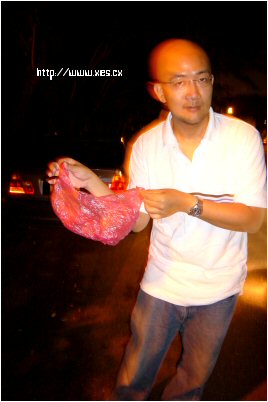 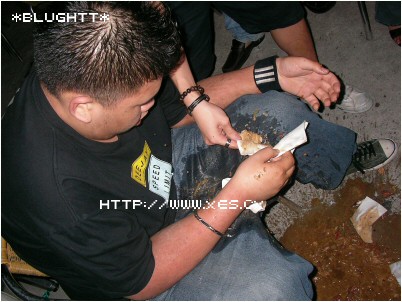 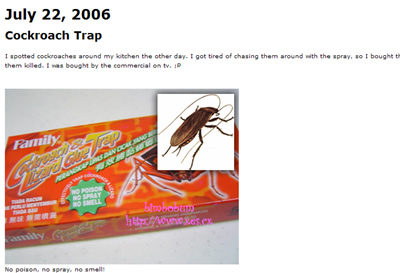 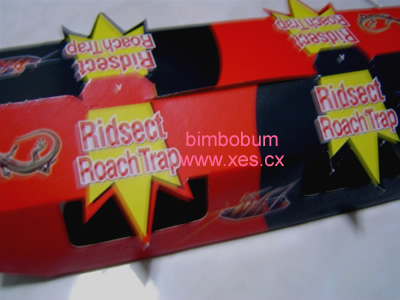 So I took Applegal‘s suggestion and tried Ridsect’s Cockroach Trap. No wonder I was cheated at first! I thought I had bought Ridsect’s but if you look at my last post, it was Family’s … perhaps it isn’t as powerful as Ridsect’s?
Tried it, and voila! 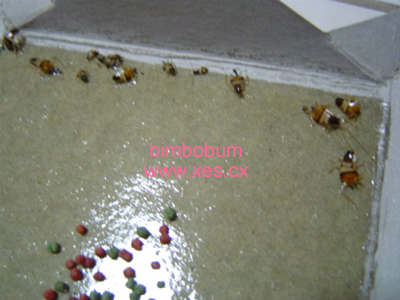 Yuck Yuck! Gross! I HATE COCKROACHES!
Why did God create them? ;(
By the way, if there are any stronger stuff, please recommend. Not super expensive ones like johnsonteoh.com previously suggested. I’m too broke to afford such super strong stuff. Don’t they have like liquid thingy that attracts cockroaches and rip their balls off and let them suffer til they die??
They are really cock roaches, i tell ya.

This month seems to be event filled. Big names are coming to town! 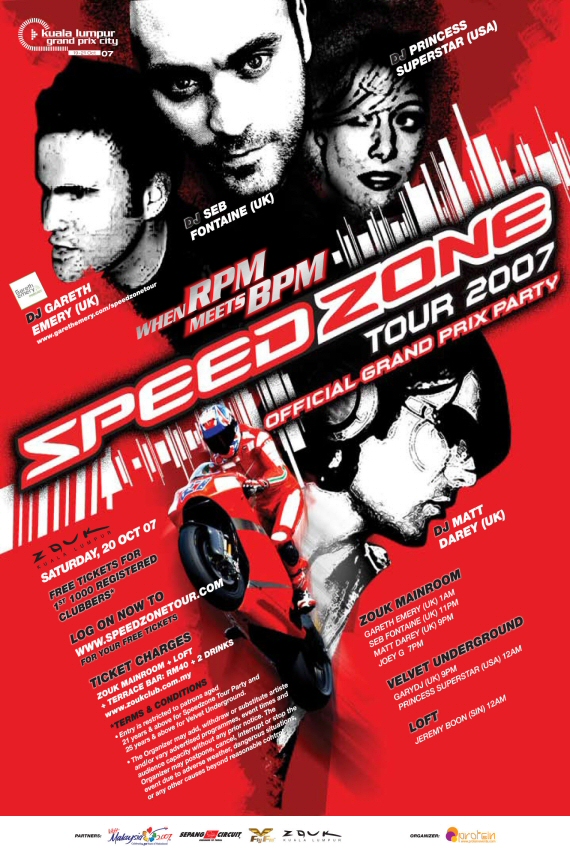 SpeedZone Tour 2007 is back, bringing with it the ultimate party blaze!
One night, one city, 7 DJs, 8 hours of non-stop action
Kuala Lumpur – Wednesday, 12 September 2007
It’s that time of the year again when Grand Prix fever grips Malaysia and the motor sport race season brings with it what every party-goer looks forward to: the blazing hot SpeedZone Tour 2007! Featuring a four-room party to be held at Zouk Mainroom, Velvet Underground, The Loft and Terrace Bar, party-goers can expect a wide array of genres performed by an international line-up of world’s top deejays SEB FONTAINE, MATT DAREY, GARETH EMERY & PRINCESS SUPERSTAR.
Now in its fifth consecutive year, SpeedZone Tour 2007 brings the experience of the circuit into the club to celebrate the heat and thrill of the 2007 Malaysian Motorcycle Grand Prix. In partnership with Sepang International Circuit (SIC), SpeedZone Tour is endorsed by the Kuala Lumpur Grand Prix City and Tourism Malaysia in celebration of Visit Malaysia Year 2007 and is proudly presented to you by Protein Event & Talent Bookings.
Come experience the ultimate party fever on 20 October 2007, at Zouk Kuala Lumpur. Catch the phenomenal DJ line-up, most of whom are making their debut appearances in Kuala Lumpur!
Zouk Mainroom: DJ Joey G of Channel [V] fame will get the party started and set the pace for UK’s favourite DJ Matt Darey, a chameleon of sound whose productions have been a major influence to the industry today. Next up is DJ Seb Fontaine who has made his mark since his residencies at CREAM and BBC Radio1. Last but not least presenting trance wonder boy Gareth Emery (ranked #34 in the DJ Mag Top 100 Poll), tipped by Paul van Dyk as the artist to breakthrough in 2007, who will take you to the finish line!
Velvet Underground: Presenting the one and only female DJ for the night, Princess Superstar who is renowned worldwide for her mash-ups between hip-hop, electro and rock. She has performed with N.E.R.D, Bjork, Z-Trip and KRS-1 and her remake of “Exceeder – Mason vs. Princess Superstar” debuted at #3 on the UK pop charts!
The Loft: Bounce to the funky house beats of GaryDJ, an accomplished DJ who has remixed tracks for the likes of Jamiroquai, Destiny’s Child and Maxwell, followed by a kaleidoscope of sounds delivered by DJ Jeremy Boon, resident DJ of Velvet Underground Singapore.
Terrace Bar: Chill out to Zouk resident DJs while taking a break from non-stop partying and try your skills at the party’s unique interactive zones.
THE official Grand Prix party of the season, SpeedZone Tour 2007 is expected to blow your mind! The organisers will be giving away 1,000 FREE tickets! Just log on and register at www.speedzonetour.com beginning 20 September 2007.
Alternatively, be as early as possible and purchase your ticket at the door for only RM40 (for Zouk Mainroom + The Loft + Terrace Bar), with two complimentary drinks. For ticket info, visit www.zoukclub.com.my.
IMPORTANT: The parties are open to partygoers 21 and above ONLY, all ticket collections and purchases will be strictly dependant on the display of a valid photo ID.
For more information on the SpeedZone Tour 2007, please log on to www.speedzonetour.com beginning 20 September 2007.

Are girls more uncaring when it comes to their cars, compared to men? Or is it the other way round?
Sometimes I think my friend is an embarrassment to women. ;D Seriously, she doesn’t seem bothered when her car is covered with mud all over!
I met up with her the other day, only to see her car almost falling apart.
“What’s this?!” I pointed to her signal light. “Go get it repaired!”
“Hehehhe,” she giggled. “No timeeeeeee! Can’t get off work early to get it repaired!”
“So, you just cellotaped it for the time being?” I asked.
“Hehehehe, YA! At least it won’t fall out and clang clang clang against the side.” she replied.
She even went ^_^ when she answered. 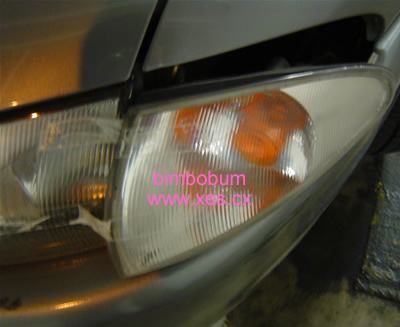 2 weeks ago, I received an email from my HR Department:

I laughed out loud upon reading it. On the next day, I received another email from the HR department.

I wonder where all these runaway maids go to when they run away. When mine ran away, she got cheated by her Bangladeshi boyfriend, dumped, had an affair with a local married man and gave birth to a child but was dumped by the married man. Tragic.

Domestic maids running away is quite common in Malaysia. So common until a local maid agency had to give an assurance that.. 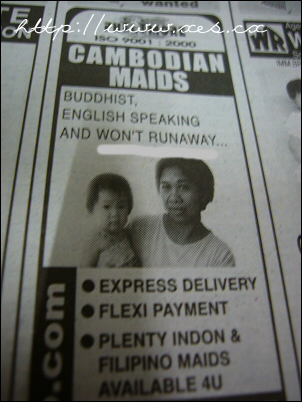 their maids wont run away.