Like Wee Kiat, I was also happily typing a post yesterday when my IE decided to close on me. BAHHH! So I shall cut short the drama of my sister and I fighting yesterday – she pissed me off I slapped her she whacked my head so I whalloped her an hour later many tears and hugs all is good now. 😛

Moving on, if you guys remember about Vivien, our resident ghost in Watson 16 – well, she has made an appearance! *insert appropriate Twilight Zone tune again* It was another typical night in the house, the guys were at the PS2 and Frank was doing some tarot card reading in the livingroom. Then someone in the room (whose name I don’t wanna reveal) suddenly became very pale, very cold and she started to cry… I noticed, so I pulled her out of the room and asked what the hell was wrong? Then she told me that she saw a figure of a young child of about 8-9 years old with shoulder-length dark hair and a fringe, wearing a flower-printed dress to her knees and socks but she couldn’t see if there were feet. The figure was standing by the entrance to the livingroom and started off rather blur but slowly got clearer bit by bit. She had no face.

We went back to the livingroom but she couldn’t see the figure anymore. She didn’t know about our Vivien story either, so she couldn’t have been making it up to entertain us. Something playing with her eyes or was there really an apparition in the livingroom that night?

Ahh yesss, Fred bought durians for us today. WHat is this I hear?? DuriaNs?? IN UK?!? 13 POUNDS EACH!?!??!?! Ok, so I thought it was kinda cool, to be eating the all-heaty durians in a cold country like UK. Apparently the durians were from somewhere in UK. I didn’t know they had any durian plantations, or a tree even, all the way here. Here’s a photo taken today with (from L-R) Alex, Fred, Mindy, Chuo Ming and the fruit. It almost looks like home!! 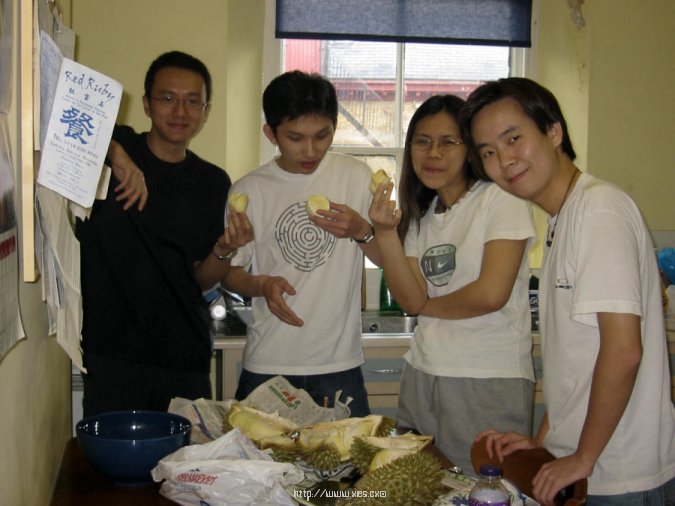 And to all who know Wei Chen, his 22nd birthday is this coming Monday!!! He claims that no one knows, that he will be celebrating it alone, blah blah blahhh… I bet he would be too busy on that day to even bother chatting with me, so suCk it in boy 😉 you are gonna have a great time.

Before I forget, to all who know my sister – guess what!!! She got herself her first boyfriend!!! WOO HOO!!! I can’t tell who it is yet, but I am really itching to…. ah well, I will get my way soon enough. Wish you two the very, very best. 😀 *HUGS*

We had a little birthday celebration for Khai Fei at Fridays. About 15 of us, took a 15 minutes cab ride to Thank God It’s Fridays just to celebrate Khai Fei’s 21st birthday. The food is outrageously expensive but their drinks were good. I had this 12 oz steak, which I ordered medium rare. Chi Der ordered the same thing too but he wanted it rare. After the food is served and while we were happily eating it, we found out that our steaks has been mixed up. One of my steaks is rare while Chii Der’s other half was medium rare.

We made Khai Fei drank a lot. Frederick bought him a bottle of Champagne and Yong Chun and gang bought him a glass of vodka lime. As soon as we reached home, Charles made him few glasses of blue lagoon. We kept forcing him to drink more and soon, right after he had his last shot of vodka, he headed straight to the toilet to puke.

I had 2 pints of beer throughout the night and felt tipsy. My threshold is getting lower and lower. I don’t like the feeling of being too drunk. Happily drunk is just perfectly fine but it happens rarely, most of the time when I drink, I’ll be fucked.

There were many occasions I was too drunk. I ended up puking everywhere namely Bangsar Alley (very memorable drinking session, 3 of my friends and I drank too much till we had to puke in the alley) and toilet bowls (my usual spot).

I gave Khai Fei a burned CD with some movies and pictures on it. Janet and her housemates gave him a FCUK sweater. There were many birthday wishes via phone calls for Khai Fei. Anyway, HAPPY 21st BIRTHDAY SIEWKHAIBEI!
– 11:50PMnote to Ben: FUCK U!!

The braids on the back of my head are falling off. I’ll make a trip down to the Saloon tomorrow afternoon to get it fixed. I feel like removing it but hell no! i just paid 20 quid for it! It should last at least 2 weeks!
– 3:00AM

Things haven’t been working well for me. Today, I bought a 5 satellites speaker for discounted price of £70. It sounds good and value for money but the only problem is my laptop doesn’t support it! The speaker requires 3 plug in sockets and all I have is just one. Therefore, only 2 of the satellites could run while the others doesn’t play at all because the cable couldn’t be plug into the laptop.

I went to Michelle’s birthday dinner at Orleans later at night. Her birthday is tomorrow but somehow we’re celebrating it today. Once again, the steak I ordered came out the way it wasn’t suppose to be. I ordered medium rare but instead they gave me an over cooked one. I complained to the waiter and all of a sudden, he ran to the other end of the table and got me a medium rare one. It was Frederick’s steak and it seemed that both of our steaks were given wrongly. To add insult to injury, Frederick eaten half of the steak already!

Many people turned out for Michelle’s dinner. 5 to 6 tables had to be combined to accommodate everybody. As usual, there were photo sessions, cake cutting and eating session and finally Michelle’s free shot of liquor. As usual again Michelle was in a state of comatose as soon as she arrived home.
– 11:59PM
Check out the new King Of Fighters 2002 videos! FUCKING ONZZ AHH!!