Few days ago, there was a report on Malaysiakini entitled “BN Sexy Girls fish for Votes”. What happen was that the governing party organised a dinner with 3 scantily clad girls singing to the crowd.

They came in droves for the dinner bash last night and the crowd of about 1,500 made up mostly of fishermen were definitely hooked.

The bait was simply irresistible. Nope. It was not the delectable spread of steam fish and herbal chicken but rather three scantily clad women.

Donning BN-blue tank-tops, hot pants with ‘fishnet’ stockings and boots, the girls sizzled the inhabitants of the Kampung Baru Sepatang fishing village with several hot Chinese numbers, including one that was aptly titled ‘shake, shake, shake’. 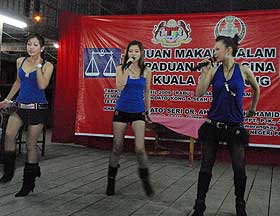 The dinner was organised by Barisan Nasional in an attempt to lure votes for the upcoming Bukit Gantang parliamentary by-election, where Chinese support is crucial.

Among the top leaders enjoying the show was Ahmad Zahid Hamidi, the newly-elected Umno vice-president and Minister in the Prime Minister’s Department in-charge of Islamic affairs.

However, the temperature increased a notch when the girls came on stage to perform before and after the BN luminaries made their speeches.

Food and hot women are not something new in BN by-election campaigns.

It was also reported that PPP had held a similar dinner on Tuesday for 50 tables, which included even sexier singers.

When pressed on whether such performances would translate into votes for BN, Ahmad Zahid said that they were a “part of the Chinese culture.”

“In my constituency, we did not win by holding such performances. However, we also respect Chinese customs. In fact, we should respect the customs of all races.

Well, I must say that scantily dressed girls dancing and singing on stage is not something new. Couple of years back in one of the night markets in Kuchai Lama, I saw one girl singing on the stage. And the performance was for the Chinese Ghost Festival -_-

There’s one part she said to a small kid, “You want to shake head??”

Yet another Malaysia Boleh moment!