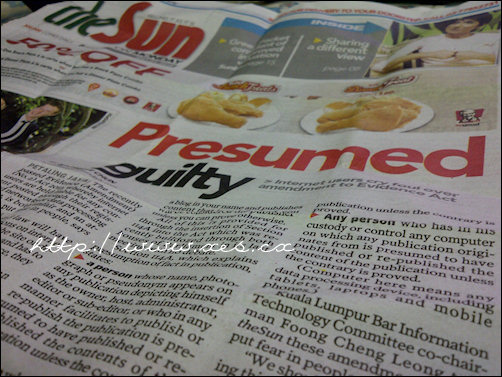 PETALING JAYA (May 20, 2012): The recently passed Evidence (Amendment) (No 2) Act 2012, whereby internet users are held liable for any content posted through their registered networks or data processing device, is both unfair and an attempt to put fear in people, says civil society.

The amended law will have serious repercussions on internet use as the owner of the site or device is presumed guilty and has to fight to prove his innocence, they say.

What this means is, if an anonymous person posts content said to be offensive on your Facebook wall, or if someone piggybacks your WiFi account and uploads a controversial document, you will be immediately deemed the publisher of the content and subject to prosecution under the relevant laws such as the Sedition Act.

Not only that, if a person starts a blog in your name and publishes content that is red-flagged, you will be considered the publisher unless you can prove otherwise.

All of this is provided for through the insertion of Section 114A into the Act which was recently bulldozed through both houses of Parliament in its last meeting with no debate.

Section 114A, which explains presumption of fact in publication, states:

– a person whose name, photograph or pseudonym appears on any publication depicting himself as the owner, host, administrator, editor or sub-editor, or who in any manner facilitates to publish or re-publish the publication is presumed to have published or re-published the contents of the publication unless the contrary is proved.

– Any person who has in his custody or control any computer on which any publication originates from is presumed to have published or re-published the content of the publication unless the contrary is proved. (Computer here means any data processing device, including tablets, laptops and mobile phones.)

“We shouldn’t even be discussing this law because it is based on the idea that one is presumed being guilty until proven innocent.

“Why does the owner of a site, or Facebook account, have to take the rap and prove his innocence while being subject to investigation and seizure of property?” he asked.

Minister in the Prime Minister’s Department Datuk Seri Nazri Abdul Aziz, while winding up the Bill in Parliament on April 18, had said the use of pseudonyms and anonymity by any party to commit cyber crimes made it difficult for action to be taken against them.

Hence, he said the Evidence Act 1950 had to be amended to address the issue of internet anonymity.

However, Internet Society Malaysian Chapter chairman Julian Vincent told theSun such amendments could be open to abuse by the investigators and force an innocent party to rebut the presumption of guilt at serious risk of wrongful prosecution and injustice.

“In the internet environment where the websites even of the largest organisations are susceptible to hacking and manipulation, it is dangerous to have this presumption in place.

“The society expresses its hope that the cabinet will revise the current text and work to address privacy considerations and protect citizens’ rights and civil liberties in any future cyber security legislation,” he said.

Centre for Independent Journalism executive officer Masjaliza Hamzah said the amendments were a definite threat to freedom of expression and media freedom.

“The amendments are clearly an indirect way to control online content as it makes online sites responsible for comments posted by readers; forget about disclaimers on the comment section.

“This may force some sites to stop the comment feature because having to vet comments themselves may become untenable, and if this happens, it has a huge impact on the interactive nature of online media favoured by readers,” she said when contacted.

A blogger known as Obefiend added such amendments would make it difficult for people to prove their innocence because everything is hackable when dealing with the online world.

“There always is ambiguous evidence when dealing with electronic presence, which makes proving you are indeed not the publisher very tough,” said the blogger, who writes on Blog Serius.

“It’s very scary and distressing to know that if somebody uses my name, I am automatically presumed guilty and have to prove my innocence,” he said.

My full article published on LoyarBurok is also produced below:-

Dissecting the presumption of fact relating to publication in the controversial new Bill.

The Evidence (Amendment) (No. 2) Bill 2012 was one of the bills rushed and passed by the Parliament recently. Minister in the Prime Minister’s Department, Datuk Seri Mohamed Nazri Aziz, when winding up the Evidence (Amendment) Bill 2012, said the use of pseudonyms or anonymity by any party to do cyber crimes had made it difficult for the action to be taken against them. Hence, the Evidence Act 1950 must be amended to address the issue of Internet anonymity.

The amendments introduced s. 114A into the Evidence Act 1950 to provide for the presumption of fact in publication in order to facilitate the identification and proving of the identity of an anonymous person involved in publication through the internet. In simple words, s. 114A introduces 3 circumstances where an Internet user is deemed to be a publisher of a content unless proven otherwise by him or her.

Although it is stated that the amendment is to cover anonymous persons on the internet, the effect of the amendment is quite wide. You see, we, especially social media network users, generally do not use our real names on the Internet. We use nicknames and pseudonyms. Our home addresses do not appear on our account. We sometimes use fictional characters or even digitalized images of ourselves as our profile picture. All these are done to protect our own privacy. So, if none of my personal details appear on my account, does this mean I am anonymous? If someone’s identity cannot be directly ascertained from his account, I would think that he would be anonymous.

Admittedly, the amendments certainly saves a lot of the investigator’s time. It is very difficult to trace someone on the Internet. It will make prosecution for, among others, defamation, offences under the Communication and Multimedia Act 1998 and Computer Crimes Act 1997 and, election offences much easier. But it is not impossible to trace someone. There are many cases where perpetrators are caught and charged.

I do not see the logic to deem someone to be a publisher. If an investigator is unable to trace the anonymous internet user, then why should the innocent Internet user take the rap? The onus of proof should always be on the prosecuting side. In the English case of Applause Store Productions Limited & Anor v Grant Raphael [2008] EWHC 1781 (QB), the claimants were awarded £22,000 in damages against Raphael, an old school friend, who had created a false personal profile of the claimants on Facebook. The claimants convinced the Court that Raphael was the person who created the fake profile even though he claimed that he had a party at his house and someone in that party created the account.

In summary, the new amendments force an innocent party to show that he is not the publisher. Victims of stolen identity or hacking would have a lot more problems to fix. Since computers can be easily manipulated and identity theft is quite rampant, it is dangerous to put the onus on internet users. An internet user will need to give an alibi that it wasn’t him. He needs to prove that he has no access to the computer at that time of publication and he needs to produce call witnesses to support his alibi.

Clearly, it is against our very fundamental principal of “innocent until proven guilty”. With general election looming, I fear this amendment will be used oppressively. Fortunately, the amendment is not in force yet. I strongly hope that the government will relook into this amendment.

Unfortunately, Datuk Seri Mohamed Nazri Aziz said that there will be no withdrawal of the amendment.

That seems to be the current unfortunate position. I am trying to find all the possible ways to engage the Government to withdraw this Bill. Please spread the message on the repercussions on this Bill.