The Star Newspaper ran an article on Freedom 08 two days after the event.

Residents of Port Dickson are unhappy that the seaside town is being used by certain quarters to promote booze, drugs and promiscuity among the young.

Port Dickson assemblyman M Ravi said a recent wild party at the seaside was a real shocker to him and the community here. He said that such parties did more damage to the young than promote tourism.
“I made a surprise visit to a so called world music event in the wee hours of Saturday morning and what I saw was shocking.

“Thousands of teenagers, many drunk and wearing skimpy clothing were misbehaving and some were even involved in substance abuse,” he claimed. 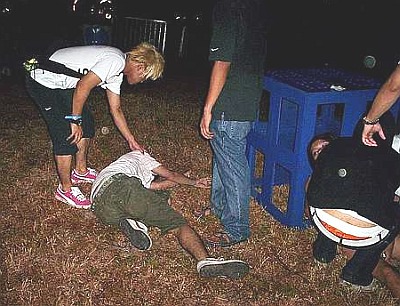 She said it also made little sense to see some female teenagers wearing swimsuits and other skimpy clothing although it was 4am.
“When I asked them if their parents knew if they were here, they shied away. Most of them are from Kuala Lumpur,” she said.

A friend of hers said it was quite a sight to see several youths lying on the ground clearly intoxicated.

“Medical people were on standby but some of the party goers were too hysterical. Beers were sold openly and some had been drinking for hours,” he said.

Ravi said the authorities should not treat the matter lightly.
“If the idea is to promote PD, then we can do without such events since it creates such a bad image,” he said

He said government departments which give out permits for such events should not “close an eye” when granting permits as this would be tantamount to endorsing social ills.

First of all, this article paints an extremely bad light on raves in Malaysia. As boob_omatic put it, “only sohais go to these kind of sohai events”. This article no doubt has caused negative effects on the public.

My group of friends and I went in free of drugs and sober. The ultimate aim was just to enjoy ourselves and meet up with friends that we’ve not seen for ages. On the 2nd day, the rave ended at 3am. Music was off and everyone was ushered out. If the patrons wants hang around the are until 4am, there is nothing the organisers can do if they are not within the perimeter of the rave. Further, there was police all over the place. They could have just asked everyone to go home. There may be bad apples that tainted this event but I personally think that it shouldn’t be a bar for raves to be held in Malaysia.

I hope they don’t ban all raves in Malaysia cause my friend Abang Fai (Fai Kor) wants to pei (trip) and he needs to do it outdoor. FAI KOR! YOU STILL GOT NEXT WEEEK!!