Recently, the vice-president of the National Islamic Students Association of Malaysia, Munirah Bahari announced in a statement that the Malaysian school uniform i.e. the white blouse is too sexy. They have encouraged students to “cover up” according to Islamic precepts to fend off social ills, including “rape, sexual harassment and even premarital sex. She said, “This leads to babies born out of wedlock and, to an extent, even prostitution,”.“Decent clothes which are not revealing can prevent and protect women from any untoward situations,” she said, suggesting that girls wear a blouse of a different colour or with an undergarment [Read more here]. 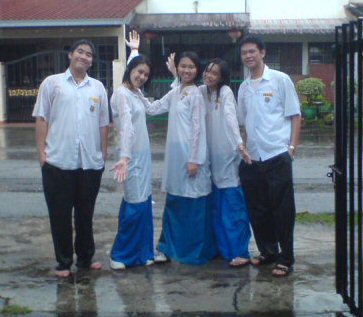 I read one entry by MichaelOoi on this issue. It cracked me big time.

The person I have in mind, is the guy who thinks school uniforms are sexy. I don’t know who is the guy (I don’t really give a shit anyway)… but, I think that guy is pretty stupid. You see, when a girl’s sexy, she’s gonna stay sexy no matter what she wears… (imagine Jessica Biel). She can wear a school uniform, a baju kurung, or even a baju hujan, it doesn’t matter. She is still going to look the same. She is going to look sexy in EVERYTHING. So, should we ban every fucking thing that Jessica’s gonna wear? The next thing we know, she’s going to be naked dude… (not that it’s a bad thing).

Same thing goes for the opposite. An ugly girl will stay ugly no matter how sexy she wears. Old people will stay old even if they wear a school uniform. And how do you explain goats? Do you people even know that hundreds of domestic animals are getting raped every year in Malaysia alone? (the farmers, goddamnnn!) Why isn’t there any nincompoops from the government propose for animals to be fully clothed already? As you probably have realized, the issue here is not about the clothing at all. It’s the mentality of the people. People are just sick enough that they’d rape anything that can satisfy their whims and fetishes.