Remember the Purina One contest I posted earlier? The results are out! Check out the press release below.

“Before I changed Bie Bie’s diet to PURINA ONE®, we were in between a few dog food brands. But now [after observing the significant improvements], we will stick to PURINA ONE®,” commented Teh after Bie Bie was announced the first prize winner. The proud owner intends to spend the prize money on Bie Bie’s future training needs.

The other two contenders were Bailey, a Beagle and Dong Dong, a Jack Russell. Bailey won the second prize while Dong Dong came in third. Second and third prize winners won RM5,000 and RM2,000 cash respectively and six months supply of PURINA ONE® products. The three finalists were judged based on five visible criteria: body condition, clear eyes, healthy skin and coat, teeth and gum health, and overall relationship between the owner and the canine. 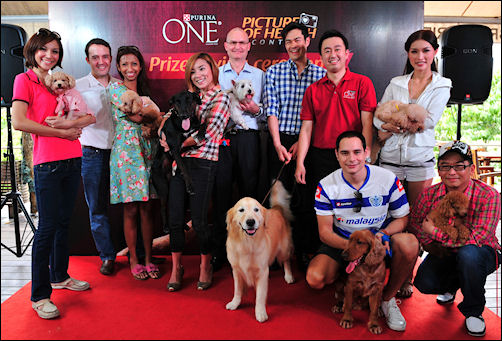 A few familiar faces from the entertainment industry were spotted at the afternoon tea with their furry friends. Angel Wong Chui Ling, the newly appointed brand ambassador for PURINA ONE® was at the event with Fatty – a mix breed of an Irish Setter and a Bull Terrier. Amber Chia, a celebrity model, attended the afternoon tea with her Golden Retriever, Poodle and Bichon Frise. David Yee, the new host of Life Inspired TV (Li TV) channel, with Tyson, a Golden Retriever in tow. Joey G, a celebrity DJ, had his hands full with Leon, a Cocker Spaniel while Alison J Victor, former radio DJ at Red FM, looked lovely with her adorable Toy Poodle, Pom Pom.

Tim Wilson, Country Business Manager in Purina addressed the crowd with Westie, a West Highland White Terrier. “Having dogs in our family is great in so many ways. People who share their lives with pets, particularly dogs, are less stressed. There is always somebody who will listen and rarely disagrees. They [our pets] provide a common focus in the family and many people tell me they believe this strengthens their family bonds.”

Angel Wong, a Hong Kong born but Malaysia based female artiste, regards Fatty as her granddaughter, an offspring from her two dogs – Lulu (a Bull Terrier) and Wallace (an Irish Setter). In her message to all dog owners, Angel remarked that, “We can have a lot of things in life. Our doggies have only us. So do give them the best.”

The Picture of Health Contest aimed to encourage dog owners to feed their dog with PURINA ONE® and observe improvements in its six signs of health: body condition (its ideal size); digestion system; skin, coat and eyes; immune system; dental health; bone and joint health. Since then, many dog owners took up the challenge and sent in their dogs’ pictures for the contest.

In the 10-week competition period, Purina received over 200 pictures of good looking and healthy pet pooches who changed their diet to PURINA ONE®. In addition to the Top 3 winners, twenty consolation prize winners have also received RM500 cash and PURINA ONE® products worth RM160 each.