While this blogger and a few other bloggers are going spend few nights in a lavish hotel in Langkawi, another blogger, Raja Petra Kamaruddin (RPK) of the well known website, Malaysia-today.net will be lavishing in jail until his trial in October 2008. He refused to post bail. 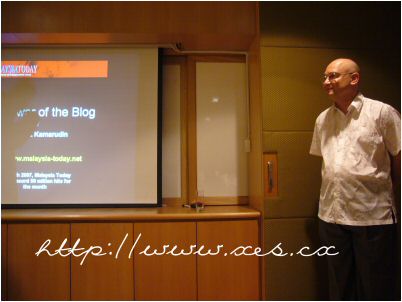 RPK was today charged under Section 4(1)(c) of the Sedition Act 1948 (“SA”) at the Petaling Jaya Sessions Court over an article which he wrote in his website entitled “Let’s send the Altantuya murderers to hell“. He claimed that the charges are politically motivated.
Section 2 of the SA defines “seditious” as “when applied to or used in respect of any act, speech, words, publication or other thing qualifies the act, speech, words, publication or other thing as one having a seditious tendency”
Seditious tendency is defined in Section 3 of the SA as:

3. Seditious tendency.
(1) A “seditious tendency” is a tendency –
(a) to bring into hatred or contempt or to excite disaffection against any Ruler or against any Government;
(b) to excite the subjects of any Ruler or the inhabitants of any territory governed by any Government to attempt to procure in the territory of the Ruler or governed by the Government, the alteration, otherwise than by lawful means, of any matter as by law established;
(c) to bring into hatred or contempt or to excite disaffection against the administration of justice in Malaysia or in any State;
(d) to raise discontent or disaffection amongst the subjects of the Yang di-Pertuan Agong or of the Ruler of any State or amongst the inhabitants of Malaysia or of any State;
(e) to promote feelings of ill-will and hostility between different races or classes of the population of Malaysia; or
(f) to question any matter, right, status, position, privilege, sovereignty or prerogative established or protected by the provisions of Part III of the Federal Constitution or Article 152, 153 or 181 of the Federal Constitution.

Under Section 4 of SA, any person who:
(a) does or attempts to do, or makes any preparation to do, or conspires with any person to do, any act which has or which would, if done, have a seditious tendency;
(b) utters any seditious words;
(c) prints, publishes, sells, offers for sale, distributes or reproduces any seditious publication; or
(d) imports any seditious publication,
shall be guilty of an offence and shall, on conviction, be, among others, liable for a first offence to a fine not exceeding five thousand ringgit (RM5000) or to imprisonment for a term not exceeding three (3) years or to both.
In light that the trial is fixed in October 2008, I shall refrain from making any comments on this matter but I wish RPK all the best.
Related Links:
Raja Petra charged with sedition
Raja Petra charged, chooses jail over bail