As at 4.30am, 8 May 2009, they are being held overnight and may be remanded further or charged later in the day. The police have denied access to counsel and family, and despite repeated requests, have refused to provide further details as to their next course of action.

I was disgusted. It was clearly an abuse of power. How can the police arrest lawyers who were there to give assistance to detainees? We are empowered by the law to do so!

The notice to gather was rather short. It was early in the morning and most of lawyers haven’t check their emails. (A mass email was sent out too).

Immediately after my matter at Court, I headed to the foyer to meet up with other fellow lawyers. The response was low initially. But the numbers begin to swell and had around 200 lawyers later in the day. This is not inclusive of those who had came for a while. Reminds me of my high school days..peeekkk yaaauuu arrr!

Couple of police officers came to the foyer to keep an eye on us. But gathering was rather uneventful. 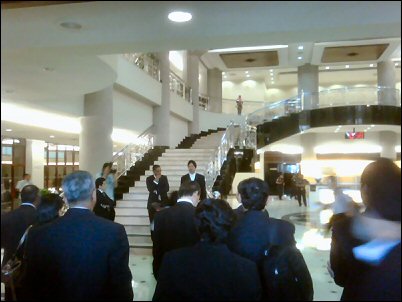 Earlier in the morning…

We waited and waited for the lawyers to appear in Court. The Bar Council Chairman and the Selangor Bar Chairman gave a speech to all of us but it was cut short by the police.

Fortunately, by 3pm, the lawyers were released without charge. It was a huge relieve for us.

Video on how the incident unfolded.

The Bar Council will be holding an EGM on the 15 May to condemn what has happened. I hope something good will turn out from there.