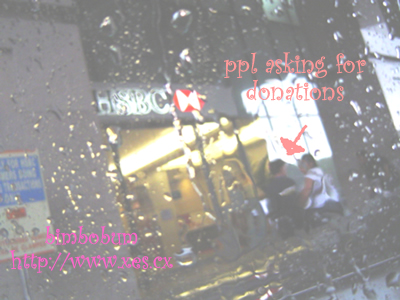 girls: miss, would you like to make a donation for the old people?
me: *grunts and continues walking in to the bank*
after i sorted out my banking, did i only make a donation. i felt bad because it was raining, but it annoyed me that they chose to stand right in front of the bank to ask for donation. now who taught them to do that? 2 girls were asking for donation from bank customers while a guy friend was leaning against the pillar (on the right of the picture). see how they seem to be waiting to pounce on customers who exit the bank? ;(
it reminded me of england, where the homeless would sit at least 2 feet away from the ATM machine, asking, “could you spare some change, please…” or the likes of it. my friends were puzzled with their audacity to sit soooooo close to the ATM machine that to withdraw money within their vicinity, it was rather unnerving.
i just think it’s unfair to choose such a location to beg or ask for donation. surely there is a polite way of forcing people to donate money?
p.s. and when it’s raining cats and dogs, all motorists are supposed to drive carefully, not recklessly!!!!! one stupid white proton iswara almost came crashing into my car on the right when “he” changed lanes too fast just now. and unfortunately i’m damn weak with the horn that instead of a loud *TOOOOOOOOOOOOOOOOOOOT* at the idiot, i only managed two lil *toot*. i felt so stupid!

11 thoughts on “strategic locations to ask for donation”