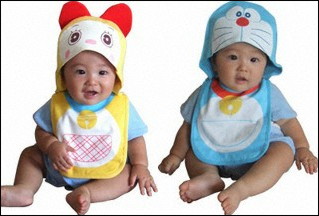 Would love to get these for my children next time!! 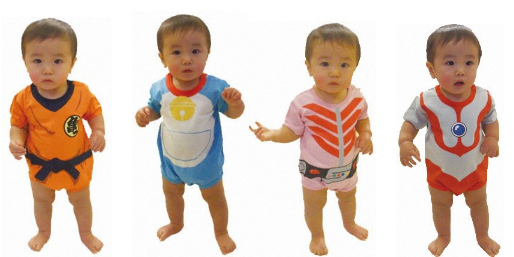 Bandai have just announced the release of a new range of cosplay baby romper suits featuring characters from tokusatsu and anime series such as Kamen Rider, Doraemon, Ultraman and Dragon Ball. The rompers come hot on the heels of a similar range of hoods and bibs released last summer and are extremely affordable at only ¥1,575 each. The characters chosen are designed to appeal to an older generation who remember these classic series with fondness and want to transform their tots into Super Sentai.

Given the popularity of cosplay in Japan, it’s not surprising that parents would want their kids to get in on the action. Take these Naruto babies and Death Note toddlers, for example. As well as anime, video game characters costumes are also a source of inspiration. Foreign fans of Japanese video games have handmade some awesome baby costumes such as this knitted Katamari Damacy suit or this Link baby costume for lovers of Zelda.

Naturally, many parents turn to the classics – Disney costumes and cute bear hoods – when dressing up their tikes, but what about those looking for slightly hipper threads? Hip hop gear is definitely on trend at Baboo Wear’s online shop, where parents can stock up on kid-size baseball caps and New Skool romper suits with a motif that makes your kid look like it owns a fat pair of headphones.