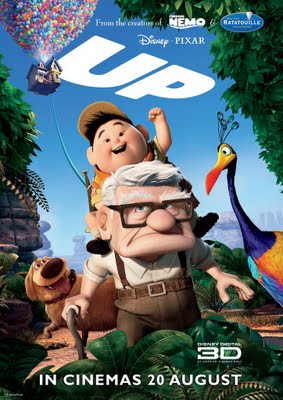 Couple of weeks back, A, Licia, WH and I wanted to watch Pixar’s new animated film Up. Few months back, I read a news about a dying girl’s wish to watch the show Up before she dies. Pixar had a private screening for her but she was too ill to open her eyes to watch the show. Her mum had to describe the show to her. She died 7 hours after the show. That really made me wanted to watch Up.

I was tasked to purchase the tickets and I got a good seat – right at the middle of the cinema.

A and I ran a little bit late hence we got into the cinema late. Fortunately, the show wasn’t about to start when we got there.

Once I sat down, a girl sitting next to me asked me for my ticket. I was puzzled but nevertheless I gave her my ticket and she returned it after looking at it.

Few minutes later, the girl asked for my ticket again. This time round I was a little bit annoyed and wanted to bitchslap her. But I gave her my ticket anyway.

Moment later, she said, “Sir, your tickets are for tomorrow…”.

Apparently, I was sitting on her friends’ places..we had to move.

So A, Licia, WM and I moved from our seats when the show was about to start. We decided to find empty seats and plonk our butts there. We found a row of empty seats 3 rows from the screen.

We were fortunate that the cinema wasn’t fully packed. We settled down with our pop corn and drinks.

As the movie was about to start, A said, “I dont think we’re in the right cinema…”.

WHERE THE F IS CARL FREDERICKSON?!?!