Global Gathering – Relive the moments at our post-party 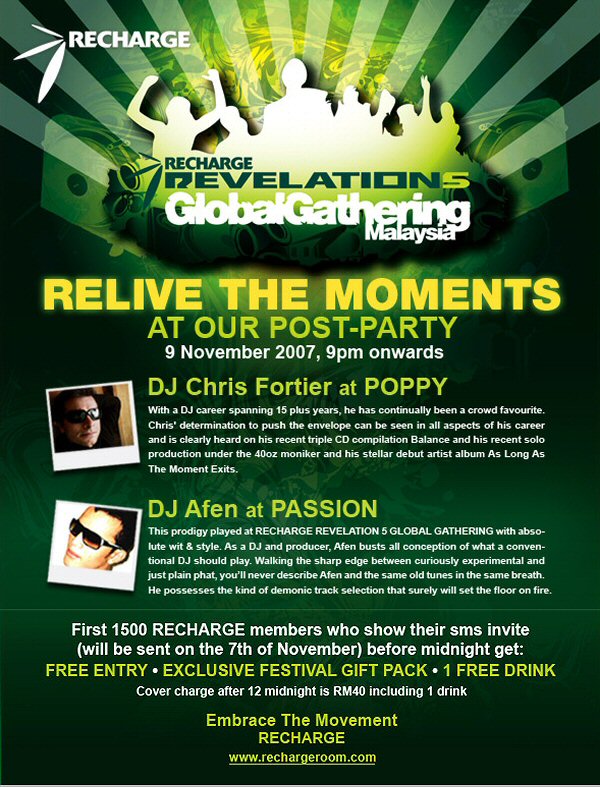 As some of you may know, the main event which was held at Melaka was a mud party. I heard it rained for 3 days in a row. The ground got so soft until it was knee deep. O_O
LIVE & LOUD KL 07 – The largest and Longest-running, Most Sensational Music Festival
Welcome to Live & Loud KL 07 – KUALA LUMPUR, MALAYSIA

A 10-day jam-packed music extravaganza featuring a wide range of genres and over 50 of the planet’s hottest artistes, with more than 45 hours of live music play; Live & Loud KL 07.
The festival starts 23 November stretching to 2 December, where each passing day greets festival-goers with a different genre, a different theme, a different repertoire, a different venue and most definitely different uber-stars.
The festival will feature the following performers such as:-
DIONNE WARWICK
One of the most popular and recognizable personalities and voices in music since the early Sixties, Dionne Warwick continues to enjoy a phenomenally successful and diverse career on record, in concert, on television, and as the host of a nationally-syndicated radio show; “Love-Notes From Around The World.”
WHITNEY HOUSTON
Whitney Houston is inarguably one of the biggest female pop stars of all time. Her accomplishments as a hitmaker are extraordinary; just to scratch the surface, she became the first artist ever to have seven consecutive singles hit number one, and her 1993 Dolly Parton cover “I Will Always Love You”
ELLIOTT YAMIN
Vocalist Elliott Yamin first gained recognition as the second runner-up on the fifth season of the reality show American Idol. Born in 1978 in Los Angeles , to a painter father and professional singer mother, his parents divorced when he was 14.
SHAGGY
Emerging in the early ‘90s, Shaggy was the biggest crossover success in dancehall reggae with his break-through hit “Mr. Boombastic”; his other smash hits including “Angel,” “Sexy Lady” and “It Wasn’t Me.”
K-CI & JOJO
Cedric and Joel Hailey comprise the romantic R&B duo K-Ci & Jojo, who were one of the two pairs of brothers that made up the chart-topping ‘90s group Jodeci.
KOOL & THE GANG
Kool & the Gang has sold over 70 million albums worldwide and influenced the music of three generations. Thanks to songs like Celebration, Cherish, Jungle Boogie, Summer Madness and Open Sesame, they’ve earned two Grammy Awards, seven American Music Awards, twenty-five Top Ten R&B hits.
JAMES INGRAM
Ohio native James Ingram saw his musical career kick start in 1980 with a demo tape; the song was “Just Once”, the composition delivered to Quincy Jones for a possible inclusion on Jones’ landmark album The Dude.
MINT CONDITION
Mint Condition is an R&B band formed in the late ‘80s, comprising of lead singer Stokley Williams, bassist Ricky Kinchen, guitarist Homer O’Dell, pianist Larry Waddell and keyboardist/saxophonist Jeffrey Allen.
JAMES TAYLOR QUARTET
James Taylor, founding member of the infamous group The Prisoners formed The James Taylor Quartet, often referred to as JTQ. JTQ’s first single in 1985, “Blow Up” was a huge success appearing on the Festive 50 Chart for three years running.
JAMES MORRISON
At the ripe old age of 21, James Morrison became an overnight sensation in the UK with the release of his debut album, Undiscovered, which wasted little time going platinum across the British Isles after it was released in the summer of 2006.
TAUFIK BATISAH
Muhammad Taufik bin Batisah, the winner of the very first season of Singapore Idol. The lad of mixed Indonesian and Indian descent, attended a local primary school and polytechnic in Singapore .
PROJECT POP
Dubbed the clowns of the Indonesian music industry, this sextet comprising of 5 guys and a girl deriving from a comedy group known as ‘Padhyangan,’ have managed to turn almost every song they perform into a side-splitting experience for listeners.
LIL’ G OF SILK
Gary “Lil G” Jenkins dipped his fingers in music from as young as seven years old by singing in church. From there he started mastering instruments with the tally reaching a total of 14 instruments, most of which were self-taught.
RICK PRICE
Rick Price is one of Australia ’s most accredited singer/songwriters with his trademark singles, “Not A Day Goes By,” “Walk Away Renee,” and “Heaven Knows.”
TOMPI
It’s hard to find a cosmetic surgeon that gets down and funky these days but some will drop the scalpel for a microphone when the feeling’s right.
Others:
Adibah Noor • Hazami • Dina • Mark Douglas • Anuar Zain • Camelia • Jaclyn Victor • Azan (Ruffedge) • Lah (VE) • Nikki • Mode • Dayang Nurfaizah • Maliq & D’ Essentials • Noryn Aziz • Joe Flizzow • Hannah Tan • Zainal Abidin • One Buck Short • Akademi Fantasia Talents • Malaysia Troupe • Troupe • Japan Troupe • China Troupe • Cambodia Troupe • New Zealand Troupe.
For more info: http://www.lnlkl.com
The Masquerade 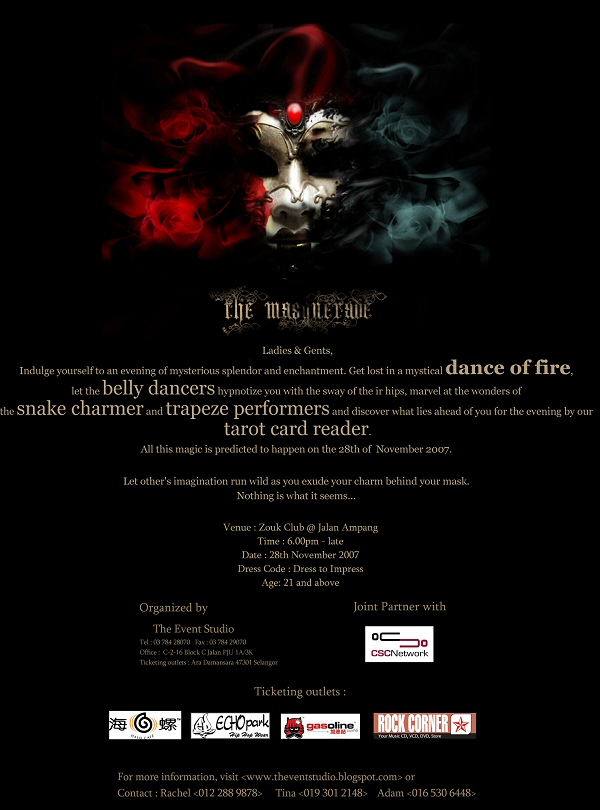 The Event Studio presents a Bachelors party “The Masquerade” for all the singles in town, to indulge yourself to an evening of mysterious splendor and enchantment. Get lost in a mystical dance of fire, lets the belly dancers hypnotize you with the sway of their hips, marvel at the wonders of the snake charmers and trapeze performers and discover what lies ahead of you for the evening by our Tarot Card Reader. All this magic is predicted to happen on the 28th of November 2007.
However, our party is promoted to corporate company, single organization, hip and trendy café in town. To makes this party has all variety of profession coming in different industry networking under the same roof.
Besides, we have invited Freda, the famous emcee (From Boom Boom Room Penang/KL) and Eric Chung, an experience magician which have more than 8years experience doing magic in Malaysia and Australia to serve you all night.
This event is joint partner with CSC Network which it located in “Golden Triangle” in the heart of Kuala Lumpur, and it also the most successful match maker in town, they have more than 11 years history and experience in match making, and successful rate is 80% and they have the widest network around the region. CSC network believe in understanding the clients need and tailored make program for individual in finding ideal partner walk right into the arms of their perfect match.
Halo Café, is one of our tight up ticketing outlet for our event, and it also a café that concentrate in building globalize Chinese musical kingdom in Malaysia, their daily mission which include excellent food and beverage, customer services, lifestyle, discover local talented artist and music event. Halo café have 9 outlets in Malaysia, which located in the capital of Malaysia states.
We are offering a package of 1 Mask and 1 drink per patron and as for VIP they will be entitled to 2 drinks and 1 mask to enjoy a mysterious ambience and mingle around. The pre-sale ticket would be RM55, door price RM65 and VIP RM120. Ladies and Gents for more info please log on to www.theventstudio.blogspot.com or call up 03-78428070.
Quench Your Curiosity and Let Your Soul Be Stirred! 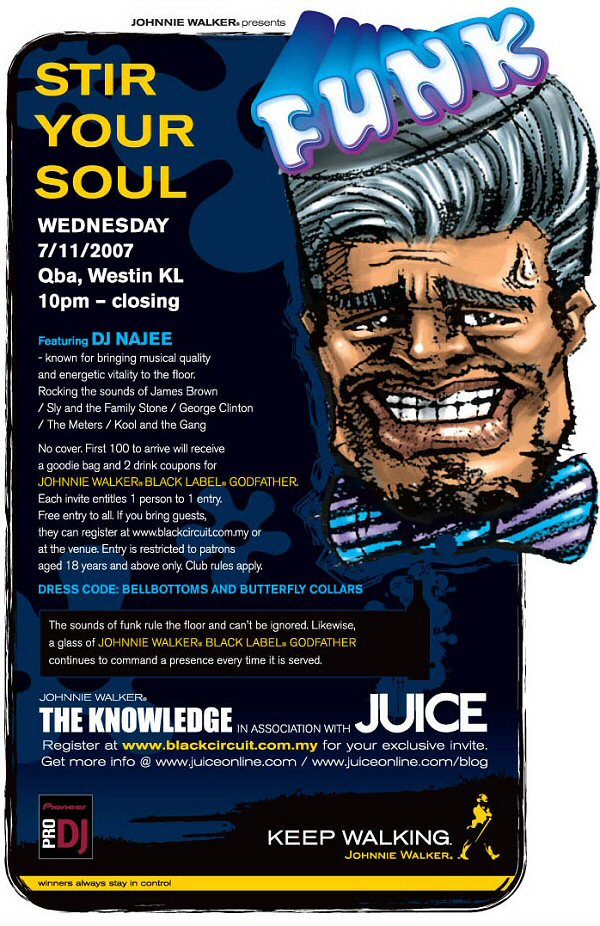 Unleash your soul to the nourishing play of DJ Najee’s impressive music quality and energetic vitality. DJ Najee is set to rule with the sounds of funk at the 4th Johnnie Walker® – The Knowledge, in association with JUICE. Rocking the sounds of James Brown / Sly and the Family Stone / George Clinton / The Meters / Kool and the Gang, this man has a reputation for exploring only the finest music repertoire.
Funk with DJ Najee at Qba, Westin Kuala Lumpur on November 7, 2007 from 10.00pm till closing. Free entry to all, no cover charge, cool door gifts for the first 100 to arrive plus 2 free drinks of JOHNNIE WALKER® BLACK LABEL® GODFATHER cocktail.
Register at www.blackcircuit.com.my for your exclusive invite.
Dress Code: BELLBOTTOMS AND BUTTERFLY COLLARS
Note: Entry is restricted to patrons aged 18 years and above only. Club rules apply.
Return of the HARDSTYLE @ Baze Club 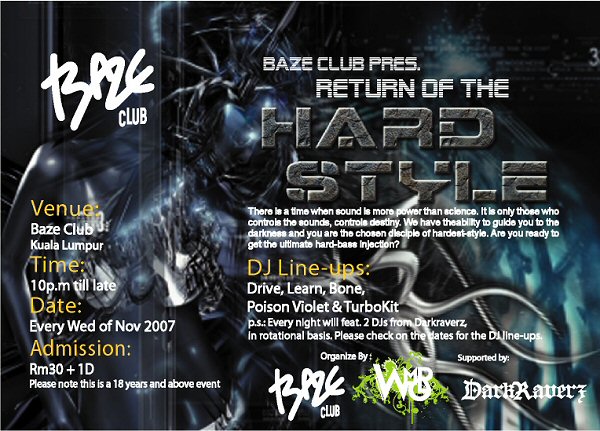 Year End Party 2007 presented by [X]oun[D]reaMz
Lastly, something for the kids in December 2007. 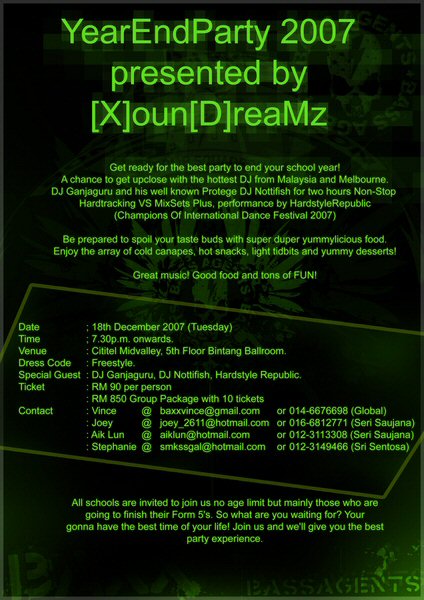