The game scheduled to start at 8pm but the crowd started trickling in at 4pm. My futsal kakis and I reached there at 645pm and the roads towards to stadium was congested! 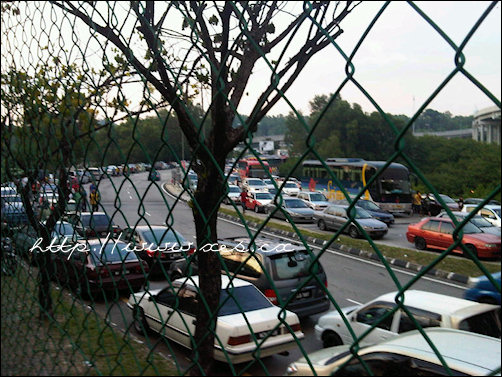 We parked our cars at one of the housing areas of Bukit Jalil. It took us 15 minutes to walk to the stadium. We were soaked with sweat by the time we got there! 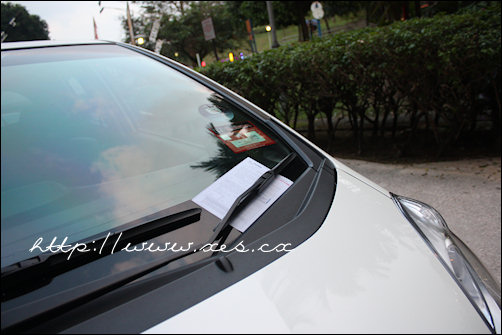 Policemen issued summons to those parked on the roadside. 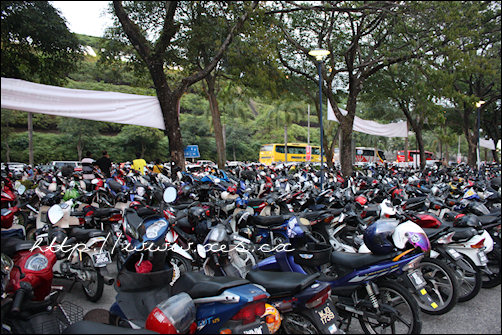 Motorcycles were parked all over the roads. We had to climb over them to get through the stadium -_-

As we were approaching the stadium, thunderous roars of adorning fans were heard. The excitement builds as we reach the entrance. 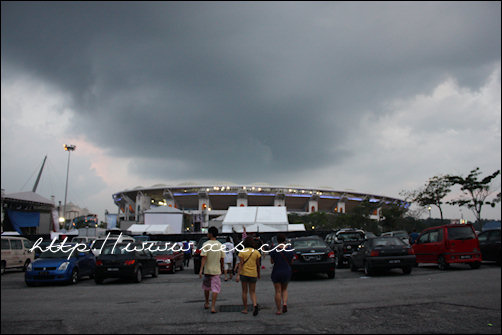 Screams and shouts of street vendors were heard as well. I haven’t had my lunch and dinner before the game. Ping said there’s KFC sold over there. I found KFC – Kelantan Fried Chop. 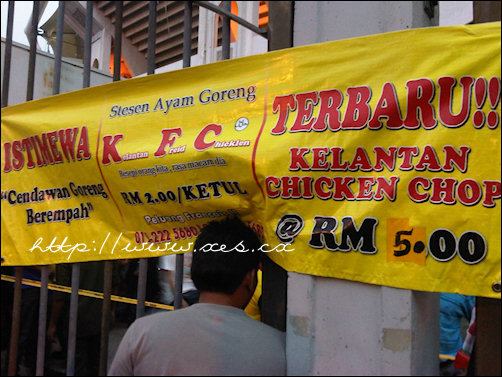 The stadium was extremely packed. It was very difficult for us to find a seat. I wouldn’t recommend anyone to bring their parents, wives, girlfriend or children. They’ll probably get squashed or “water kena stolen” (chau sui – molested)

We had to sit on the floor – by the walkway. Usually there is enough space for people to pass but this time round the space was occupied as well. Basically, one cannot walk through the lane without kicking anyone. 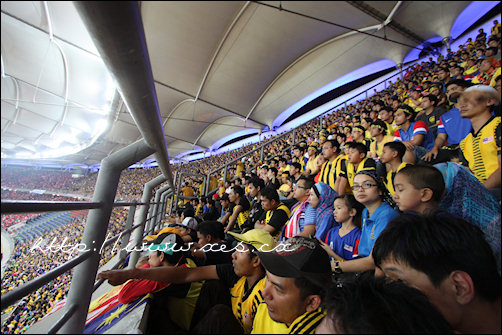 I managed to secure a spot just right in front of the railing. But after squatting and sitting throughout the first half, I decided to shove my legs through the railings and sit on the concrete base. My butt was numb thereafter -_- 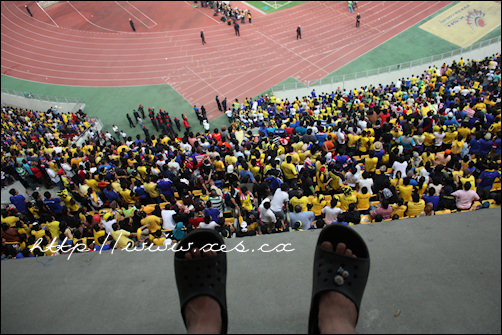 I was worried that my sandals will fall down…

I wonder if tickets were oversold because seats were all taken and people had to sit and stand at all sorts of places. 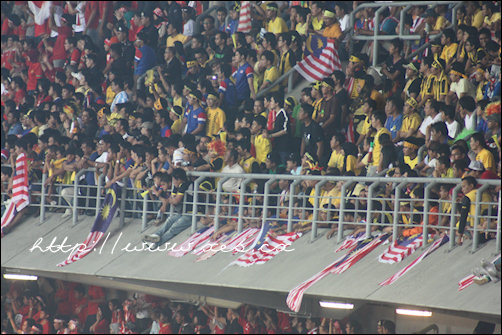 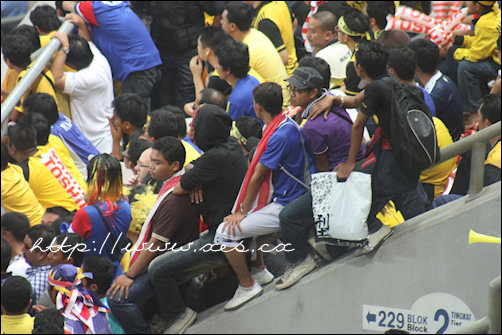 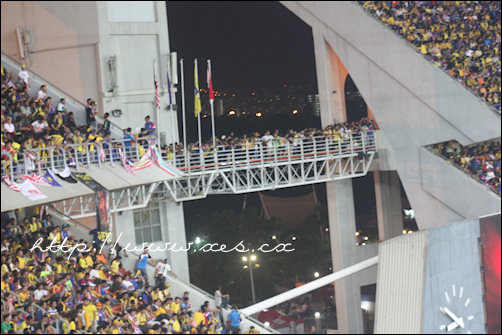 Some stood on the fragile-looking-shaky bridge. It shakes whenever someone walks on it. Further, you can see what is underneath the floor. 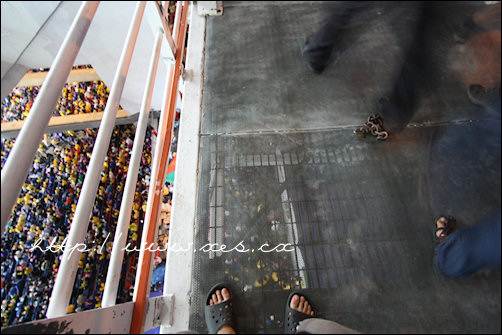 Anyway, I had a bird eye’s view of the field! 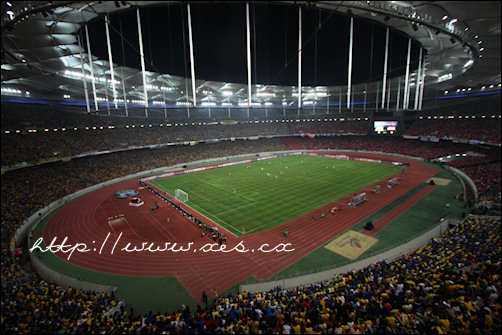 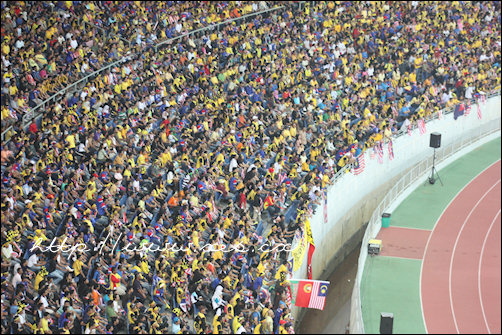 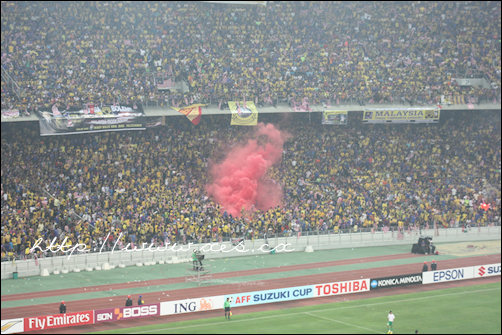 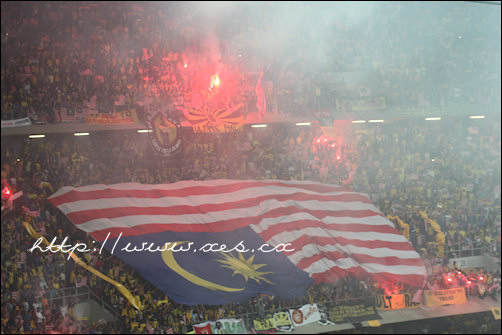 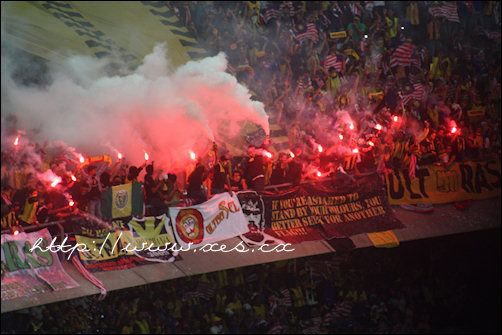 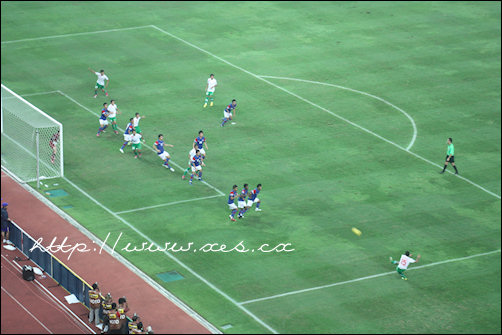 First corner of the match! 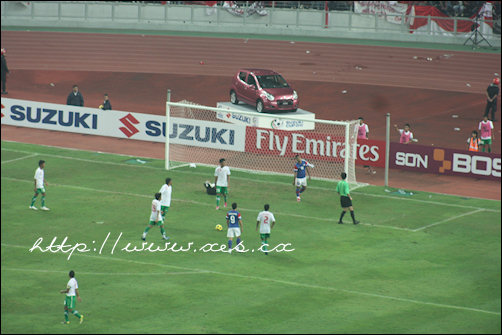 There’s a Suzuki Swift behind every goalpost! 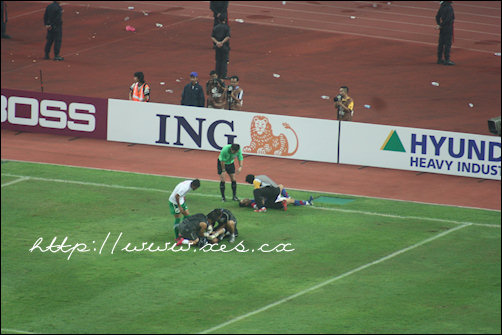 The game was stopped for a few minutes because the Indonesian players complained that they were distracted by a green laser light. It continued thereafter but the added extra time was 8 minutes. Longest I’ve ever seen!

Video of Indonesian players walking out from the pitch

Malaysia scored the first goal during the second half. The fans roared with excitement and relieve. We thought we would have a draw in this game.

But the downside of a goal is that some people would hurl mineral water bottles to the pitch. Some bottles don’t go far and ended up on someone’s head.

Video of all the goals. 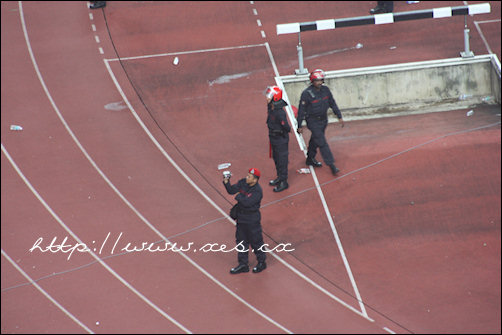 Police was there to record down disturbances – or maybe just a blank camcorder to scare people. 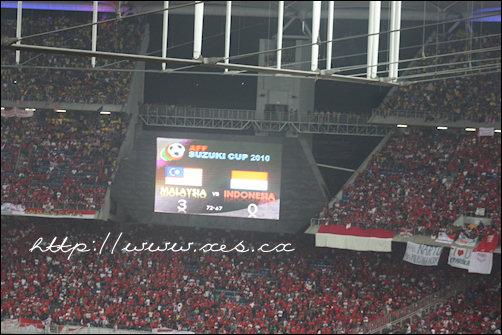 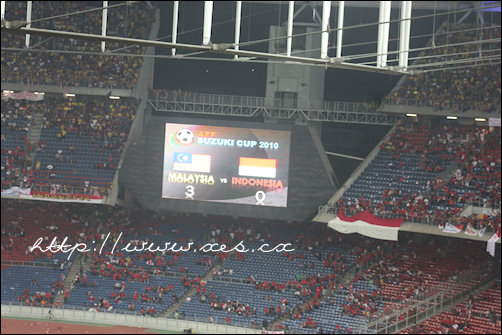 Notice the seats were vacant before full time? Many Malaysians moved to the Indonesian reserved terraces. It was a like a game of checkers.

After the game, many Indonesians were pretty unhappy over the laser incident. So much so #MalaysiaCheatLaser became the highest trended topic on Twitter!

2nd leg of the finals will be played in Indonesia on 29th December. Hope Malaysia will win again.