We played football at Milton just now. We played against an Asian team and a mixed team (Peruvian, Bolivian, French, etc). Any team that scores first will be entitled to remain on the pitch. We could easily beat the Asian team but we lost to the mixed team twice. In both games, the mixed team scored in just few seconds! We exited the pitch shamefully. We played till dark, until we couldn’t see the ball and people. There were few mishaps such as banging into each other and tripping.
After football, we had dinner at this place called Spice house in Milton. The owners (husband and wife) are very nice and friendly. They gave us prawn crackers and dimsum while waiting for food to come. I had sweet and sour pork. Boy, their sweet and sour pork is really nice, it’s one of the best I’ve tried!
– 10:00PMClubbing was fun. Kiang, Elaine, Mien, Umeng, JinHan, Hen, Soon Loong and I went to this club called Family. Apparently it’s one of the good clubs around. The club has 3 floors with 3 rooms namely the main room, Hard House room and the chill out room. The hard house room is a suffocating small foggy room while the chill out room is mainly a bar. We had couple of drinks before heading to the hard house room. Their drinks are horrible. A vodka redbull cost me $11 and their jedi coke tasted awful. I even felt like puking when I was on the dance floor!

Kiang and Him has been showing me the Brisbane dance ever since back in Kuala Lumpur. And today, I was able to witness it! Almost everyone could do the Brisbane style (probably cause it’s easy to dance)! Due to the fact that the hard house room is hot and suffocating, we headed for the main room. Initially, someone told me that the main room plays R&B. However, it soon turned into trance and lastly into hard house and techno.

There were more locals that Asians in the club. It reminds me so much of UK. Sometimes the locals would be so fucked that they would just come up to you and shake your hand. However, according to Umeng, he saw this local trying to get close with 2 local guys. The guy annoyed the latter and soon they smashed the guy’s head onto the wall. On another occasion, we had a local trying to get friendly with Mien (she’s a friend of Kiang). He kept on touching and dancing with Mien and she was trying to avoid him. We got up and approached the local and he left within seconds (however, he soon found another Asian girl to molest).

By 3:30AM, all of us were exhausted and we headed home. We shared a taxi van with a gay couple. They were hugging and touching each other and kept on talking to us. They even go till the extent of touching Umeng and Hen!
– 5:58AM

Hen came down to Brisbane from Gold Coast. He’ll be staying here until Saturday. Kiang, Umeng, Soon Loong, Jin Han, Hen and I had our customary drinking session. We were playing uno the whole night and the loser has to bottoms up a mixture of Sprite and Smirnoff. The winner will also be entitled to draw graffiti on the loser’s hands. I drew a penis on Hen’s hand. hehe. 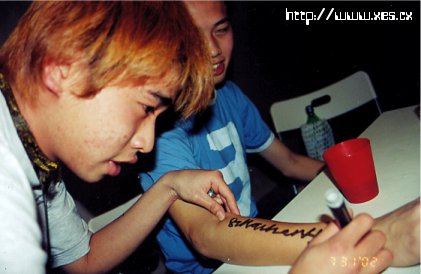 We went wild for few hours, running around and laughing the whole night. 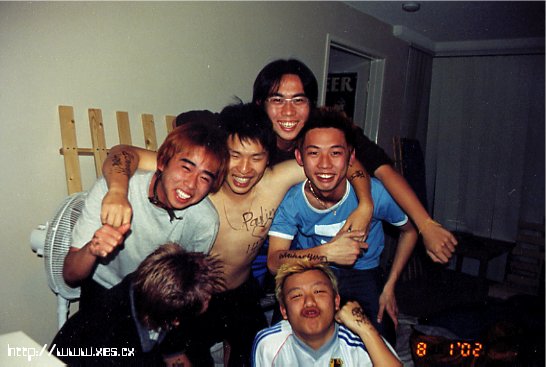 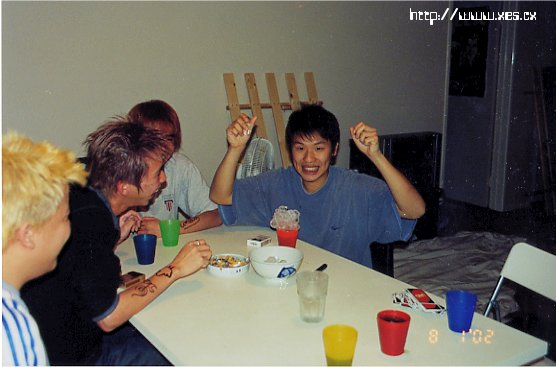 After 3 hours, we were totally drunk. We shifted the beds from the rooms and placed them on the living room so that all of us could sleep together. 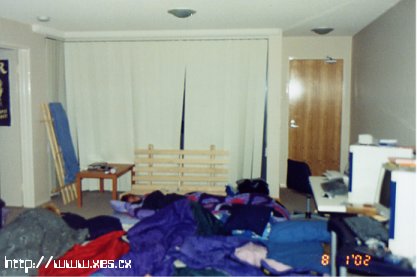 However, Umeng couldn’t make it to the bed (he was too drunk), he ended up on the floor till the next morning.
– 1:07AM

We didn’t do much today. Soon Loong and Umeng couldn’t wake up for the early classes due to yesterday’s heavy drinking session. We ended up in the city; walking around and shopping. Hen bought a backpack and I bought a Bota bag (the traditional Spanish wine skin) from a shop selling army accessories. The shop also sells gun replicas (damn they’re heavy!), Samurais swords (aud199 to aud300, wanted to get one but don’t think I could get it through Malaysia custom), crossbows, Mao caps, etc.

Soon Loong has been telling me about the arcade in Brisbane. He was saying that the players arent good at all. We then walked to a video arcade nearby. I was glad to see a King of Fighters 2001 machine there. Its been weeks since I played a game! I happily inserted 2 tokens to challenge someone. However, within few seconds, I regretted playing. Their fucking buttons are all mixed up! I couldn’t play properly! Predictably, I lost and I left the place disappointed.

They brought me to this place called King George’s Square (its in the city itself). It’s a small garden with fountains and statues scattered around it. And there also lies a huge clock tower next to the garden. We took couple of pictures before returning home so that Hen could cook dinner. His soy chicken and mushrooms is really good!
– 1:42AM

I just had dinner at Sunny Banks (a suburb in Brisbane, about 30minutes from the city). My friends and I had dinner at this small food court which has Vietnamese food, Taiwanese food, Chinese food, steamboat etc. Sharon (oinkie) and her cousin joined us for dinner. Her cousin is only 20 years old this year but suprisingly, she owns a cybercafe in Toowong, drives a big black Holden (some Aussie car) and has her own lawyer. Sounds like a very successful person. However, Sharon told me that her boyfriend died not long ago from an incurable cancer disease. Poor girl. However, throughout the conversation she seems cheerful. And she even gave me a ride on her Holden! Cool!

I had a quick photo session in the evening. My friends took me to South Banks. According to them, it’s one of the great places to take pictures. The city’s panoramic view can be easily admired from the walkway of the bridge that crosses the Brisbane River. However, due to the fact that it is still winter, it gets dark quickly. By the time we reach South Banks, the sun has already set. I was hoping to take some pictures of the city on a sunny day. But i guess I’ll just go on with the photo session. I managed to finish my first roll of film for this Aussie backpacking trip. yay!
– 11:12PM

I did not sleep a wink during the journey. Singapore Airlines provides really good movies. I watched Austin Powers 2, Mr Bean, Ice Age and Spirit. By the time I finish the movies, there was 2 hours left before arrival. I decided to sleep for a while. However, after few seconds of dozing, bright lights were turned on. Frustrated, I decided not to sleep at all!

Umeng was waiting for me in the airport. We took a train back to his place at Toowong. It seems that all my friends here dyed their hair. Kiang dyed purple, Yong Lin and Jin Han dyed blonde (ah beng!), Umeng dyed dark brown, Soon Loong dyed hazel brown and Him dyed a mixture of brown and blonde. I guess I’m the only decent one left.

I followed them to University of Queensland. In my opinion, the uni is much bigger than Melbourne Uni. Even their food court is much bigger! I have always wanted to go for an architecture class. Umeng and Soon Long are studying architecture. I decided to follow them for one of their classes. However, within half and hour, I dozed off.

We headed for lunch after class. The uni sells various type of food ranging from Asians to Western food. Feeling famished, I had a big piece chicken teriyaki sushi and fish and chips. We had lunch at one of the nice huge cafeteria. It was spacious, dimly lighted by the natural sunlight and clean. We spend hours talking and joking. I hadn’t been laughing so much ever since!

We headed for Chinatown next. Brisbane’s Chinatown is much smaller than Melbourne’s Chinatown but it has more Chinese monuments. Umeng bought some groceries before we head to Elizabeth place in the city to meet up with Sharon aka oinkie. She was telling me the places to go to. She looks better and better from the day I met her. I bet she’ll grow up into a gorgeous lady in the future!

I was exhausted in the end of the day. It was as if my body is going to shut down. Thank god I took a nap when we got back home from the city. However, hours later, I woke up finding that I was completely confused, no idea where I am. I totally forgot I’m in Brisbane!

Dinner was almost ready when I woke up. Right after dinner, we watched tv, went online, played computer games etc. Damn, it’s great to live in a bachelors house.
– 10:10PM

I’m leaving for Brisbane in few hours time. See you guys there!
– 1:47PM