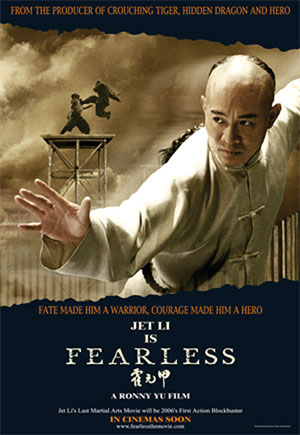 Based on the life of Martial Artsmaster Huo Yuanjia (1868-1910), this biopic is set during the late 1800’s to early 1900’s, a pivotal period in China’s history, when the whole country is shrouded under increasing internal turmoil and the imminent threat of foreign invasion.
Huo Yuanjia begins the story as a cocky, young Martial Arts practitioner with only one thing in his mind, to become the best at his craft at all costs. His quest eventually leads to a tragedy when he mistakenly kills an opponent whose disciples consequently slaughter Huo’s whole family for revenge. A distraught and heartbroken Huo flees to the countryside, determined to abandon everything he ever wanted and believed in. He then spends considerable time in a remote mountain village anonymously, where he relearned all the things that matter in life while taking refuge with an old lady and her half blind granddaughter. He returns to the city to make amends with his turbulent past, and gets swept up in a violent, fight to the death Martial Arts tournament to defend China’s honor against foreign aggressors.
Official Website: www.fearlessthemovie.com
Trailer: http://www.fearlessthemovie.com/video/index_hi.html
I used to love Jet Li’s movies, especially those movies where he played Wong Fei Hung (Once Upon a Time in China). But his recent movies were crap, stupid Hollywood spoiled his great kungfu moves. I notice that in Jet Li’s movies, there are loads of African American. As compared to Jacky Chan movies, there are more Caucasians!
Also, I recently watched this Chinese movie by the name SPL. 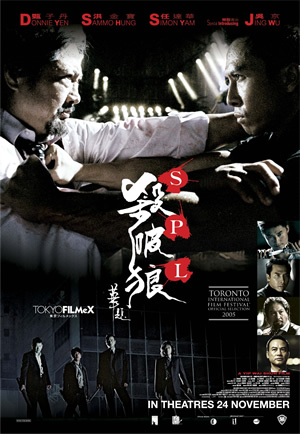 Synopsis: A man that will do anything to keep his criminal empire, a man that walks the fine line between ‘protect and serve’ and the very element he stands against, and a man pushed to excel in the shadow of personal failure. None are left unscathed.
Chan’s [Simon Yam] sense of justice and self-imposed personal duty tests his adherence to the principles he upholds as a policeman.
The head of a specialty police unit, he is nearing retirement, yet his adopted daughter is a constant reminder of a crime boss that won’t go gently into that good night. Moreover, Po [Sammo Hung] has evolved since that time, becoming more and more of a kingpin and growing increasingly untouchable. Chan can’t walk away without setting things right, but they have nothing on him. Knowing Po was behind the murder and destruction of evidence that orphaned his adopted daughter, Chan is torn by doing what he knows is right, yet he manages to keep his actions within the law despite temptation.
Ma [Donnie Yen] will take Chan’s place as head of the unit, and joins shortly before Chan’s retirement. Ma might be seen as a by the books cop, but he wasn’t always like that and the escalating confrontation between Chan and Po tests his resolve to stay out of the shadow that haunts him. It’s that same resolve that causes Chan and Ma to not see eye to eye on things when they manage to grab Po, but they won’t be able to keep him. With time sifting through the proverbial hour glass both men’s integrity is tried as Po’s patience wears thin- the result has bloody consequences.
Simon Yam, Sammo Hung, Donnie Yen along with Wu Jing star in this new dark, gritty actioner directed by Wilson Yip.
Official site with trailer: http://www.shapolangthemovie.com/
BRILLIANT SHOW albeit a little violent. It’s so violent till my pirated DVD censored some violent parts.
But fuuuuuhhh…Donnie Yen is damn bloody yau ying (COOL)!
siffuuu!!!!!!!!!! Please teach me martial arts!!!

I would recommend all martial arts lovers to watch this movie!